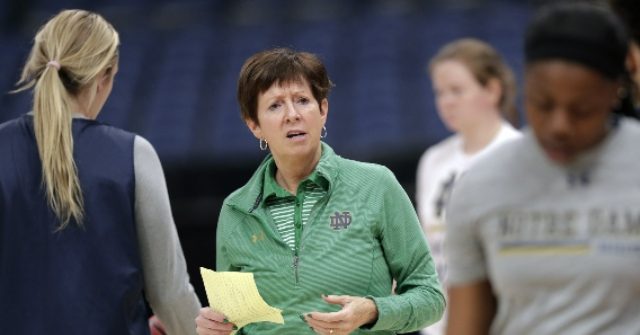 The head coach for Notre Dame’s women’s basketball team says there aren’t nearly enough women in positions of power, and she’s not just talking about basketball.

In response to her recent statement that she would never again hire a male coach, a reporter asked how seriously — especially in light of the passing of Tennessee coaching legend Pat Summitt — she takes her role as being a powerful voice for women in sports.

“Did you know that the Equal Rights Amendment was introduced in 1967 and it still hasn’t passed?” McGraw told reporters. “We need 38 states to agree that discrimination on the basis of sex is unconstitutional. We’ve had a record number of women running for office and winning, and still we have 23% of the House and 25% of the Senate.”

Muffet McGraw: A voice for women.

The lack of female leadership in government and society, as McGraw sees it, poses a challenge when it comes to identifying powerful women for her players to emulate.

The Notre Dame coach believes that a big part of the problem can be traced to how women are taught to defer to men at a young age.

“I think women need to have more confidence and apply for jobs. I think we wait to be asked,” she explained. “It goes back to high school when you’re waiting to be asked to the prom. I think women go after jobs in a very different way than men do. We want somebody to pursue us rather than really going for it.

“Girls are socialized to know when they come out, gender rules are already set. Men run the world. Men have the power. Men make the decisions. It’s always the man that is the stronger one.”

McGraw does not have a single male coach on her roster. A fact that can be attributed to policy, not chance.

How does McGraw propose women help each other to advance?

“I think when people get to a certain position, they need to be able to reach down and pull somebody else up, they need to be better mentors,” she said. “I think we can do a lot more on networking. Guys have that down. They help each other. They know how the system works. We don’t.”

The numbers McGraw references when it comes to the percentage of women as CEO’s and members of congress, are generally accurate. In 2018, 24 women were listed as the CEO’s of Fortune 500 companies. That number was down from the previous all-time high of 32 in 2017.

While she’s also accurate in her characterization of female representation in congress as being about 25% of both houses, McGraw would have done well to add that those are all-time highs. In addition, the numbers have increased substantially in recent years. For example, in the Senate, 29 of the 56 women who have ever served in that branch assumed office in 2000 or later. Joe Biden Rides His Bike in Front of Reporters on the Beach, Refuses to Take Questions