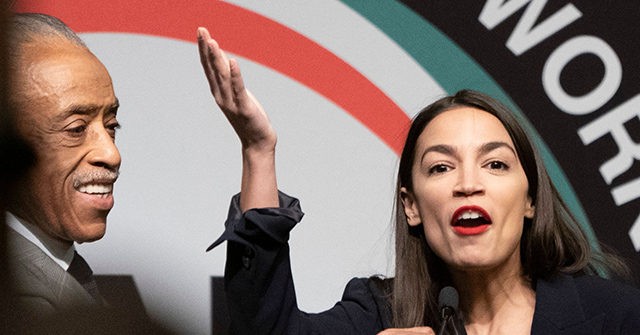 “This is what organizing looks like. This is what building power looks like,” Ocasio-Cortez said, complimenting organizers on the convention’s turnout. “This is what changing the country looks like. It’s when we choose to show up and occupy the room, and talk about the things that matter most, talking about our future.”

The avowed Democratic-socialist seemingly addressed criticism of her thin resume before her election to Congress, saying that she was is “proud to be a bartender.”

Some commentators took to social media to poke fun at the attempted transformation.

I HAVE 😳SECOND 😳HAND EMBARRASSMENT 😳CHILLS 😳 @AOC 😭LISTEN 😭TO 😭YOUR 😭SELF https://t.co/ZeBmfAGteE

Fake Blackcent alert! Wow. Cringe. Thought she might drop the n word at the end there for a sec … https://t.co/xMptI56WLL

.@AOC is literally me in middle school trying to talk with an accent in a shameless attempt to earn approval of the cool black guys.

This is just sad. What is y’all doing?pic.twitter.com/Rz0cxHywIL

Several black conservatives took offense, including Lawrence Jones III — a Fox News contributor who had a dust-up with Ocasio-Cortez Thursday night over a photo of him wearing an armored vest at the U.S.-Mexico border.

Hey, @AOC I wore the vest because CBP told me to but, what’s your excuse for talking like this?! #WedontTalkLikeThat https://t.co/4i5qQLNbNZ

Consider the audience at NAN and listen to the accent and inflection https://t.co/djlOyfy3TU

AOC’s maneuver drew comparisons to failed 2016 Democrat presidential candidate Hillary Clinton — perhaps the most often-cited example of a political figure faking an accent to pander to voters. In a 2007 speech to an African-American church in Selma, Alabama, Clinton’s southern accent was painfully apparent during her remarks: “I don’t feel no ways tired. I come too far… from where I started from.”

Who has the worst, pandering fake Southern accent?

(I’ve made a little video for you to be the judge) pic.twitter.com/aEihBjLhTO

Clinton’s fake southern dialect became a national punchline, even as a running gag on one South Park episode — yet she brought it out of semi-retirement in March 2019 for a speech in Selma, Alabama.