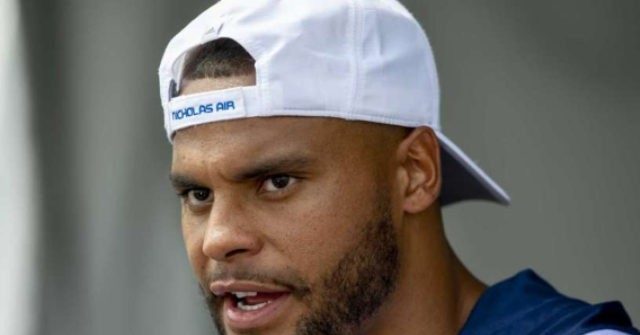 The Dallas Cowboys’ Dak Prescott almost ended up with a few dead dogs when police arrived armed with rifles after the player’s dogs were reported for attacking a neighbor.

Police were called to Prescott’s block in his Frisco, Texas, neighborhood in February when his two pit bulls escaped from the player’s house. The dogs entered a neighbor’s property, attacked the neighbor’s dogs, and when the woman tried to stop the dog fight, one of Prescott’s dogs bit off the end of her finger.

When police arrived on the scene they were armed with rifles and body cam video shows that one officer almost shot one of Prescott’s dogs when the dog approached, TMZ reported.

Prescott’s dogs were eventually taken into custody and put into quarantine while the woman’s injuries were treated, and police mulled charges.

“Upon arriving on scene officers were able to locate and capture both loose dogs,” the Frisco Police said in a February news release. “During the investigation officers discovered that the dogs were owned by Rayne ‘Dak’ Prescott who was not home at the time of the incident. Officers determined the dogs were able to escape the nearby residence through an unsecure door.”

The police bodycam shows one officer approaching one of the dogs with his rifle cocked and ready. The officer can also be heard yelling at the dog to “get back” when it began to walk toward the officer.

Fortunately, the situation was defused when Prescott’s friend came up with a pair of leashes for the dogs and was able to leash them without incident.

The Cowboys quarterback is in his fourth season with the team and made his second Pro Bowl appearance in 2018. The 25-year-old has one year left on his rookie contract.