Breitbart Texas editor Brandon Darby was locked out of his account by Twitter Friday after he posted a link to one of his stories on Breitbart News, about a gruesome beheading that took place just south of the Texas border. 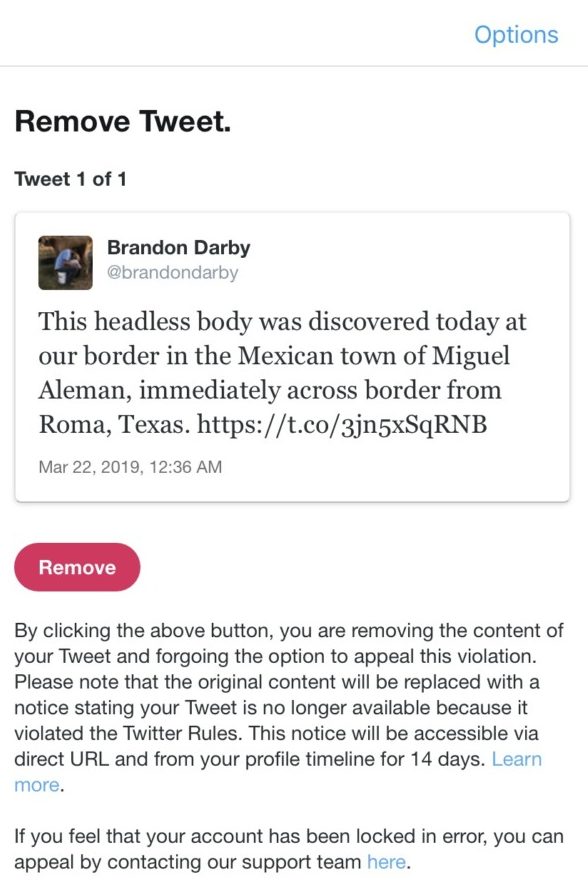 Commenting on the Twitter lockout, Darby said that Silicon Valley has too much power over news.

“There are maybe three or four Silicon Valley executives who get to decide what news or images can be posted on social media. That’s too much power in the hands of an unaccountable elite.”

“At the very least, Twitter should allow journalists to tag individual posts for graphic content so that users are warned in advance — many of our stories at Breitbart Texas do contain graphic imagery, because brutal violence is the reality of life for Northern Mexicans who live under cartel tyranny.”

However, these rules on sensitive content don’t appear to apply in some cases. Pictures of maimed or wounded children in conflicts like Syria are allowed to spread on the platform without the requirement for a “sensitive content” interstitial.

A source familiar with the situation said that Darby’s tweet was deemed to have violated the platform’s “gratuitous gore” policy, although the policy itself states that limited exceptions will be made if the rule-violating media “relates to a newsworthy event.”

A Twitter spokeswoman told Breitbart News that the company is “exploring ways to provide additional context around tweets that violate our rules but are newsworthy and in the legitimate public interest.”