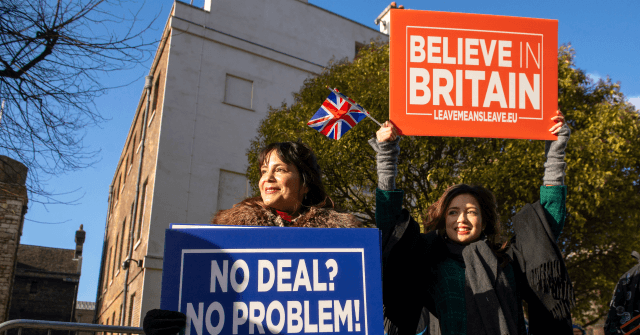 The Government minister who was responsible for No Deal planning at the Brexit Department says that Britain is “officially ready” for a clean break with the European Union.

Chris Heaton-Harris MP was Parliamentary Under-Secretary of State at the Department for Exiting the European Union (DExEU) until April 3rd, when he resigned in response to Prime Minister Theresa May announcing she would request a second Brexit delay from the European Council, suggesting that bureaucrats had purposely failed to inform her of all the No Deal planning which is in place.

Mrs May’s decision to abandon her previous position that “no deal is better than a bad deal” and suggest she would submit to a customs union with the European Union to win the support of the hard-left Labour opposition for a deal “obviously makes my job in Government [as minister overseeing No Deal planning] irrelevant”, Heaton-Harris said in his resignation letter.

After much contemplation, I have decided to leave Theresa May’s Government. I’m grateful to the PM for giving me the opportunity to serve the UK and I will continue to represent my constituents as the MP for Daventry. pic.twitter.com/sHkVhwJ7bb

Now, in a hard-hitting article published in The Telegraph, the MP for Daventry has again pressed home that “Hundreds of civil servants had been working for over two years to ensure we would be ready [for No Deal], but parliamentarians and others who are doing everything they can to stop Brexit needed to maintain a narrative that leaving without a deal would be a ‘disaster’ for jobs and our economy.”

The Brexiteer described “very well advanced” plans to deal with any potential disruption of trade across the English Channel — by the European Commission and the French government, as well as British officials — and that there would be no killer blow to so-called “just-in-time” supply chains should the country revert to trade with the EU on standard World Trade Organization (WTO) terms — otherwise known as a “clean” or “No Deal” Brexit.

He stressed that there had even been “open days for the media to demonstrate how ready both countries are to leave without a deal” at new Anglo-French border facilities — little-noticed by a mainstream media more concerned with tall tales of Mars bar famines and a barrage of space debris following Brexit.

The former Brexit minister’s reassurances echo those given by an anonymous Civil Service whistleblower, who revealed in late 2018 that “claims that we will all ‘crash out’ over the white cliffs of Dover into the Channel at 11 p.m. on 29 March 2019” — when Britain was originally scheduled to leave the EU — “and wake up to certain chaos and doom… is absolutely untrue, as anyone who, like me, has been involved in Brexit work for the past two-and-a-half years in Whitehall will tell you.”

“[O]f course no-deal preparations have been made. Very detailed plans have been proposed, assessed, analysed to death and finally agreed by working groups and steering groups and directors’ boards and cross-Whitehall talking shops. They have then been sent to ministers for approval. And they are now being executed,” the official disclosed.

“To claim otherwise is to equate the United Kingdom with a tinpot dictatorship where officials tote machine guns,” he added — suggesting that members of the public and Members of Parliament were both being misled about the how well-prepared the country was for No Deal, likely in order to bounce them into falling in behind Mrs May’s unpopular Withdrawal Agreement.

Fmr. Bank of England Boss Mervyn King: No Deal Brexit Is the Answer, Project Fear Is a Myth https://t.co/Z5gF3QpzNK