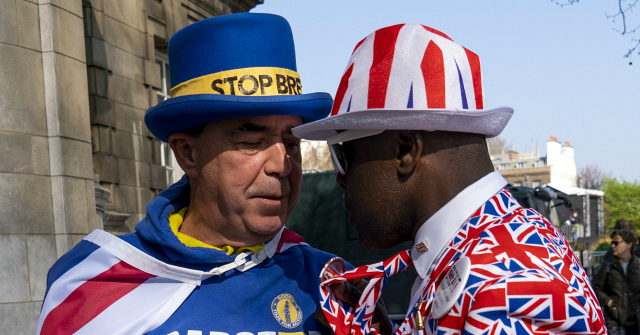 Here’s a poll that should terrify Conservatives:

Interested to know, Tory votes, would you vote Tory or for the Brexit Party in the potential Euros? Please r/t so we can get an accurate Poll to help Tory MP’s focus on the task at hand

Over 20,000 people represents a pretty sizeable polling sample. And 92 percent is a significant majority of Conservative voters who will be seeking to punish their own party in the likely Euro elections by voting for one of their more strongly Eurosceptic rivals — either Nigel Farage’s Brexit Party (the only other option offered in this ad hoc poll) or UKIP.

The Conservatives are going to get creamed if and when the next Euro elections happen, of that there’s no question. Their natural constituency won’t easily forgive the party for betraying Brexit in the way that Theresa May and her Cabinet of Remainers have done.

But the bigger question is: what will happen when Conservative voters’ loyalties are tested in a general election?

It’s a very important question because on the answer depends the fate of Britain.

For the last few days I’ve been fighting a running battle on Twitter with Corbynistas over a mocking Tweet in which I made light of their Dear Leader, the Magic Grandpa.

How is it wrong for the Army to train against terrorist-supporting, Jew-hating, Commie revolutionaries? Don’t get the fuss https://t.co/05NEpeNobH

The response from Corbyn’s rabid following gave me a terrifying insight as to the kind of people who would be running the country if Corbyn’s Socialists ever got their sweaty hands on the reins of power. Led by the hard-left demagogue (and creepy television pussycat impersonator) George Galloway, they actually tried reporting me to the Metropolitan Police for what he laughably called “incitement to murder”.

No, Tibbles. There is a world of difference between soldiers in Afghanistan letting off steam by firing wax rounds at a paper target image of Labour leader Jeremy Corbyn and someone firing actual bullets at the real-life Jeremy Corbyn. The difference, for the very very stupid and for fans of Jeremy Corbyn — but I repeat myself — is that one is a piece of paper which feels nothing and doesn’t actually die, and while the other is a real human being.

Tweeting that you’re really pretty OK about someone firing wax rounds at a bit of paper with someone’s head on it is not, by any definition, incitement to murder. At best, it’s a case of lèse-majesté — affronting a political figure’s dignity — which is traditionally what we like to do a lot of in Britain, and isn’t currently illegal, though no doubt this will change if Corbyn gets in.

I mention this, not so much to invite your sympathy for all the nonsense I’ve had to put up with from gibbering, fascistic Corbynite loons as to illustrate the very real menace of what would await us in a Corbyn-led Britain.

These people have no regard for truth, no sense of proportion, of justice. Certainly they have no sense of humour. And they’re worryingly comfortable about violence too — so long as it’s by people they approve of, be it Antifa (quite a few of the Corbynistas who Twitter mobbed me have tweeted exultingly about “punching Nazis” ie anyone to the right of the hard left) or the terrorist organisations such as Hamas and the IRA (whom both Corbyn and his even more left-wing sidekick John McDonnell have supported in the past).

Economically and ideologically, these tinpot Communists are a joke. But they’re a joke that we have to take seriously because if they gain power they will start doing all the things that Communist regimes always do: curtailing freedom of speech — perhaps even to the point of imprisoning opponents on trumped up charges; bankrupting the economy; bullying their opponents into silence with brownshirt-like terror tactics.

The majority of people in Britain understand this. There is no general appetite for our broadly free market democracy to be replaced by Venezuela-style collectivism. But collectivism, nonetheless, is what Britain may get because of what political analyst Matthew Goodwin correctly identifies as the “perfect storm” threatening the Conservative party with its greatest existential crisis in living memory:

Today, the dark clouds that are swirling above Britain’s most successful party are visible to all; the government’s disastrous handling of Brexit; a Cabinet that is deeply split; a parliamentary party that has fractured; a Conservative electorate and membership that are at logger-heads with their leaders; a rebooted and well-funded populist Right under a re-energised Nigel Farage; and a fundamentally damaged Conservative brand. At no other point in Britain’s post-war period has the Conservative Party looked so vulnerable.

You may say the Conservatives have brought this disaster on themselves. And you’d be absolutely right. To my mind this goes far beyond Brexit — which merely brought matters to a head.

The rot set in a long, long time ago when the Conservatives decided that they no longer wanted to be conservative.

I talk about this in more detail here. this must-read essay by David Eyles at Country Squire titled Post-Brexit Tory Doom.

This tectonic shift has been building for some time, driven on the one hand by the forces of Fabianism and cultural Marxism, on the other by the Conservatives’ surrender of their core philosophies in favour of ‘pragmatism’ (i.e. drifting leftward to shake off the ‘nasty’ tag, which of course they’ll never lose because the people who dictate the terms are their even more left-wing opponents).

For a forensic analysis of what has gone wrong, I recommend this must-read essay by David Eyles at Country Squire titled Post-Brexit Tory Doom:

The result of the Conservatives having abandoned conservatism is the unintentional creation of a philosophical void. It has meant that the Conservatives, upon taking office, have found themselves unable to forge political direction for the country. Indeed, David Cameron almost prided himself upon this by describing himself as ‘pragmatic’ – in other words he blew with whatever wind direction was prevailing at the time. Into this void has stepped the Civil Service, which instead of being politically neutral as it always used to be, is now heavily politicised towards the Left. In addition, the rest of the élites which oversee so much of our public life have ensured that the Westminster Conservative Party have been softened up socially and culturally over dinner party tables. The Civil Service has thus successfully guided the Conservative government into territory that is now firmly occupied by the Leftist Clerisy.

This has not gone unnoticed by the people who might once have considered themselves “natural Tories”.

They look at Sir Oliver Wetwin, Nicholas Boles, Sarah Wollaston, Anna Soubry, Dominic Grieve, Theresa May, Philip Hammond, and all the other wets who have helped sabotage Brexit and they say to themselves, not unreasonably: “Why should I vote for this shower?”

At the Brexit Betrayal Rally I met lots of people who are so cross that they have vowed never to vote Conservative again. Social media too, you will have noticed, is awash with pictures of people severing their Conservative party membership cards. And when I visited the House of Commons last week to test the mood, I spoke to several Conservative MPs who reported getting terrible feedback from their constituencies. One told me: “In the next local elections we’re going to get wiped out.”

I understand people’s frustration. But they ought to be aware that if true Conservative Brexiteers cut up their membership cards at this time, they will only be hastening their party’s decline into oblivion. It will mean decisions about the party’s future will be left to the kind of people who think Nick Boles is a good thing and that the Conservatives need to drift more to the left to win over young, Remain-supporting metropolitan voters. So the Conservative party will become even less conservative and less worth voting for, sending it into a death spiral from which it may be impossible for it to recover.

It’s obvious what the Conservative government needs to do to avoid self-destruction: it needs first to push for the No Deal Brexit which 72 percent of the party membership want and which will be best for Britain generally; it needs to get rid of Theresa May and replace her with a solid Brexiteer; it needs to regain a sense of its core ideology and fight for the kind of values which Margaret Thatcher represented.

This is the only way it will ever persuade its natural constituency to vote for it.

But is this likely to happen? Not on its current trajectory, I’d say.

In normal times, there’s not a snowball’s chance in Hell that a terrorist-supporting, anti-Semitic, hard-left loon like Jeremy Corbyn would ever get voted into power by the generally sensible British electorate.

But these are not normal times. Various clever rich people have already made sure to move their assets offshore in preparation for the massive confiscatory spree and capital controls which will instantly follow the election of Corbyn’s socialist regime.

I used to think they were just being paranoid. Now I’m starting to worry they may have been prescient.

See James Delingpole talking to Brendan O’Neill at the Podcast Live festival in London tomorrow (Sunday) at 11.30am. For tickets and details go to https://www.podcastlive.com/event/politics-london/

AP ‘Fact Check': It's Not ‘Grooming' to Sexualize Young Kids Away from Parents