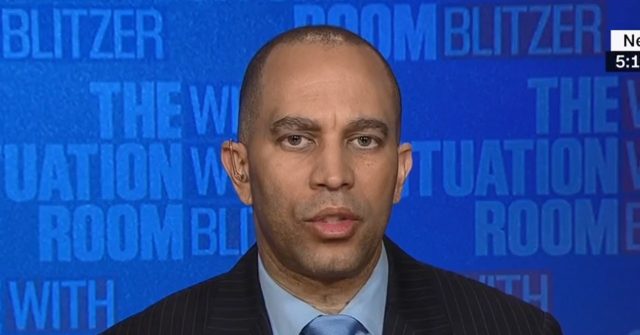 Friday on CNN’s “The Situation Room,” Rep. Hakeem Jeffries (D-NY), a consistent critic of President Donald Trump, doubled down on his attacks on the president.

Jeffries told network host Wolf Blitzer that Trump was peddling “xenophobia” with regards to his immigration policy, which he said was part of a political strategy.

“Well, the president, unfortunately, continues to peddle xenophobia as part of a well-calculated political strategy, apparently to get elected,” Jeffries said. “It’s clear that we have a broken immigration system. It’s clear that we need comprehensive immigration reform. But we should do it in a bipartisan way. In a responsible fashion, Democrats and Republicans, coming together to fix our broken system, consistent with the notion that we are a nation of immigrants — a gorgeous mosaic of people from across the world.”

“That’s what makes America a great country,” he continued. “We are also a country anchored in the premise of the rule of law. And we can do this together without the irresponsible rhetoric and conduct and behavior that far too often comes out of 1600 Pennsylvania Avenue if the president would only get out of the way.”

Associated Press: ‘Liz Cheney of Wyoming Is Bracing for Defeat’