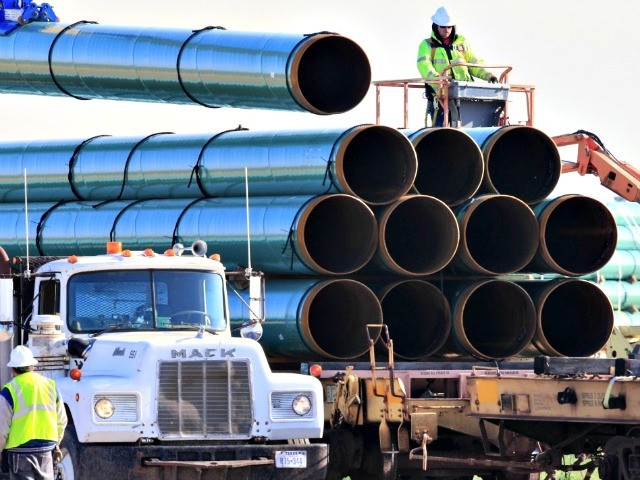 President Donald Trump is expected to sign an executive order next week in response to environmental activists’ ongoing legal efforts to stymie his administration’s efforts to reduce regulations and ramp up pipeline construction to allow Americans access to the abundant domestic supply of natural gas.

“The effort is spurred by the blockage of the construction of the 125-mile Constitution Pipeline from Pennsylvania to New York,” CNBC reported. “Officials say the administration’s broader goal is to lower energy prices by accelerating the transport of natural gas and to reaffirm U.S. energy ‘dominance,’ a word that appeared multiple times in an early draft of the order.”

A scholar and fellow with the American Enterprise Institute, Mark Perry, put it this way in a Boston Herald op-ed in 2018:

Although America is a global energy superpower and the United States has been the world’s top producer of natural gas since 2009, New England relies on imported LNG from faraway countries for about 20 percent of its natural gas. And as for propane, another heating fuel, New England would have been left in the cold had it not been for recent tanker shipments from overseas.

This is what happens when you don’t build your own natural gas pipelines, which are the safest and most economical way to transport energy. The trouble is there isn’t enough pipeline capacity to bring in natural gas from the Marcellus shale in Pennsylvania to New England in times of high demand. Even as America’s natural gas production has soared, the pipeline capacity to get it to where it’s needed hasn’t kept up. The problem: political obstacles driven by environmental groups.

In the past two years, regulatory obstacles have led to the cancellation of two pipeline projects, which is ominous for a region that desperately needs more natural gas to make up for the shutdown of nuclear and coal plants. Moreover, there are those in the region who promote themselves as climate leaders but continually block new gas pipeline capacity.

According to CNBC, the order will give guidance to the Department of Energy and the Environmental Protection Agency (EPA) to address a portion of the Clean Water Act, which gives states authority over projects that involve water quality:

A protracted legal battle over the project has been underway since the Federal Energy Regulatory Commission, or FERC gave a green light in 2014 and 2016 because the state of New York has refused to issue a water permit.

Backlash from states and governors is expected, especially in New York, where regulators warned of further legal action if FERC throws out its water safety review in the Constitution case.

“We don’t think this manifestly changes the state of play,” Christine Tezak, an energy analyst with ClearView, said in the CNBC report. “An executive order can’t change the statutory discretion of a state to approve, deny or waive, so a state could still say no.”

“The executive order is currently slated to be signed on Wednesday, with Texas as one suggested location for the event,” CNBC reported. “Administration officials caution the plans could change.”