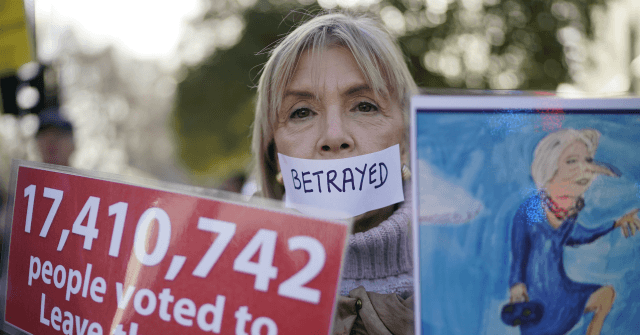 According to a Sky Data poll released Friday, 43 per cent of people would be angry if Britain took part in European Parliament elections as a result of Prime Minister Theresa May forcing a long extension of Article 50.

Just 28 per cent of people said they would be pleased while 23 per cent they “don’t mind” the country taking part in the EU elections.

Of the 1,295 Sky customers interviewed on April 5th, more than a quarter (26 per cent) said they would boycott the vote entirely.

When asked what was respondents’ preferred way to resolve the Brexit deadlock, No Deal Brexit came out with a relative majority of 41 per cent.

The option of accepting a long Brexit delay and European Parliament elections came second, being preferred by 35 per cent, with just 16 per cent favouring Prime Minister May’s controversial Withdrawal Agreement.

The results of the poll came after Mrs May said she would seek a longer Brexit delay which could force the country into EU elections next month — almost three years since the UK voted to leave the bloc.

‘Fight Back’: Brexiteers Vow to Sabotage Brussels if Pulled into EU Elections https://t.co/A8CMj1LqaC

EU bureaucrats and European leaders are likely to be equally unhappy at the prospect of the British, preparing to leave the EU, having influence in Brussels decision-making.

That concern would have been increased considerably after key Brexiteers threatened to sabotage Brussels if forced to take part in European Parliament elections.

Conservative MP Jacob Rees-Mogg said that Britain “should be as difficult as possible” if it sends MEPs back to the continent, and could cause merry havoc with “integrationist schemes” by vetoing budget increases and obstructing advancement of the EU army.

Brexit Party leader Nigel Farage also warned that if the planned extension goes ahead, “this is the fight back and they’re going to be very surprised by what they get.” Pollak: I’m a Jew. Stop Calling Me an Antisemite.