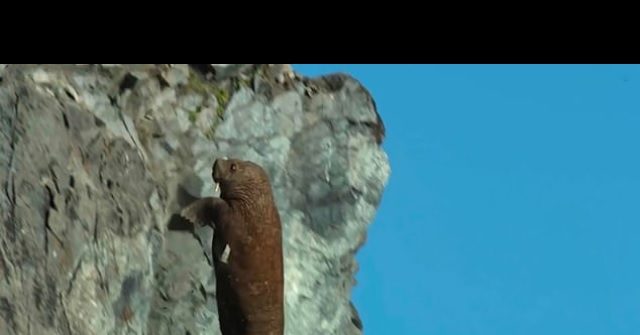 Walruses are dying by the hundreds by scaling cliffs and then diving to their deaths on the rocks below, according to the latest scare story from climate alarmists.

“Shocking Our Planet footage shows how climate change is causing walruses to plunge to their deaths off cliffs ‘they should never have scaled,’ as retreating sea ice pushes them further onto shore,” the Daily Mail proclaimed Saturday.

As attentive Breitbart News readers know, “climate change” has become the bogeyman responsible for countless ills, comprising everything from a slump in coffee production to catastrophic hurricanes to a drop in the population of Hawaiian monk seals to the decimation of migratory songbirds and even colder winters.

Anthropogenic climate change — the belief that human emissions of carbon dioxide into the atmosphere are driving global temperatures inexorably upwards — has become the scapegoat for problems ranging from the mass deaths of reindeer to the creation of “ghost forests” along the U.S. Atlantic seaboard to shrinking sizes of British chips.

But now the attention has shifted to walruses, who have been “confused by shrinking ice, compounded by poor eyesight,” which leads them to scale high cliffs and them jump to their deaths, convinced they are simply diving into the sea.

The impetus of the latest climate scare is a segment of Netflix’s Our Planet series, which highlighted “the gruesome fate of walruses forced increasingly onto shore as sea ice dwindles.”

Famed natural historian Sir David Attenborough narrates the series, which purports to show how walruses are dying in their hundreds, due to shrinking sea ice.

“A walrus’ eyesight out of water is poor,” Sir David attests.

“But they can sense the others down below. As they get hungry, they need to return to the sea. In their desperation to do so, hundreds fall from heights they should never have scaled,” he pronounces.

The Netflix series shows a “disturbing clip,” in which “walruses can be seen perched precariously on the edge of the rocky cliffs, unaware of just how high up they are. They then fall below, amid bodies and other living walruses.”

Why? Because capitalists in the West drive SUVs and use air conditioning, of course.

The loss of sea ice, a product of man-made global warming, may not drive walruses to extinction, the Daily Mail asserts, yet “scientists say it will have devastating impacts on their population.”