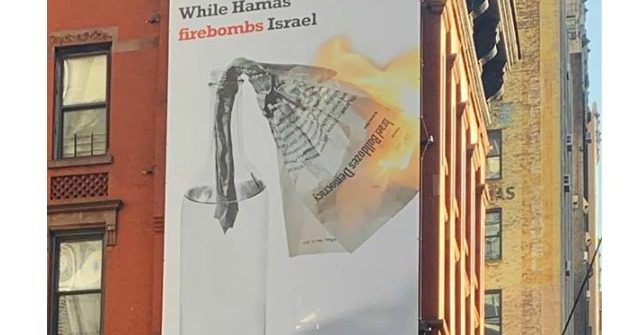 The billboard is of a Molotov cocktailwith wick lit with a Times article with a headline that reads: “Israel Bulldozes Democracy.”

Encompassing the Molotov cocktail is the phrase “While Hamas firebombs Israel … ‘The New York Times’ inflames with biased coverage,” which, according to JNS, is Hamas rioters’ weapon of choice.https://twitter.com/AdamMilstein/status/1113469103509893120

The Committee for Accuracy in Middle East Reporting in America (CAMERA), the organization behind the 35-foot billboard, said it possesses a dual symbolic meaning.

“One meaning is, obviously, to remind Times’ staff that Hamas is violent—violent against both Israel and its own people,” CAMERA executive director Andrea Levin told JNS. “The Times absolutely needs this reminder because far too often their reporters ignore Hamas’s violent theocracy in the Gaza Strip.”

“The headline is ludicrous,” Levin continued. “Has Hamas traded in its rockets for John Lennon’s anti-war music? Those so-called ‘peaceful’ Hamas protests include rocks, firebombs and explosives hurled at Israelis. Not to mention recent rocket fire into the Tel Aviv area.”

“We will be closer to peace when journalists hold both sides in the Israeli-Hamas conflict to the same moral standard,” she argued. “When The New York Times runs interference for Hamas, holding them to a lower moral standard, the paper only abets and inflames their violence. That might well sell some papers, but the Times would, I believe, sell even more papers telling the truth.”

She added: “Our main hope, though, is that Times staff will see it and do some soul-searching about their bigotry of low expectations in not holding Palestinian rulers to the same standard as they do the Jewish state.”

CAMERA said roughly 100,000 passerbyers see the billboard each day and will remain for at least the next six months.