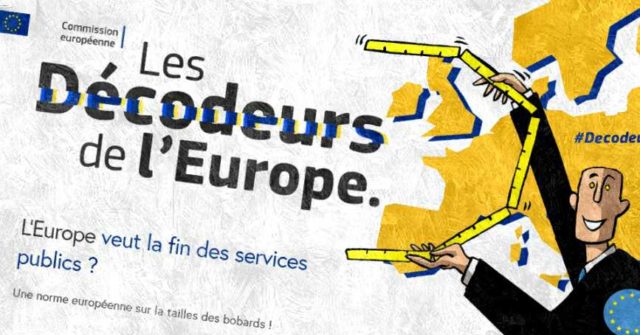 The EU has set up its own “fact checking” service in order to combat the spread of so-called “fake news” ahead of May’s European elections.

The new ‘Decoders of Europe’ site, based on the Boulevard St Germain in Paris, seeks to “answer a series of questions or accusations, explaining what constitutes the reality and sometimes the complexity of European policies. Beyond these explanations, our goal is also to better inform, on the eve of the 60th anniversary of the Treaty of Rome, what works in Europe!” according to the EU website.

The site was launched by Isabelle Jegouzo, head of Representation of the European Commission in France. She said “Without getting involved in politics, we want to inform citizens, restore the balance between factual and misinformation ”

Most of the “independent fact-checkers” operating at present tend towards a strong left-liberal bias, however, with well-known services such as Snopes rating debunked anti-conservative memes as “true”, and a clearly satirical article about left-liberal news network CNN purchasing a washing machine to “spin the news” as “false”, as if it had been a genuine news report.

PolitiFact, another well-known “fact-checker”, rated accurate claims by U.S. President Donald Trump about Russia’s nuclear arsenal as only “half-true”, on the subjective grounds that he was “missing the big picture”, and claims that Democrat presidential candidate Hilary Clinton had called for open borders as “mostly false”, despite her clearly stating that “My dream is a hemispheric common market, with open trade and open borders.”

How impartial an EU “fact-checking” service centred on the activities of the EU could ever hope to be seems open to doubt, considering how often the at least nominally independent ones cited above would appear to fall short.

According to a report by French newspaper Le Parisien, the “Decoders of Europe” are hoping to end false rumours and reports about the EU by what they describe, in rather loaded terms, as “europhobics”.

The move to establish the website follows actions the EU has already taken to combat supposed “fake news” as part of a broad strategy. According to questions posed to the commission, the EU has a four-point plan, which they described as:

In December 2018 the EU discussed the possibility of such a site, declaring that “measures to tackle disinformation online, including a self-regulatory EU-wide Code of Practice on Disinformation, signed by large online platforms and the advertising industry, as well as support for an independent network of fact-checkers” should be introduced.

The website appears to be a reaction to the rise of eurosceptic and populist parties ahead of the EU parliamentary elections in May. Reports last week indicate that a third of seats in the elections may be won by populist parties from across Europe, with Italy’s League party (Lega) under Matteo Salvini set to be the biggest winner. Exclusive–Donald Trump Jr: What Did the Democrats Know and When Did They Know It?