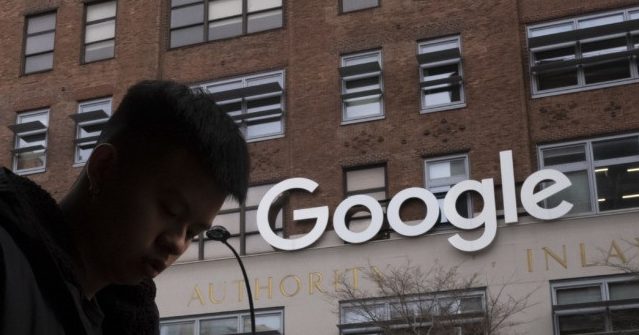 Peter Schweizer, president of the Government Accountability Institute and senior editor-at-large at Breitbart News, explained how Google procures compliance from ostensibly conservative figures via “donations,” “consulting deals,” and “certain arrangements” in order to present a facade of ideological balance in sources of support for its operations. He joined Friday’s edition of SiriusXM’s Breitbart News Daily with host Alex Marlow.

Last Thursday, Google squashed a tentative artificial intelligence ethics advisory panel as a result of internal left-wing agitation from within the company against the panel’s membership, specifically the inclusion of Heritage Foundation President Kay Coles James.

“It’s is an extreme woke left-wing culture,” said Marlow of Google. “And they still control so much of what we read and how we think.”

Schweizer concurred, “That’s the key point. Who cares what this company does? Except for the fact that they have so much power to sift and sort and to determine what people — particularly younger people — look at and what they are going to form of their ideas on a certain issue, because Google is suppressing certain stories [and] they’re pushing other stories.”

Google’s decision to terminate the aforementioned ethics panel reflects the fragility of the company’s philosophical positions under scrutiny, assessed Schweizer.

“Here’s the larger perspective on this, and I think to us it has to be a little bit encouraging, and that may sound very strange, but this is just further evidence to me of how weak these institutions are,” said Schweizer. “In other words, if they’re going to put together a panel of eight people to talk about a subject, and they can’t tolerate having just one person with a potentially different view on that subject, to me it speaks to the weakness and lack of confidence that these people actually have with their ideas.”

Google lacks confidence in its ability to defend its views and beliefs on the battleground of ideas, added Schweizer.

“In other words, what they’re signaling to us is, ‘We actually can’t even have a seven-on-one conversation, because deep down, we know we might be vulnerable on it,” determined Schweizer. “That may be sort of what the internal motive is: the lack of confidence.”

Schweizer explained Google’s appropriation of ostensibly conservative persons and institutions in pursuit of acquiescence from its potential critics.

“Google is a master at using its power and abusing its power to bully smaller competitors and to go after people because of their ideological views,” noted Schweizer. “They have got to be called out not just by us and other people who are aware of this. We need to start having people in industry and people in the private sector who care about these things to speak out about it. Some people are scared, but I have to give credit to some of the people in media. You look at a guy like Rupert Murdoch at Fox, he’s been critical of Google for years for these practices.”

Schweizer continued, “What we maybe need is an alliance of individuals who, for varying and different reasons, are critical of Google to come together, because otherwise, what Google is going to do — they’ve become very good at it — is they’re going to peel off certain individuals. They’ll peel off certain conservatives. They’ll people off certain people in the high-tech sector by offering them consulting deals, or by donations and certain arrangements That’s what they’re trying to do.”

Schweizer warned of the public’s possible future acclimation to and acceptance of Google’s political censorship as a fait accompli.

“I think the longer this drags on without a united front of individuals saying that his behavior is unacceptable [and] contrary to what Google claims — this is false advertising on Google’s behalf, they’re not what they claim they are — the longer this goes on, time is on the side of Google,” cautioned Schweizer.

Schweizer went on, “Because it becomes kind of the normal that people expect. ‘Yeah, of course Google censors and sifts stuff. Yeah, they’ve been doing it for years, so what?’ and that, to me, is the most dangerous position to be in, where people accept this behavior.”

The blend of arrogance and power among technology company executives is dangerous, alerted Schweizer.

“Thomas Sowell has written several books on the theme [of intellectuals], [asking] why is it that people who are very smart in  a certain areas — let’s say they’re incredible medical doctors — believe that their brilliance as a medical doctors transcends into them being military strategists or economists?” asked Schweizer. “That’s what you’re seeing a lot of in the case of Google.”

Schweizer continued, “They’ve got a lot of smart people over there in terms of the technology space that know how to build these powerful machines, but their arrogance, in a way, leads them to think that they have got everything else figured out. That is a very, very dangerous place for people that have a lot of power to be.”

Schweizer remarked, “I think one of the things that we have to do is sort of knock Google off this pedestal. Just because you’ve built this great machine doesn’t mean you know how to run a society, doesn’t mean you know how best to express freedom of speech. it does not mean that you know best how to organize an economy. That needs to be directed at them on a regular basis. They’re not used to having those sorts of conversations.”

Silicon Valley, stated Schweizer, is a politically and philosophically homogeneous and myopic area.

“I’ve lived in Palo Alto, California, when I was with the Hoover Institution,” recalled Schweizer. “It’s a wonderful, beautiful place, and they will tell you that it’s this very exotic [and] open place where there are all these fertile ideas. It’s not. It’s actually a very, very closed place. It’s one engineer talking to another engineer to another engineer, all of whom have poorly formed views on some of these important issues, and yet, because they have become wealthy in working for these companies and creating these products, they now feel as if they’ve got things figured out on the other fronts. I think Americans are waking up to that.”

Schweizer added, “I think there are natural allies that are connected with other companies or other institutions. But the point is, we can’t accept it. That’s my biggest concern, that people have kind of accepted it. They continue to believe that Google is okay, and it becomes the new normal. This is the new marketplace of ideas where a lot of people get the information that matters to them.”

Schweizer said, “The marketplace is tilted against conservatives, and I think that debate is over. The reporting that Breitbart has done on this, the work of Dr. Robert Epstein, other research has been done, the debate is over. Google is tilting the scales, is tipping the scales. They are censoring. They are manipulating.”

“The question is now, what are we going to do about it?” asked Schweizer.

Swalwell: ‘We’re on That Road’ to Impeaching Trump