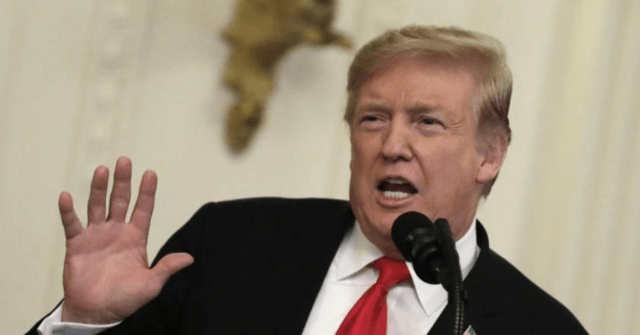 TEL AVIV – President Donald Trump told a Jewish audience Saturday that both Prime Minister Benjamin Netanyahu and his main election challenger, Benny Gantz, are “good people” who would be running neck and neck on April 9.

“How is the race going? Who’s going to win the race?” he asked during a keynote address at the Republican Jewish Coalition conference in Las Vegas.

A shout of “Bibi!” came back from the audience, in reference to the incumbent premier. Trump responded, “I think it’s going to be close. Two good people.”

The start of his speech was interrupted by hecklers who chanted, “Jews are here to stay! Occupation is a plague!”

The crowd then countered with chants of “USA!” and for his part, Trump quipped: “He’s going back to Mommy; he will be reprimanded.”

Trump thanked his Special Envoy to the Middle East Jason Greenblatt and his senior adviser and son-in-law Jared Kushner for their work on the as-yet unveiled peace plan, saying, “Peace in the Middle East: If they can’t do it, nobody can.”

In reference to his administration’s decision to nix the Iran nuclear deal, Trump said, “We’ve now imposed the toughest-ever sanctions on the Iranian dictatorship, and it is not the same country.”

“Today, folks, they have riots in the streets. They have very little money coming in. A lot of things have changed.”

Trump also thanked freshman Congresswoman Ilhan Omar, but followed it quickly by joking, “I forgot that she doesn’t like Israel.”

Trump also addressed the relationship between Israel and the U.S. during the Obama administration: “Three years ago, US-Israel relations were probably in the lowest point. How the hell did you support president Obama? Now, three years later I am standing before you here as the president to report a very different situation. The incredible bond between the US and Israel has never been stronger than it is right now.”

Regarding his decision to recognize Jerusalem as Israel’s capital, he said, “We got you something that you wanted,” and added that he had ignored calls from “presidents, prime ministers, dictators, kings, queens, everybody” who tried to convince him not to go ahead with the announcement.

“Israel security — really so important to talk about security — it’s always number one for me. They’d been trying to get that approved. As you know, for 52 years they wanted recognition from the United States on the Golan Heights,” he said.

He added that there was no prolonged outcry from the international community: “It was a big, big story for two days. Everyone’s happy. No repercussions. No. And there won’t be. I went there to protect Israel. We did the right thing. We did the right thing, and I want to congratulate Jared and Jason Greenblatt and [US Ambassador] David Friedman and all of the people they work with.”

He also gave a shout-out to billionaire mogul and Republican donor Sheldon Adelson and his wife Miriam, who were sitting in the audience, saying, “They love Israel.”