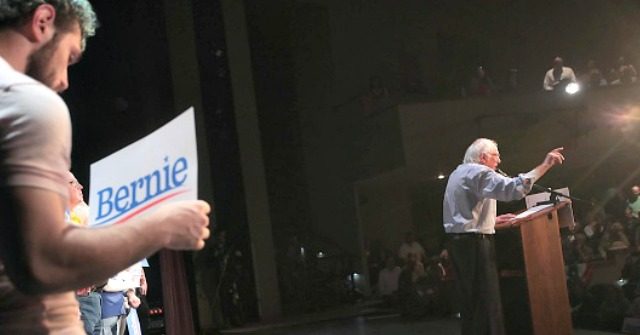 Presidential hopeful and Sen. Bernie Sanders (I-VT) said at a town hall in Oskaloosa, Iowa, over the weekend that the United States cannot have open borders.

Sanders made the remarks after someone attending the town hall described him as an “open borders advocate.”
“I’m afraid you may be getting your information wrong,” Sanders said. “That’s not my view,”

“What we need is comprehensive immigration reform,” Sanders said. “If you open the borders, my God, there’s a lot of poverty in this world, and you’re going to have people from all over the world.”

“And I don’t think that’s something that we can do at this point,” said Sanders, who does support free college tuition and universal health care.

There is no information about Sanders’ position on immigration on his berniesanders.com website, but the feelthebern.org website supporting the candidate said:

Bernie Sanders has said that we are a “nation of immigrants. That is, in fact, the strength of America.” Given this view, he believes the United States must create an immigration system that invites greater innovation, diversity, and economic opportunity for both American-born citizens and the people who want to make this land their home. Bernie supports immigration reform that will address the legal status of the 11 million undocumented people in our country, protect American jobs by way of visa reform, secure the border, and protect undocumented workers from labor exploitation.

The website states that Sanders supports a pathway to citizenship for all people who are in the United States illegally, the Dream Act, “Visa reform” and border security “without building a fence.”

Sanders also voted for the “Gang of Eight” immigration bill in 2013 that would have given amnesty to all of the people in the United States illegally.