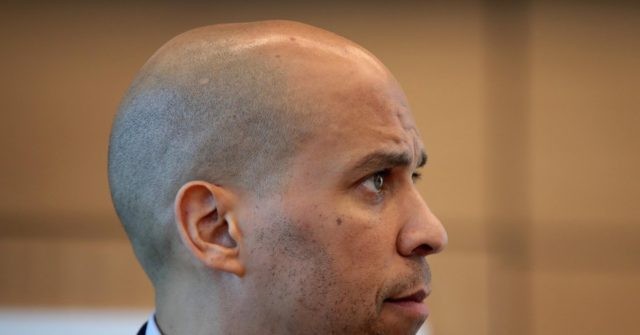 Senator and 2020 Democrat presidential candidate Cory Booker (NJ) announced Monday he plans to introduce legislation that would form a commission to study reparations for black Americans.

“This bill is a way of addressing head-on the persistence of racism, white supremacy, and implicit racial bias in our country,” a statement via Booker reads. “It will bring together the best minds to study the issue and propose solutions that will finally begin to right the economic scales of past harms and make sure we are a country where all dignity and humanity is affirmed.”

According to The Hill, a Booker spokesperson said the bill would create a commission aimed at analyzing the “impact of slavery and continuing discrimination against African-Americans.” The body would be tasked with providing recommendations for those who are descendants of slaves. The New Jersey Democrat will unveil the bill’s text “shortly,” the lawmaker’s office said.

“I am pleased that Senator Booker has introduced a Senate Companion to H.R. 40. I salute his dedication to elevating the discussion of reparations and reparatory justice, and look forward to the dialogue that this issue engenders on and off Capitol Hill,” Rep. Sheila Jackson Lee (D-TX), who introduced similar legislation in the House, said Monday.

Later, in an interview with Equal Justice Initiative executive director Brian Stevenson, O’Rourke said he believes the word “repair” is foundational to reparations.  “Until all Americans understand that civil rights” also involves “the injustices that have been visited and continue to be visited on people, we will never get the change that we need to live up to the promise of this country. So absolutely I would sign that into law,” said the Texas Democrat.

Former HUD Secretary Julian Castro, who is the most supportive candidate of reparations, said Wednesday that he believes the United States “will never truly heal until we address the original sin of slavery.”

Sens. Kamala Harris (D-CA) and Elizabeth Warren (D-MA) also told Sharpton that they back the measure if elected president.

However, not all high-profile Democrats agree on how to address the issue of reparations.

In a recent sit-down with the Post and Courier, House Majority Whip James Clyburn (D-SC), the highest-ranking African-American member of Congress, dismissed the proposal, saying “pure” reparations are “impossible to implement.”

Clyburn, largely seen as a 2020 kingmaker of sorts in South Carolina, has long advocated for the “10-20-30” policy to solve poverty in different parts of the country. The policy would direct ten percent of federal funds to counties containing at least 20 percent living below the poverty line in the last 30 years. Sen. Bernie Sanders (I-VT), another 2020 presidential contender, has endorsed the South Carolina Democrat’s proposal.