Delingpole: Theresa May 'Explains' Her Failed Brexit – 'Big Boys Stopped Me Then Ran Away' 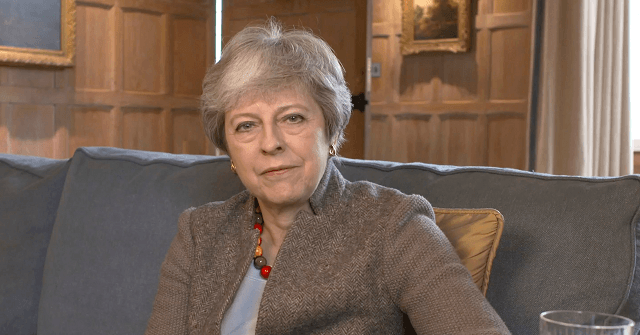 Lyin’ Theresa May has released an explainer video titled ‘Let me explain what’s happening with Brexit’.

If you’re going to watch it, make sure you do so with the sound turned off. That way you can best appreciate the hamminess of her over-acting. It’s like watching a prototype replicant – not one of the later, improved, Bladerunner variety – being painstakingly coached by someone sitting just off camera on how to look and behave like a human.

“Smile Theresa. No, no, try again: SMILE. Try to imagine you’re in a happy place. Imagine you’ve finally succeeded in sabotaging Brexit, just like you wanted to all along. Imagine Britain is stranded in the Customs Union for all eternity, bound by the EU’s trading rules, unable to make deals of its own. How good does that make you feel? Yes, Theresa. Like that! Now you’re getting there…”

I’m afraid I couldn’t actually bear to listen to what she was actually saying. Why would you want to hear a serial liar lying some more?

But I gather from those who’ve seen it that Theresa attempts to claim that she’s really keen to deliver Brexit but that big boys stopped her and then ran away.

Unfortunately, the base doesn’t appear to be altogether persuaded by this compelling explanation…

I didn’t become a Tory member for my party to work with the opposition on breaking its manifesto and promises. I became a member because I wanted it to deliver on a manifesto which you are breaking. Never has staying in that party been more difficult. Ever.