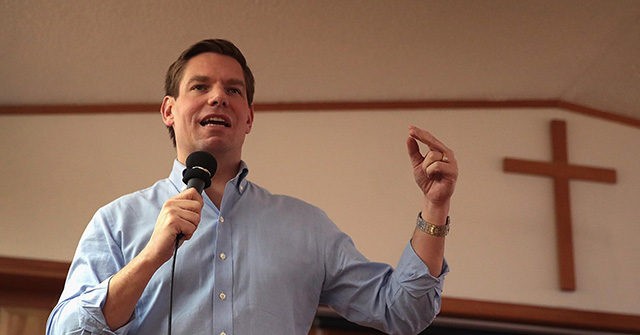 Rep. Eric Swalwell (D- CA), one of the most vocal proponents of the now-debunked Trump-Russia collusion conspiracy, revealed on The Late Show with Stephen Colbert Monday that he is running for president in 2020.

TONIGHT: California Representative @EricSwalwell announces on @colbertlateshow that he is running for President! #LSSC pic.twitter.com/bvzBPIkSnz

STEPHEN COLBERT: You’ve been very critical of Donald Trump, as you have been tonight. In the past you’ve called him a wrecking ball, you called him a Russian agent. You’re a congressman. What can you do to try to fix what you see as wrong with this country?

REP. ERIC SWALWELL: I’ve already done a lot, but I can do more. I’ve been in Congress for six years, I’ve defended our country from the [House] Intelligence Committee, while democracy’s been on the ropes. I took a group of young members of Congress. We started a group called Future Forum. We’ve gone all over the country to listen to and stand up for the next generation of Americans. And I see a country in quicksand, unable to solve problems and threats from abroad, unable to make life better here at home. Nothing gets done.

I talk to teachers, and truckers, and nurses, and they feel like they’re just running in place. It’s not adding up to anything. I talk to people who are just like me, who are the first in their family to go to college. They have a lot of student debt, get buy a home, can’t start a business. I talk to kids, who sit in their classroom afraid that they’ll be the next victim of gun violence and they see Washington doing nothing about it after the moments of silence and they see lawmakers who love their guns more than they love their kids. And none of that is going to change until we get a leader who is willing to go big on the issues we take on, be bold in the solutions we offer and do go in the way that we govern. I’m ready to solve these problems. I’m running for President of the United States.

Swalwell stumbled onto the national stage last November with a social media post implying that the U.S. government could attack gun owners who resist firearm confiscation by deploying nuclear weapons. The California congressmen, after being inundated with criticism and mockery, walked back the threat and claimed he was being “sarcastic.”

Poll: Majority Say Joe Biden Has Not Accomplished Much During Presidency