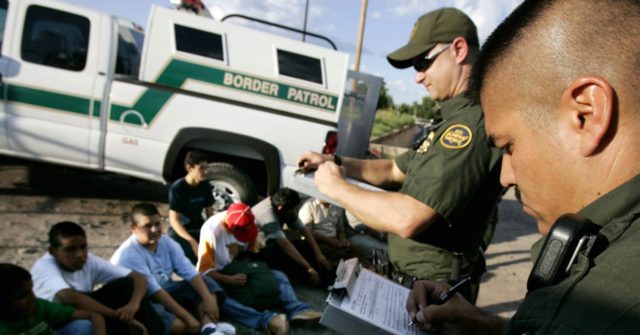 Former Kansas Secretary of State Kris Kobach said Monday the border crisis is getting worse despite President Donald Trump’s efforts to change it.

“It is an amazing crisis we’re in, one border patrol agent told me that they feel like they’re Uber drivers for illegal aliens, they don’t have time to enforce the law right now,” he said.

Kobach spoke about the crisis in an interview with Breitbart News Editor in Chief Alex Marlow in an interview on Sirius/XM Patriot on Monday, reacting to the news that Department of Homeland Security Secretary Kirstjen Nielsen had resigned on Sunday.

“The situation is horrible at the border right now,” Kobach said, pointing to the tens of thousands of migrants and illegal immigrants streaming across the border in caravans and large groups.”They walk in, in broad daylight and they announce themselves to the border patrol and then they falsely claim asylum,” he said.

Kobach recommended that the United States publish the final rule for the Flores settlement, superseding the court ruling that took place in the Clinton administration to keep detained families together.

“It essentially defines the terms where we can keep whole families together, which is what we want, so that the children are not exploited as a get out of jail free card,” he said, criticizing the Department of Homeland Security for “dragging their feet” on the issue.

He also recommended that the DHS redeploy existing FEMA trailers to help process more migrants and illegal immigrants at the border and suggested that the United State Treasury put more pressure on Mexico by ending remittances from people in the country who were in the country illegally. WATCH: Tiger Woods Tripped up by Long Leg of the Law