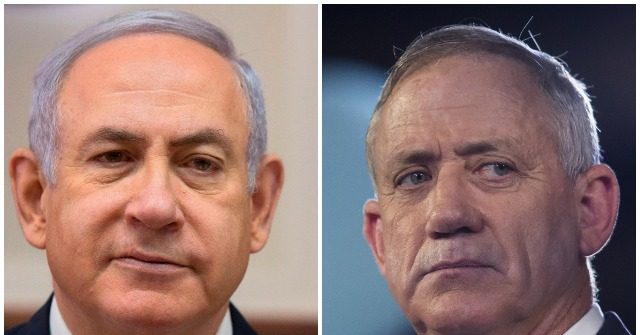 TEL AVIV – Prime Minister Benjamin Netanyahu on Sunday called an emergency meeting to warn Likud party leaders that a right-wing government was at real risk of being toppled in favor of a left-wing and Arab-centric coalition put together by main rival party Blue and White following Tuesday’s elections.

According to Netanyahu, Likud is not running first in the polls and therefore might not be tasked with forming the next government.

“It’s not spin, it’s real. We have to narrow the gap, and I tell you that if it does not happen, Yair Lapid will be prime minister,” he told Likud leaders, referring to the number two on the Blue and White party list who would rotate the premiership with its number one, former IDF chief Benny Gantz, should the party win.

“We do not have 61 recommendations — the biggest party is what matters,” he said, according to a translation of his remarks by the Times of Israel.

He further charged the media with trying to “put Likud voters to sleep.”

A 61-seat majority is needed to form a coalition in Israel’s 120-seat Knesset.

After Tuesday’s election, President Reuven Rivlin will meet with party leaders and decide which party is best positioned to head the government.

In an interview Monday morning with Channel 12, Netanyahu claimed he did not have enough recommendations from other party leaders for Rivlin to ask him to form a government.

“I do not have 61 recommendations and Gantz also leads in recent polls. In this situation they will be put on track toward a government and then they will go to Labor and Meretz and we will have a leftist government,” he said.

According to Netanyahu, if a party leader does not receive enough recommendations, Rivlin would likely ask whoever leads the party that wins the most seats to form a government.

In the Channel 12 interview, the incumbent prime minister also pushed back against Gantz’s claims that his vow to annex the West Bank was nothing more than an empty campaign promise.

Netanyahu over the weekend historically declared that he fully intends to extend Israeli sovereignty over the West Bank. The incumbent prime minister also said he had told President Donald Trump that would not evacuate “a single person” from the 400,000 or so Jews residing in the West Bank.

Gantz on Sunday said Netanyahu’s statement was “meaningless” and no more than a last-minute bid for Likud to gain the upper hand over Gantz’s Blue and White party.

Netanyahu, however, countered that such radical moves do not happen overnight.

“Why did it take two years to get recognition of the Golan Heights even with such a friendly president? These things takes time,” said Netanyahu in reference to Trump’s presidential order last month recognizing Israeli sovereignty over the Golan Heights.

Netanyahu said annexation of the West Bank would happen in three stages and he hoped to do it with “full American support.”

“I discussed [annexation] with representatives of President Trump and I expressed my belief that there is no other option, I think it is also the right move.”

“It is going to happen. This isn’t something I invented for the elections,” he said.