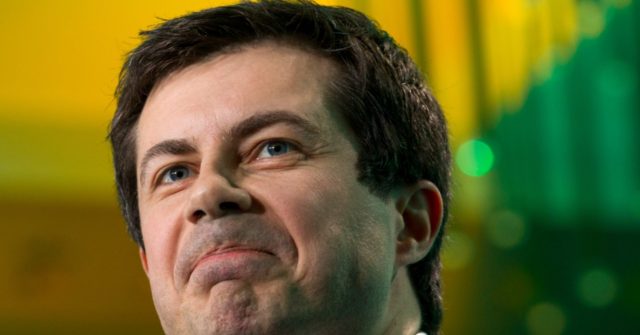 Pete Buttigieg, one of 642 far-left Democrats currently running for president, has exposed himself as a crazed, Christian theocrat who falls for fake news.

Buttigieg, the current mayor of South Bend, Indiana, is the corporate media’s latest Golden Child. This means he’s currently enjoying a coordinated love affair where the media try to sell him as Our Savior, as The Next Big Thing, as someone Super-Duper Special Who Must Be President.

Of course, the media only launch these narratives for Democrats, most especially Democrats who hit an identity politics’ sweet spot. Buttigieg might be a white male, but he’s also gay and gay-married to a man, which can only mean one thing: He’s the next Abraham Lincoln, the next Greatest President Evah. So you’ve seen the drill: no tough questions, tee up the candidates’ talking points like Jimmy Fallon tees up whatever his latest celebrity guest is promoting…

Unfortunately, none of this media gushing comes close to reflecting the reality of Buttigieg, who  has already proven himself to be an intolerant theocrat and a straight-up moron who falls for recycled fake news.

As you might have heard over the weekend, a number of America’s geniuses — Judd Apatow, John Cusack, Ana Navarro, Jamelle Bouie — melted down over a piece of recycled fake news that was debunked nearly a year ago.

In May of 2018, President Trump referred to MS-13 gang members as “animals.” Naturally, the establishment media used selectively-edited video to make it look as though Trump called all illegal migrants “animals.”

This selectively-edited video was revived again last week and guess who fell for it this time. Yep, Mayor Pete:

You do not refer to human beings as animals. You just don’t.

Worse, though, are Buttigieg’s theocratic impulses. He has said this of President Trump:

I’m reluctant to comment on another person’s faith, but I would say it is hard to look at this president’s actions and believe that they’re the actions of somebody who believes in God. I just don’t understand how you can be as worshipful of your own self as he is and be prepared to humble yourself before God. I’ve never seen him humble himself before anyone.

He has said this of Vice President Mike Pence:

My marriage to Chasten has made me a better man. And yes, Mr. Vice President, it has moved me closer to God. Speaking only for myself, I can tell you that if me being gay was a choice, it was a choice that was made far, far above my pay grade. And that’s the thing I wish the Mike Pences of the world would understand: If you’ve got a problem with who I am, your problem is not with me. Your quarrel, sir, is with my creator.

And he said this of Christian Trump voters:

It’s something that frustrates me because the hypocrisy is unbelievable. Here you have somebody that not only acts in a way that’s not consistent with anything I hear in scripture or church where it is about lifting up the least among us and taking care of strangers, which is another word for immigrants, and making sure that you are focusing your efforts on the poor. Also personally how you’re supposed to conduct yourself.

Each one of those comments represent a perfect example of a demagogic bully abusing his faith by turning it into a divisive weapon — you know, just like Jesus did.

On top of that, those comments prove Buttigieg knows nothing about Christianity; actually less than nothing, he’s a total ignoramus on the subject, and an ignoramus with a log in his eye the size of a Jupiter.

Normally, this is something I would never comment on — hey, live and let live, but I didn’t start this debate, he did, so let’s begin with the fact that Buttigieg is an openly gay man married to another man…

Here’s a thought: When you are living a life in open defiance to God, you might not want to attack the faith of others.

And his rational for this defiance might be the dumbest thing a presidential candidate has ever said about Christianity: “If you’ve got a problem with who I am, your problem is not with me. Your quarrel, sir, is with my creator.”

First off, he’s picking a fight with Mike Pence, a man who has been beyond tolerant of homosexuals. Secondly, Buttigieg is blaming God for his openly gay lifestyle, which is (remember, I didn’t start this debate) an act of outright blasphemy.

We are all burdened by a temptation to sin — gay, straight, whatever. Believe it or not, the biblical bar for sexuality is extremely high for everyone, for all of us. Homosexuals are not unique in this regard, which means they are not given a special pass to give in to that temptation. Defending your sin with a “God made me this way” argument is, at best, childish.

You see, God expects us to do our best to control temptation and when we fall short (and we all do) we are then expected to repent, to experience regret, to chastise ourselves to do better next time — not run around like spoiled brat yelling, “God made me this way! God puts all this temptation in my way!”

So here’s a guy lecturing others about Christianity when he doesn’t even understand the basics of the faith and when he supports the infanticide of abortion — which violates nothing less than the sixth commandment.

Listen, as a practicing Christian and Catholic, I’m quite comfortable with my support for Trump — a wildly imperfect human being,  just like myself.

Everyone keeps talking about how impressive Buttigieg is.

Really, because all I see is a judgmental hypocrite and demagogue stupid enough to believe everything he reads.

Oh, and an idiot who insults voters by attacking their religious beliefs…

Other than that he’s super impressive. Alex Marlow Interviews 'Woke, Inc.' Author Ramaswamy on the 'Woke-Industrial Complex,' What It Is, and How to Fight It