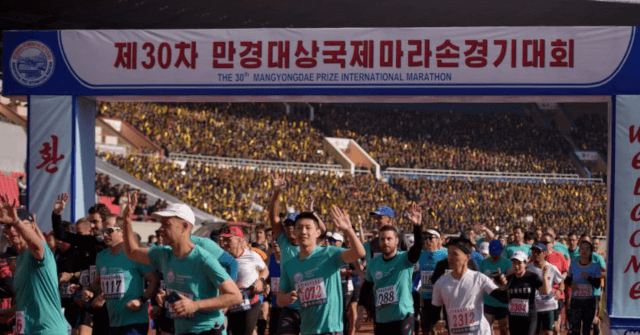 Nearly 1,000 Westerners attended Sunday’s Pyongyang Marathon – twice as many as last year – according to a tour company that specializes in North Korean travel.

According to the travel agency Koryo Tours, which specializes in bringing foreigners into North Korea, around 950 tourists attended the event on Sunday, compared with 450 in 2018. The event allows foreigners to compete in the marathon through the capital and forms part of the regime’s celebrations of the birthday of the late dictator Kim Il-Sung in April 1912.

This year’s participation was roughly at the same as levels in 2017, before tensions between the U.S. and the North Korean regime threatened to boil over amid continued nuclear proliferation and the imprisonment and ultimate death of college student Otto Warmbier. American citizens were later banned from visiting North Korea, a move that has yet to be lifted. Kim Jong-un also executed the nation’s latest nuclear weapons test in September of that year, ceasing the practice after that to instead engage in talks with South Korean and American officials.

The ongoing diplomatic talks between North Korea and the United States appear to have helped boost the country’s tourist industry, which provides a vital source of foreign currency for the Kim regime. Although there were no visitors from the U.S., travelers from other Western countries seem more comfortable visiting the rogue communist state, the tour groups bringing them into the country reportedly concluded.

Hundreds of foreigners race in the Pyongyang marathon https://t.co/QwitO9A8TX pic.twitter.com/k8aAF3y2MZ

“As political tensions have subsided, tourism demand has increased,” Elliott Davies, director at Uri Tours, told Voice of America. “You could plot a graph in this direct relationship.”

Australian Jasmine Barrett, who has competed in the marathon three times, told AFP she kept returning so she could “see the smiles on the children’s faces” as they cheered on the runners. “I’d definitely recommend it to others because it’s a great way to see the city and the people who live there,” she said.

The majority of tourists to North Korea come from China, for whom the rules are generally less restrictive due to the country’s geographical proximity and close diplomatic relations. Beijing recently helped the regime open a travel agency in Taiwan and has promoted it as a destination to tourists.

Although overall tourist numbers have fluctuated over recent years due to political instability, Kim reportedly harbors grandiose ambitions for a potential tourist industry, despite the risk that it might mean opening up his country to external influences.

President Donald Trump has previously endorsed the idea of developing a tourist industry without addressing the fact that profits from such ventures are unlikely to reach the ordinary North Korean citizen.

“You could have the best hotels in the world right there,” Trump said following his summit with Kim last year. “Think of it from a real estate perspective. You have South Korea, you have China, and they own the land in the middle. How bad is that, right? It’s great.”

White House Coronavirus Czar: Decision on Federal Mask Mandate Will Be Based on 'Evidence and Science'

Minister of Truth Nina Jankowicz Wants to Edit Your Tweets