Taiwan's President at Free Speech Event: 'China Wants to Use Our Democracy Against Us' 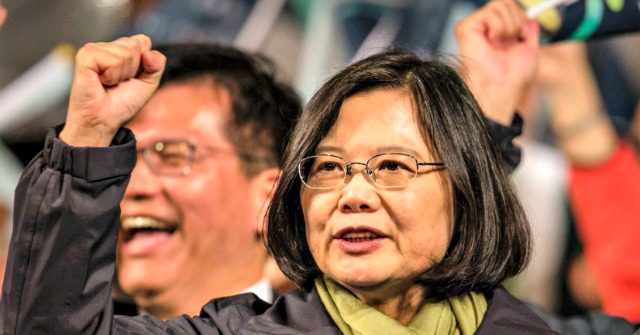 Taiwan’s President Tsai Ing-wen warned an audience at a speech commemorating the nation’s Freedom of Expression Day on Sunday that China is actively attempting to “use our democracy against us” through misinformation campaigns designed to curb the nation’s sovereignty.

Tsai’s remarks were part of an address specifically honoring Deng Nan-jung, a Taiwanese free speech activist and journalist also known as “Nylon Deng” who self-immolated in 1989. As the Taipei Times recalls:

Deng had been holed up in his office for 71 days in an effort to avoid arrest, after being charged with sedition in January 1989 for publishing a draft “Taiwan Republic Constitution” in his magazine, Freedom Era Weekly. The charge carried a maximum sentence of life imprisonment. Deng set himself alight on April 7, 1989, sacrificing his life to defend freedom of speech.

While many who support communism and China’s claims to Taiwan consider Deng a dangerous activist and “terrorist” despite not having used violence to advocate for free speech, many Taiwanese admire Deng for leading a movement that ultimately led to the modern state of freedom in Taiwan.

Tsai told the audience that her government was working to honor Deng in part by clearing the criminal records of thousands of Taiwanese who were taken as prisoners of conscience in the 1980s for opposition to the government at the time.

In her remarks, Tsai also vowed to fight to keep the Communist Party of China from undermining freedom in Taiwan.

“[China] wants to use our democracy against us. I simply cannot accept this, and I believe Taiwanese in general would not accept this,” she told the audience. “As president I will persevere in the fight for democracy.”

“We must allow free speech to be the shared DNA of Taiwanese. This will be the best way to remember Deng Nan-jung these 30 years later,” she added.

Tsai identified “fake news” generated by the Chinese communist regime as a threat to Taiwan, as it could adversely influence Taiwanese politics to generate a more pro-China atmosphere in the country.

“Fake news warfare from the outside poses challenges to Taiwan, just as Europe is challenged by terrorism,” she argued. “Fake news coming from outside Taiwan is harming freedom in the guise of freedom.”

Tsai insisted that “freedom of speech is being eroded” through “fake news” in the country propagated by “outside” groups. Focus Taiwan noted several local reports identifying China as the culprit behind reports against Tsai and her pro-sovereignty Democratic Progressive Party (DPP). The DPP suffered a significant electoral defeat in local elections in November, which many in Taiwan attributed in part to the Chinese government disseminating misinformation on DPP candidates and threatening the Taiwanese economy. China denied any election interference, but Communist Party media heartily celebrated the defeat.

“We are concerned that streaming media services that have close ties with Beijing could have cultural and political influences in Taiwan … and even affect Taiwan’s elections,” Chiu told Nikkei Asian Review.

April 7 is Taiwan’s Freedom of Speech Day. Tsai used the occasion to post a message on Twitter Sunday that echoed her speech that day, vowing to “continue to fight the good fight to secure our future.”

Today is #Taiwan’s Freedom of Speech Day. Yet even now, external forces are taking advantage of our freedom of speech to spread disinformation & erode our freedoms. As President, I won’t allow it & I will continue to fight the good fight to secure our future.#IslandOfResilience pic.twitter.com/wtvUjFeIcH

While the government of Chinese Communist Party leader Xi Jinping has denied using “fake news” to influence Taiwanese politics, Beijing has increasingly threatened Taiwan with military action since Tsai took office in 2016, taking over for the more China-friendly Ma Jing-yeou. Xi opened the new year with a speech in which he declared that Chinese officials “make no promise to abandon the use of force” in their pursuit of colonizing Taiwan.

“Reunification is a historical trend and it is the right path. Taiwan independence is an adverse current of history and is a dead end,” Xi asserted at the time.

China’s military leaders have followed Xi’s lead. “If anyone wants to separate Taiwan from China, the Chinese military will safeguard the national unity at all costs so as to protect China’s sovereignty and territorial integrity,”

Tsai has attempted to strengthen ties with the United States in light of both the increase in frequency of threats from China and Taiwan’s shared political values with America. Tsai – who triggered a minor controversy in 2016 when then President-elect Donald Trump accepted a telephone call from her congratulating him on his election win, which Chinese officials interpreted as Trump accepting her legitimacy as a fellow head of state – recently celebrated that Washington’s “commitment to Taiwan is stronger than ever.” Tsai made the remark this month at a Heritage Foundation event during a visit to Hawaii, which she noted was “at the center of the Indo-Pacific region” that is the focus of China’s attempts at colonization, primarily taking place in the South China Sea.