Utah Jazz' Kyle Korver on Race: White People Are 'Responsible' for the Sins of Their Forefathers 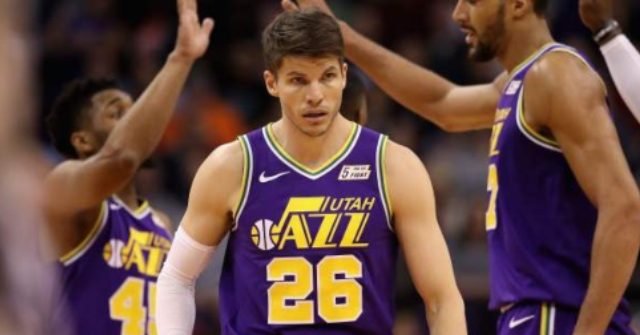 In a long op-ed at the Players’ Tribune, white Utah Jazz player Kyle Korver blamed white people for “inequality” and “racism” in America. Specifically, Korver insisted that white men today are “responsible” for all the racism of their ancestors.

In the April 8 editorial, Korver discussed several incidents that he claims are examples of racism in the NBA.

In one incident, he talks of his own “embarrassment” when he “sort of” blamed Thabo Sefolosha, a black player whom he knew, for being injured during an arrest in 2015.

The second incident occurred last month when Oklahoma City Thunder player Russell Westbrook got in a verbal tussle with a Jazz fan during a game. Westbrook claimed the fan yelled racial epithets at him.

“The incident struck a nerve with our team,” Korver claimed.

These incidents, Korver said, made him begin thinking about blame and responsibility and the upshot of his rumination is that he blames all white people. Indeed, he even blamed himself.

“How can I — as a white man, part of this systemic problem — become part of the solution when it comes to racism in my workplace? In my community? In this country?” Korver asked.

Despite the fact that he plays in a league where hundreds of black men have become multi-millionaires in a nation that twice elected a black man to the White House, Korver insisted that racism is “at the heart of nearly every major issue in our country today.”

I have to support leaders who see racial justice as fundamental — as something that’s at the heart of nearly every major issue in our country today. And I have to support policies that do the same.

I have to do my best to recognize when to get out of the way — in order to amplify the voices of marginalized groups that so often get lost.

Korver went on to blame all white men everywhere in the country for “racism,” even saying that white men are “responsible” for all acts of past racism.

Two concepts that I’ve been thinking about a lot lately are guilt and responsibility.

When it comes to racism in America, I think that guilt and responsibility tend to be seen as more or less the same thing. But I’m beginning to understand how there’s a real difference.

As white people, are we guilty for the sins of our forefathers? No, I don’t think so.

But are we responsible for them? Yes, I believe we are.

“And we all have to be accountable — period. Not just for our own actions, but also for the ways that our inaction can create a “safe” space for toxic behavior,” Korver added.

Korver has been praised for his op-ed blaming whites for racism. Nearly 9-in-10 Illegals Released into U.S. Not Showing Up to Court Dates