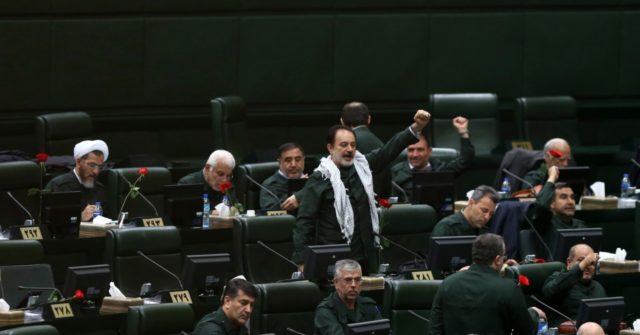 Iranian lawmakers opened a new session of the country’s Parliament on Tuesday with chants of “Death to America.” The taunt was meant as a response to the White House’s designation of Iran’s elite paramilitary Islamic Revolution Guard Corps (IRGC) a foreign terrorist organization.

Iran’s Supreme National Security Council also registered its displeasure by calling the U.S. Central Command, known as CENTCOM, and all its forces as “terrorists”, and labeling the U.S. a “supporter of terrorism.”

Iran’s parliament then played its part, with members dressed in the IRGC uniform as they chanted:

Monday’s decision to designate the Iranian corps as a terrorist outfit is the first time that the U.S. has designated an entity of another government as a terrorist organization, placing a group with vast economic resources that answers only to Iran’s supreme leader in the same category as al-Qaeda and the Islamic State.

“This unprecedented step, led by the Department of State, recognizes the reality that Iran is not only a state sponsor of terrorism, but that the IRGC actively participates in, finances and promotes terrorism as a tool of statecraft,” President Donald Trump said in announcing the measure.

The response in Iran was swift and to the point just 24-hours later.

Parliament Speaker Ali Larijani denounced the U.S. decision as the “climax of stupidity and ignorance.” Supreme National Security Council’s spokesman, Keivan Khosravi, said that going forward, “any unusual move by American forces in the region will be perceived as the behavior by a terrorist group.” He did not elaborate.

Iranian newspapers carried reports of the U.S. move along with bellicose commentary on their front pages.

The Guard-affiliated Javan daily said any attack on Revolutionary Guard bases and facilities will be “recognized as a right” for Iran to respond. The hard-line Kayhan newspaper said it gave Iranians “permission” to kill American military personnel.

State-owned IRAN daily went a step further, saying the U.S. move was a “designation of the entire Iranian nation” as terrorist.

AP contributed to this report