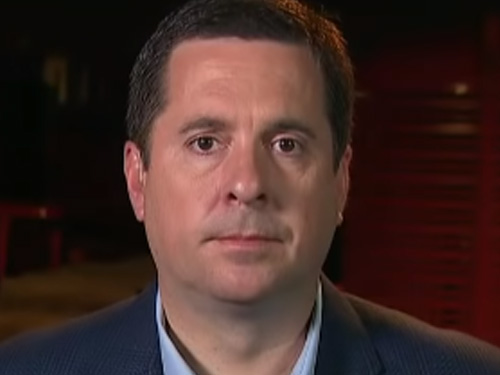 Rep. Devin Nunes joined FNC’s Maria Bartiromo on “Sunday Morning Futures” to discuss his investigation into the Obama administration’s potential abuses of power with regard to investigations into the 2016 Trump campaign.

Now, one of them, conspiracy to lie to the FISA court, Congressman, we had on your colleague Jim Himes recently, who kept pushing back, saying that there was absolutely no wrongdoing in front of the FISA court.

REP. DEVIN NUNES: Well, I don’t really care what they say. They have lied multiple times to the American people. All you have to do is look at their phony memos. They have had the full support of the media, 90 percent of the media in this country.

There’s still more information. I have said this before. This was their insurance policy. A lot of people think the insurance policy was just the overall investigation of the Trump campaign. It’s actually much more conspiratorial than that that’s left behind there.

There was exculpatory information. We talked about it on your show many times. So, look, Maria, I — if you take what the Democrats have said and throughout the last two-and-a-half years, there’s only one thing that you can be certain of. And that is, whatever they tell you is wrong or a lie or they actually mean the opposite.

BARTIROMO: Should the Mueller report be made public, Congressman?

NUNES: Well, what I have said about the Mueller — I think I was one of the first members of Congress to actually say that the Mueller report should be made public, but not just the Mueller report, because, remember, many people that are on the team, the Mueller team, are involved in a lot of these conspiracies, right?

So, you have the leader on the team, the deputy, supposedly, and another top lawyer were both involved in the chain of custody of the Steele dossier, the Democratic oppo dirt. It is impossible for me to believe that those two lawyers, very smart lawyers, didn’t know in the middle of 2016 that that information was dirt coming from the Democrats. It’s impossible.

The other two, you had two FBI agents, Strzok and Page, who were kicked off the Mueller team. So, I want the underlying information, because I don’t believe — I think the indictments that were made by the Mueller team, I think some are very questionable.

And I think there’s pieces of them that always read like Russian spy novels. That was done on purpose to create a narrative to make the American people think, as they were indicting these people, that somehow this had to do with collusion between the Trump campaign and Russia.

NUNES: What I want is the information underlying the report, so that we can actually look into it…

NUNES: … because every time we peel back the onion in this case, what do we find? We find out that, somehow, higher-level officials within the DOJ and FBI were misleading the American people and the courts.

BARTIROMO: Yes. Well, we’re going to keep watching that. We want to find how far up the chain it goes in the Obama Department of Justice and the Obama administration.

Congressman, we will keep fighting and looking for it. Thanks so much for joining us this morning.