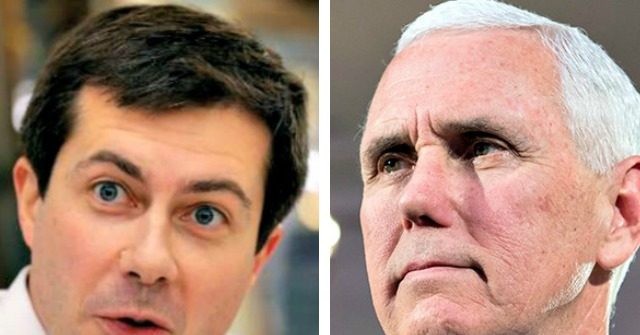 During a Sunday speech at the LGBTQ Victory Fund’s annual National Champagne Brunch in Washington, DC, Buttigieg referred to Pence as the face of religious bigotry against gay Americans.

“Speaking only for myself, I can tell you that if me being gay was a choice, it was a choice that was made far, far above my pay grade,” Buttigieg said. “And that’s the thing I wish the Mike Pences of the world would understand … If you’ve got a problem with who I am, your problem is not with me. Your quarrel, sir, is with my creator.”

But Pence has a history of treating Buttigieg with respect when he was Governor of Indiana, despite the mayor’s continued campaign of aggression towards his evangelical beliefs.

Pence was kind to Buttigieg when the mayor came out as gay in a June 2015 essay in the South Bend Tribune.

“I hold Mayor Buttigieg in the highest personal regard. We have a great working relationship,” Pence said when asked to react to the news in 2015. “I see him as a dedicated public servant and a patriot.”

Buttigieg, who was baptized a Catholic and now attends an Episcopalian church, repeatedly attacks Pence’s religious values in respect to his service in the Trump administration as vice president.

“Who would think that this Über-Evangelical Christian would go down in history as the midwife of the porn-star presidency?” he scoffed in a February interview with New York Magazine.

As a mayor in Indiana, Buttigieg said in the interview that he and Pence “worked together” when the vice president was governor of the state and that Pence “said nice things about me.”

Buttigieg even refers to a moment when Pence personally called him after he was deployed to Afghanistan as a member of the Naval Reserve.

“He was noticeably moved by my deployment,” Buttigieg recalled. “He called me the day I was driving to the base.”

Buttigieg also detailed his respect for Pence in his new book, describing him as “gracious and decent to me in person” but detailed his disappointment after Pence supported the controversial religious freedom law in Indiana.

“If he were here you would think he’s a nice guy to your face, but he’s also just fanatical,” he said.

But in other situations, Buttigieg does not hold back.

In March, Buttigieg again trashed Pence during an appearance at the leftist South By Southwest tech conference.