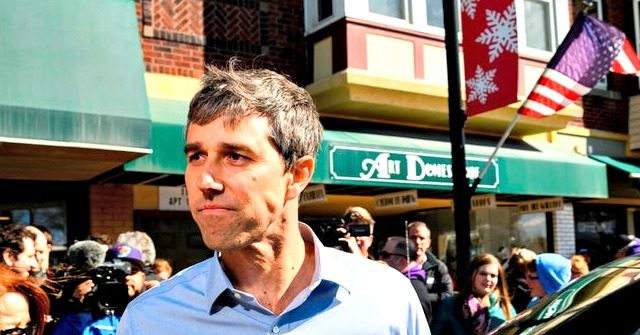 Democrat 2020 presidential candidate Robert “Beto” O’Rourke proposed Friday in Iowa that the U.S. “allow” farmers to give up their “fair share” of crops to fight climate change.

O’Rourke stood aloft as he proclaimed his message at a rally in Marshalltown, Iowa Friday:

If we allow farmers to earn a profit in what they grow, if we allow them to contribute their fair share in combatting Climate Change by growing cover crops, allowing the technologies that invest in precision tilling and farming, capturing more of that carbon out of the air is another way in which they can make a profit. Keep those farms together, pass them on to the next generation, and allow them to provide us our food and national security, our independence from the rest of the world, our ability to provide for the rest of the world.

Iowa’s caucus system is the earliest to pick a contender for respective political parties in the presidential primary election system. The caucuses are scheduled for Republicans and Democrats on February 3, 2020.

The day O’Rourke announced his bid for president, mid-March in Keokuk, Iowa, he called the Green New Deal the “final chance” with just 12 years left to “take incredibly bold action on [the Climate Change] crisis,” according to RealClearPolitics. He told a crowd, “Not to be dramatic, but literally, the future of the world depends on us right now here where we are.” Exclusive–Marcus: Democrats Can't Win Based on Their Ideas, So They Want to Change the Rules of the Game