A major fire is engulfing the famed Medieval Notre-Dame cathedral in central Paris, with smoke billowing over Paris.

The cathedral is in the process of a period of restoration, and in the past couple of days has had sixteen bronze statues removed from the roof area in recent days to facilitate work. The fire appears to have started in the roof where work is taking place.

Conservative MP Nicolas Dupont-Aignan, the leader of the Debout La France party, reacted with shock to the fire writing, ” see the flames and the thick smoke above Paris, I have tears in my eyes.”

The outspoken critic of mass migration, who ran as the Prime Minister candidate for populist Marine Le Pen in the French presidential election second round in 2017, added, “The soul of France bleeds at the beginning of Holy Week. Nearly 1000 years of our civilization is being consumed before our eyes.”

UPDATE 1915 — Roof over the nave has totally burnt away

This dramatic image shows the eastern end of the Cathedral, which has now totally lost its roof:

The image is a stark contrast with a similar view of the same end of the church less than an hour ago: 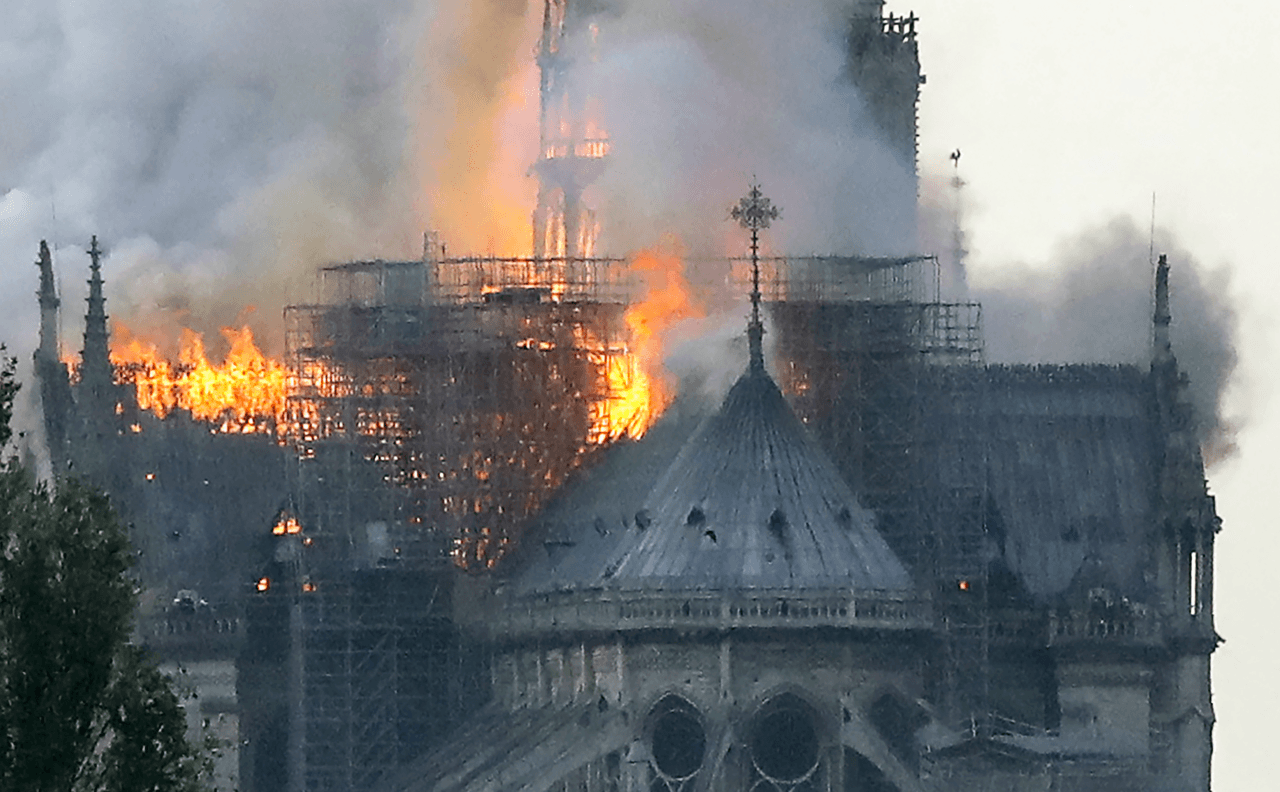 The fire may now threaten the integrity of the cathedral’s famous rose window: 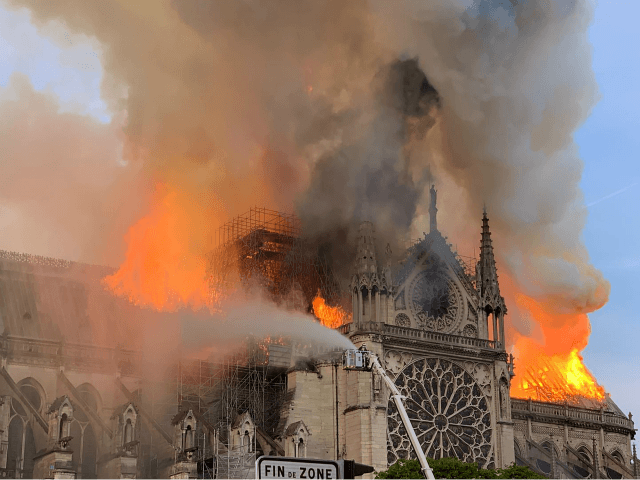 TOPSHOT – Flames and smoke are seen billowing from the roof at Notre-Dame Cathedral in Paris on April 15, 2019. – A fire broke out at the landmark Notre-Dame Cathedral in central Paris, potentially involving renovation works being carried out at the site, the fire service said.Images posted on social media showed flames and huge clouds of smoke billowing above the roof of the gothic cathedral, the most visited historic monument in Europe. (Photo by Patrick ANIDJAR / AFP) (Photo credit should read PATRICK ANIDJAR/AFP/Getty Images)

UPDATE 1905 — The spire of Notre-Dame Cathedral has collapsed

Eyewitnesses to the huge fire engulfing Nore-Dame recorded the moment the central spire collapsed. The fire has now spread to the bell towers:

The splintered remains of the spire can be seen in this Getty image: 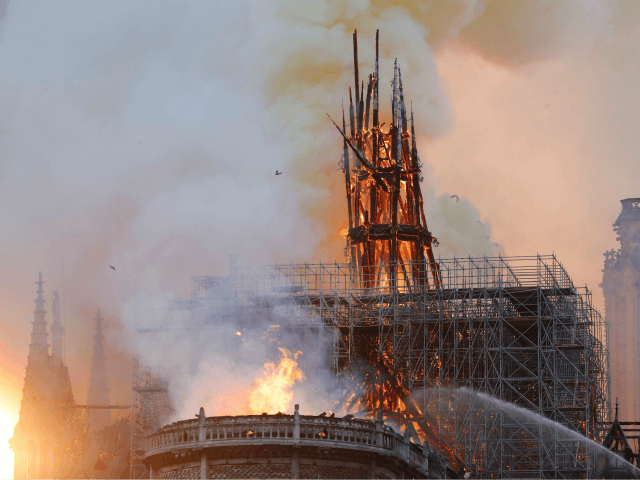 Smoke and flames rise during a fire at the landmark Notre-Dame Cathedral in central Paris on April 15, 2019, potentially involving renovation works being carried out at the site, the fire service said. -FRANCOIS GUILLOT/AFP/Getty Images

UPDATE 1855 — Fire may have started during restoration work

Sixteen bronze statues briefly took to the skies over Paris after they were removed from the Notre-Dame cathedral to undergo restoration work.

Tourists at the world-famous landmark were left stunned on Thursday as the statues — representing the 12 apostles and the four evangelists from the New Testament — were lifted off the spire of the cathedral by crane.

“What’s unique is that it’s the first time we’ve seen them up close since they were set up by Viollet-le-Duc in the 1860s,” Marie-Helene Didier, who is in charge of the renovation work, told AFP.

Its spire, like the rest of the gothic edifice, is undergoing a 11-million-euro ($12.4-million) overhaul financed by the French state to repair damage inflicted by time, pollution and the weather.

“Extraordinary,” said Sofiane, an onlooker from London, as the statues flew through piercing blue skies suspended from a giant 100-metre (300-foot) crane. “I’ll never see anything like it again.”

The statues will be put on display inside the cathedral and will travel two-by-two to a specialised restorer in the Dordogne area of southwest France.

Once all have been renovated, they will be put back to their position staring out over the City of Light in 2022.

The spire mentioned in the report now appears to be a complete loss, and firefighters at the scene say part of the roof has now collapsed.

Considered one of the finest examples of French Gothic architecture, the Notre-Dame de Paris, on the bank of the Seine river, dates back to the 12th century and is one of the major landmarks of Paris is recognised by its flying buttresses and its large, round north rose window. The cornerstone of the cathedral was laid in 1163 in the presence of Pope Alexander III. 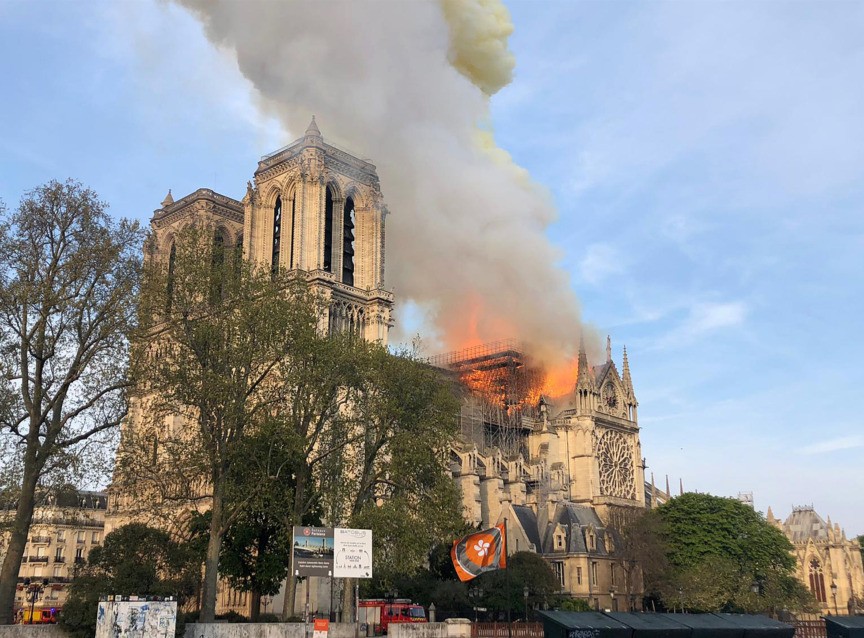 Images taken by press photographers from the roof of the church just last week show the significant extent of the restoration work taking place on the nearly 700-year old structure. Scaffolding can be seen spanning the roof in preparation for the removal of 16 copper statues of the Apostles ahead of their restoration. The statues were ‘flown’ out through the use of straps and a crane on Friday.

Firefighters believe the blaze is “potentially linked” to the renovation work of the building, reports Le Figaro. 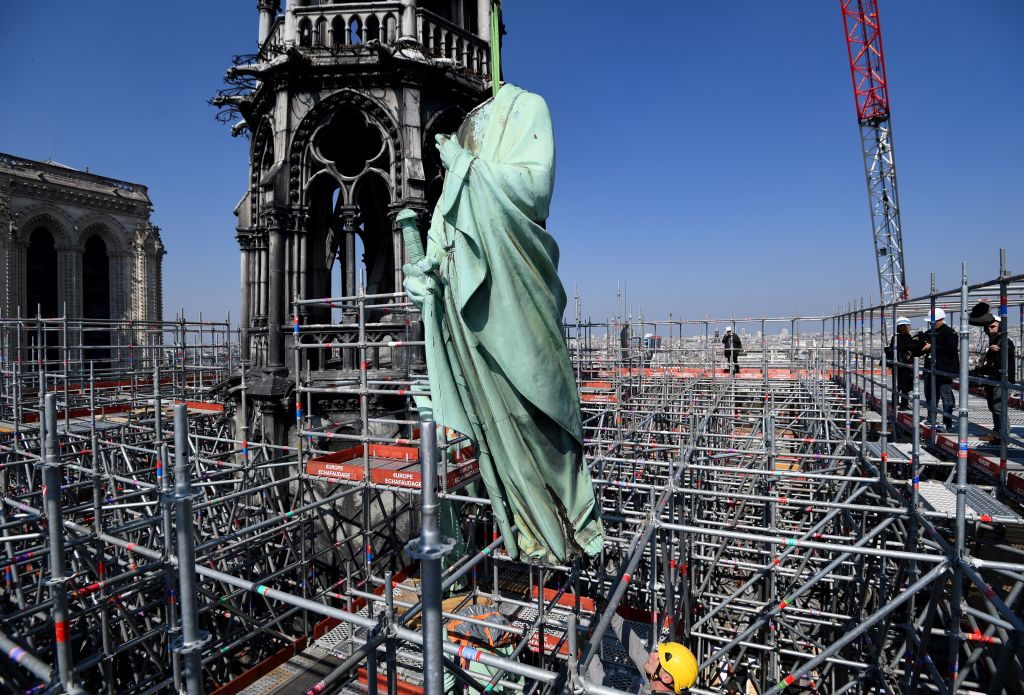 A crane lifts one of 16 copper statues, sitting 50 meters above the ground, off the Notre-Dame-de-Paris Cathedral to be taken for restoration on April 11, 2019 in the French capital Paris. – Using a 120 meter crane at the foot of the cathedral, the sixteen statues, the 12 apostles and the 4 evangelists, which sit around the spire of the cathedral are being removed to be sent to Perigueux, in southwest France for restoration.  BERTRAND GUAY/AFP/Getty Images

Restoration work can be a particularly vulnerable time for historic buildings when power tools and other potential sources of combustion come into close contact with dry timbers and other building materials. The United Kingdom suffered the near total loss of a significant historic building, but on a smaller scale, in 2017 when the building thought to be the oldest hotel in the country — and one of the oldest in the world — burnt down during building work taking place on another historic building next door, which spread.

The world watches on as one of the most important buildings in Western Christianity burns, including U.S. President Donald Trump who has suggested a major intervention to quell the flames. He took to Twitter to write: “So horrible to watch the massive fire at Notre Dame Cathedral in Paris. Perhaps flying water tankers could be used to put it out. Must act quickly!”

So horrible to watch the massive fire at Notre Dame Cathedral in Paris. Perhaps flying water tankers could be used to put it out. Must act quickly!

A police force commander told a Le Figaro reporter on the scene that the fire “will burn a long time.”

Meanwhile, Paris Mayor Anne Hidalgo has spoken out: “A terrible fire is underway at Notre-Dame Cathedral in Paris. The fire brigade is trying to control the flames. We are mobilised on site in close connection with the Diocese of Paris. I invite each and everyone to respect the perimeter of security.” 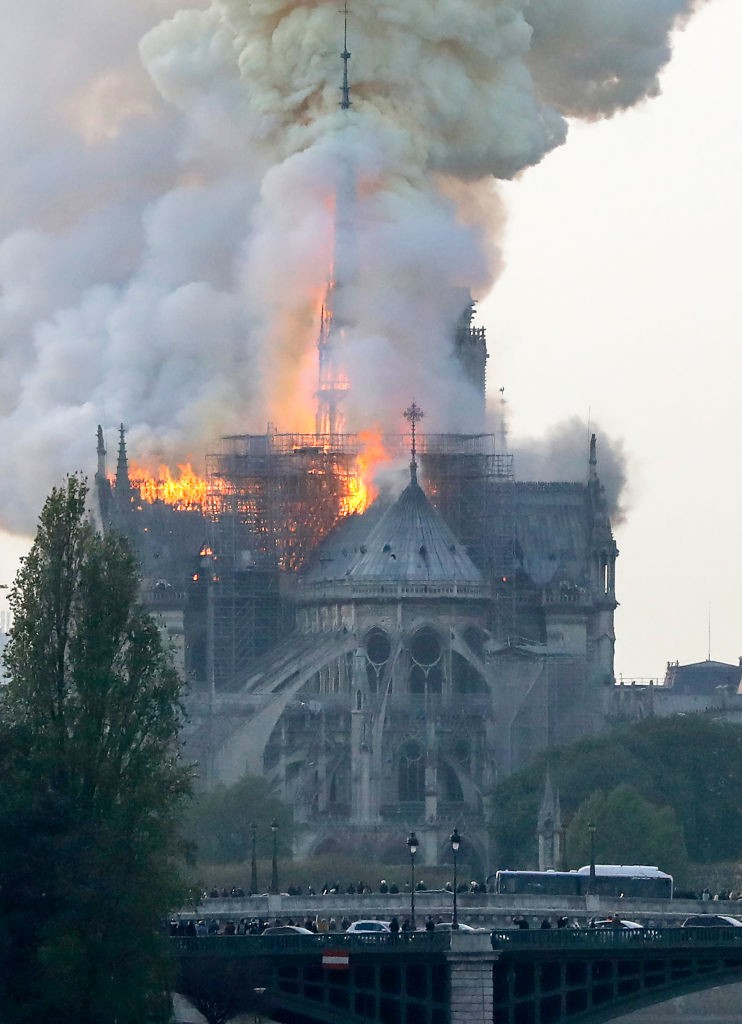 Smokes ascends as flames rise during a fire at the landmark Notre-Dame Cathedral in central Paris on April 15, 2019 afternoon, potentially involving renovation works being carried out at the site, the fire service said. (Photo by FRANCOIS GUILLOT / AFP) (Photo credit should read FRANCOIS GUILLOT/AFP/Getty Images)

Footage of the fire, which is now consuming the historic central spire of the Cathedral, is spreading on social media: 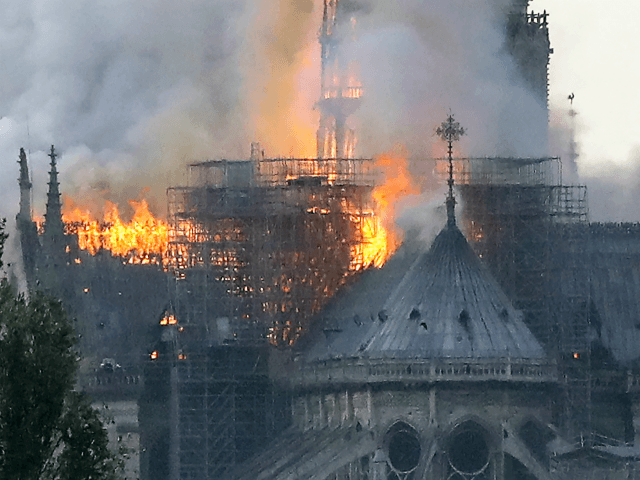 Flames rise during a fire at the landmark Notre-Dame Cathedral in central Paris on April 15, 2019 afternoon, potentially involving renovation works being carried out at the site, the fire service said. (Photo by FRANCOIS GUILLOT / AFP) (Photo credit should read FRANCOIS GUILLOT/AFP/Getty Images)

This story is developing, more follows