Oscar-winning director Clint Eastwood is circling The Ballad of Richard Jewell as his next project, the tragic story about an early victim of our fake news media.

Jewell was a 34-year-old security guard at the 1996 Summer Olympic Games in Atlanta, Georgia, and at first he was rightfully hailed as a hero after he discovered a backpack filled with explosives and risked his own life to evacuate the area. After the bomb went off, dozens were injured and one person was killed. There is no question, though, that many, many more would have died had Jewell not sounded the alarm.

Unfortunately for Jewell, the acclaim didn’t last long. He was overweight, white, and a southerner — the perfect target for our left-wing media… And so, three days later the media reported the F.B.I. was looking at him as a possible suspect. There was zero evidence against Jewell. The entire story was based on a criminal profile of the bomber.

The Atlanta Journal-Constitution launched the hate campaign by comparing Jewell to the serial killer behind a horrible series of child murders in Atlanta.

Immediately, the rest of the unquestioning, totally irresponsible, and reckless media went to town on Jewell, portraying him as a pathetic mama’s boy, a fat guy who failed at law enforcement, a clown in a security guard uniform who planted the bomb to make himself a hero. 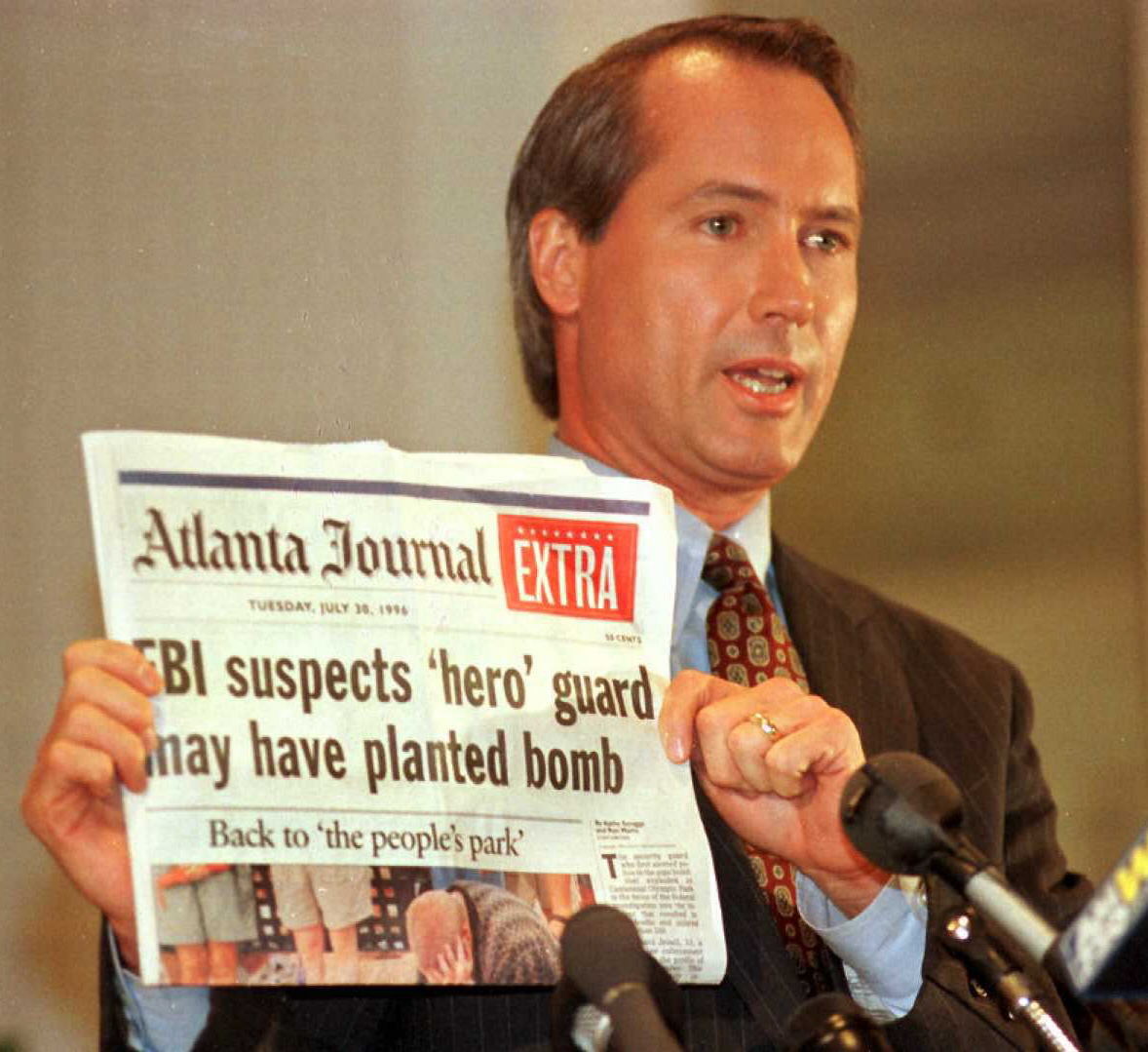 While the F.B.I. tormented the poor man and the late-night comedians humiliated him, our godawful media refused to even question or express any skepticism when it came to playing stenographer for the Clinton administration by way of Attorney General Janet Reno’s F.B.I.

After he was exonerated, Jewell successfully sued NBC News, the New York Post, and CNN. Only the suit against the Atlanta Journal-Constitution was thrown out.

The Jewell case, which I remember vividly, was an early and unforgettable example of the cancer that has now killed the credibility of the American media.

Everything we have seen since, from Rathergate to what was done to George Zimmerman to Brett Kavanaugh to the boys from Covington High School to the Russia Collusion Hoax, was already metastasizing back in ’96: fealty to a Democrat administration, unquestioning transcription for federal law enforcement, rigid enforcement of a political narrative to destroy an innocent man, and the “correct” target: a white southerner.

In 2005, Eric Rudolph pleaded guilty to the bombing.

Jewell never recovered from being turned into a national joke. Some good people tried to help him. He even worked in law enforcement, but he could never outrun the campaign of national vilification. He died of diabetes, heart and kidney disease in 2007. He was 44.

Eastwood’s movie would be based on Marie Brenner’s superb 1997 Vanity Fair article “American Nightmare: The Ballad of Richard Jewell,” that tells the story of Jewell’s “brief moment as a national hero, his hounding by the Feds and the press, and his eccentric friendship with the unknown southern lawyer who helped him through his public torment.”

In the past, Jonah Hill has been attached to the Jewell role with Leonardo DiCaprio playing his attorney. There is no word yet on casting, though Hill and DiCaprio are listed as producers according to IMDB. The Hunger Games and Captain Phillips screenwriter Billy Ray is attached to pen the script.

Clint Eastwood is the perfect choice to helm this. He’ll tell the truth and likely understands that this fake news tragedy is even more relevant today than it was 23-years-ago.

Clint Eastwood, who is now 88-years-young is coming off his critical and box office hit The Mule, which he directed and starred in.