The Philippines province of Pampanga hosted nine crucifixions and hundreds of flagellations in its Good Friday observance this year, a tradition the Vatican discourages but continues to thrive thanks to faithful who view it as the ultimate act of penance.

Those crucified re-enact Jesus’s Stations of the Cross – a Catholic ceremony done around the world, but not while physically carrying a heavy cross – in observance of his sacrifice, then accept being nailed to a cross and displayed publicly. They receive medical care after being taken down from the cross a few minutes later.

Among those participating were Ruben Enaje, who experienced his 33rd crucifixion this year and Mary Jane Sason, the only woman participating who has been crucified four times, according to the Philippine Inquirer.

A female Philippine Christian devotee is nailed to a cross during a reenactment of the Crucifixion of Christ during Good Friday ahead of Easter in the village of Cutud near San Fernando on April 19, 2019. (NOEL CELIS/AFP/Getty Images)

Enaje returned after what he told reporters was a particularly joyful Good Friday experience last year.

“In the past, I went home injured and limping, but this year I feel so great,” he told Reuters last year. “I feel like he [Jesus] is telling me ‘go ahead, keep it up.’” 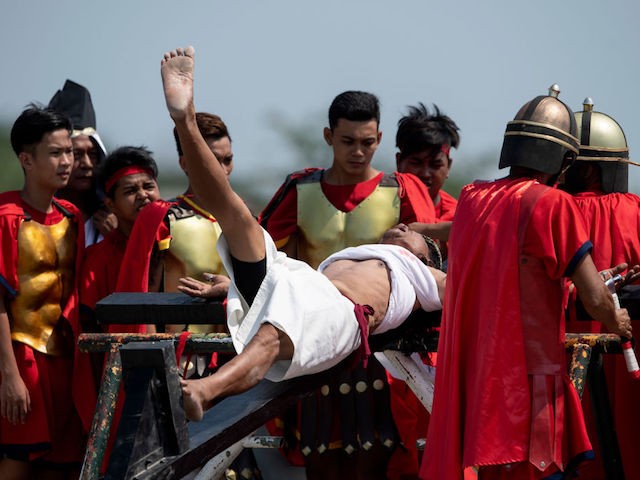 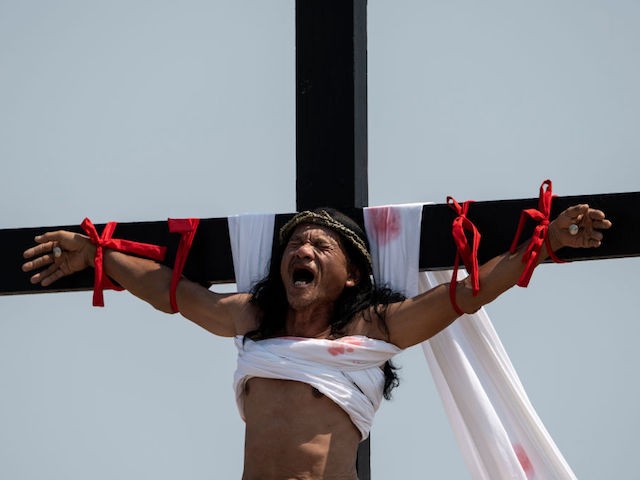 Philippine Christian devotee Ruben Enaje, 58, reacts as he is nailed to a cross during a reenactment of the Crucifixion of Christ during Good Friday ahead of Easter in the village of Cutud near San Fernando on April 19, 2019. (Noel CELIS / AFP)

Most of those participating have had multiple experiences in the religious ceremony. In addition to the aforementioned, among those crucified were 12-time veteran Angelito Las Piñas and eight-time veteran Edison Francisco. 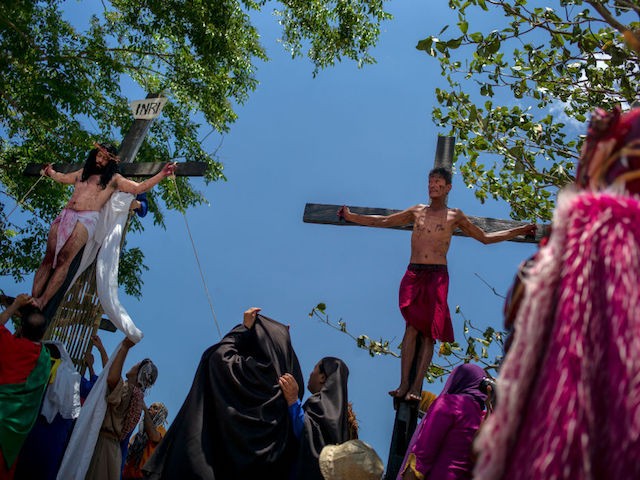 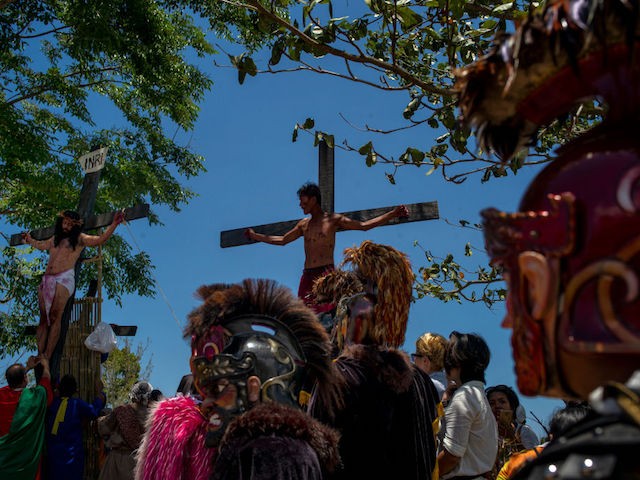 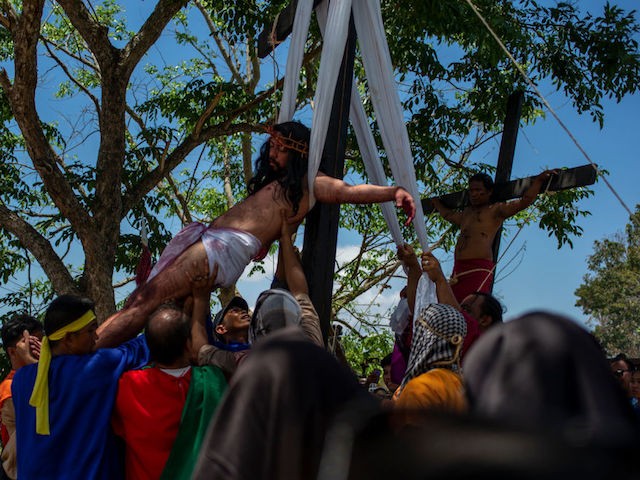 Residents perform the Passion of the Christ on April 19, 2019 in Boac, Marinduque in the Philippines. The Philippines, a predominantly Catholic country in Southeast Asia, join other Catholic nations in observance of holy week. (Jes Aznar/Getty Images)

Wilfredo Salvador has been crucified 14 times. He told Agence France-Presse (AFP), “I will not stop this for as long as I am alive, because this is what gives me life,” explaining that he committed to the sacrifice after his faith saved him from a nervous breakdown.

The Inquirer notes that the bloody ritual has become increasingly unpopular in recent years, attracting few new participants. The lowest number of crucifixions before this year was 11 in 2015. Many more contribute to other parts of the ceremony, however – dressing as Roman soldiers and helping crucify and then heal others or walking the stations of the cross while self-flagellating. 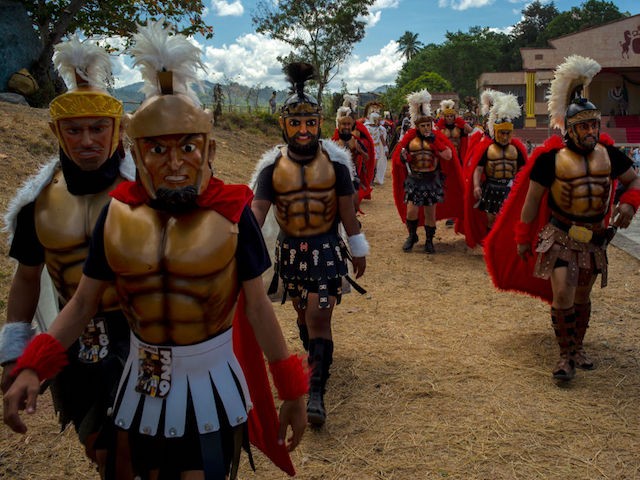 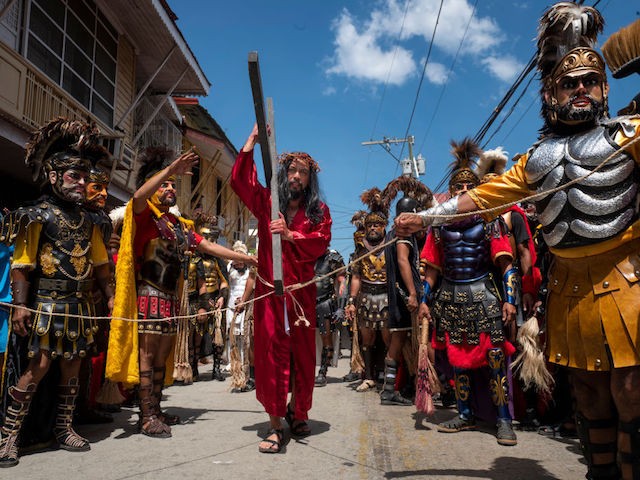 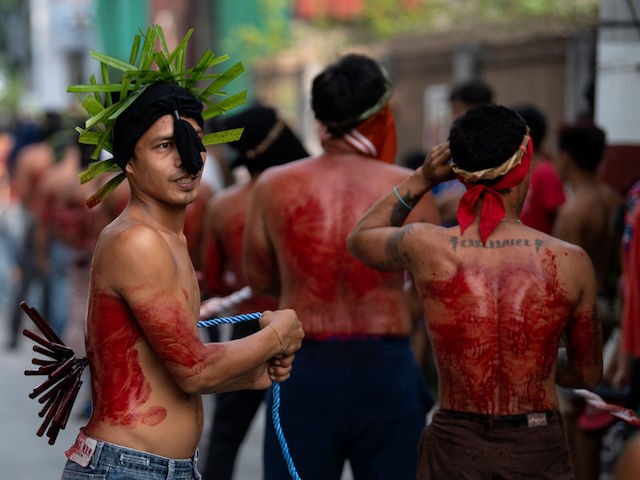 Christian devotees whip their backs with bamboo strips on a street in San Juan, Pampanga on April 19, 2019, during the reenactment of the crucifixion of Jesus Christ on Good Friday. (NOEL CELIS/AFP/Getty Images) 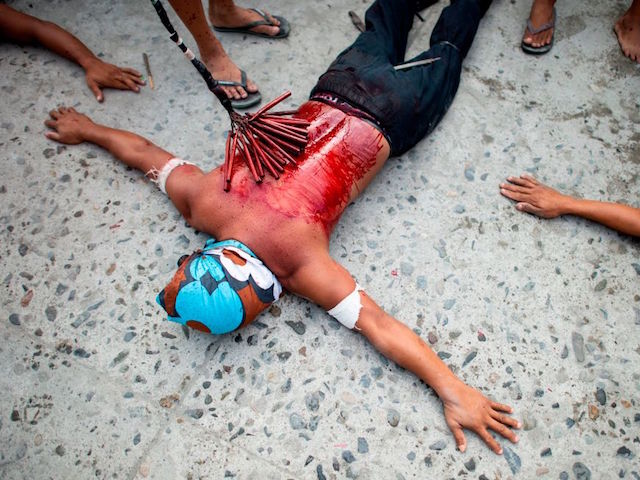 A flagellant lie on the ground as part of their penitence during the re-enactment of the crucifixion of Jesus Christ for Good Friday in San Juan, Pampanga, north of Manila on April 19, 2019. (NOEL CELIS/AFP/Getty Images)

The Philippines boasts one of the largest and most concentrated Catholic populations in the world at over 85 percent of the general public. Over 90 percent subscribe to some form of Christianity, according to the CIA World Factbook.

President Rodrigo Duterte addressed the country Friday urging “prayer and reflection,” a departure from his typical broadsides against the Catholic Church. Which raised Catholic and claiming to believe in God, Duterte also alleges a Catholic priest molested him as a child, prompting regular asides during policy speeches calling for Filipinos to abandon the Church and pray privately.

“I trust that the virtues of faith, hope and charity will continue to drive all our efforts in nation-building. With guidance from Christ’s sacrifice, let us work towards the attainment of our noble aspirations for the nation,” Duterte said on Friday. “May this blessed occasion be an opportunity for prayer and reflection as we strive to uphold what is good and just.”