A freelance journalist who spent a month this year in Venezuela accused the U.S. government and media of distorting the ongoing crisis in the country, during a Tuesday night appearance on Tucker Carlson’s show.

Venezuelan Interim President Juan Guaidó called for a military uprising against socialist dictator Nicholas Maduro on Tuesday. Maduro is viewed by the Trump administration to be an illegitimate leader after they determined his re-election to be full of fraud and corruption. (RELATED: Firefights In Venezuelan Capital As Military Uprising Ensues)

“Your viewers won’t be shocked to hear this, Tucker, but the fake news media are lying about the situation in Venezuela,” stated Anya Parampil, who was in Venezuela in February. “Let me put it for you this way. Imagine if Hillary Clinton had refused to admit defeat after losing to President Trump in 2016 and banded together a group of 24 U.S. soldiers and attempted to take the White House by force. I don’t think that she would be walking freely on the streets the way that Juan Guaido is right now in Caracas and I certainly think that the news media will be calling it rightfully a coup.” (RELATED: WATCH: The Wildest Videos Of The Venezuela Uprising)

“The opposition has no popular support. Juan Guaido proves today once again that he will only ride into power on the back of the U.S. tank and what’s more we hear about a humanitarian crisis there, Tucker, but we never hear is that is the intended result of U.S. sanctions, which have targeted Venezuela since 2015,” she continued.

“President Trump if he truly cared about the American — or the Venezuelan people, and American people for that matter, he would end this disastrous policy, he would end the sanctions and he would look into John Bolton’s eyes, into Elliot Abrams’ eyes and Mike Pompeo’s eyes and say, you are fired.” 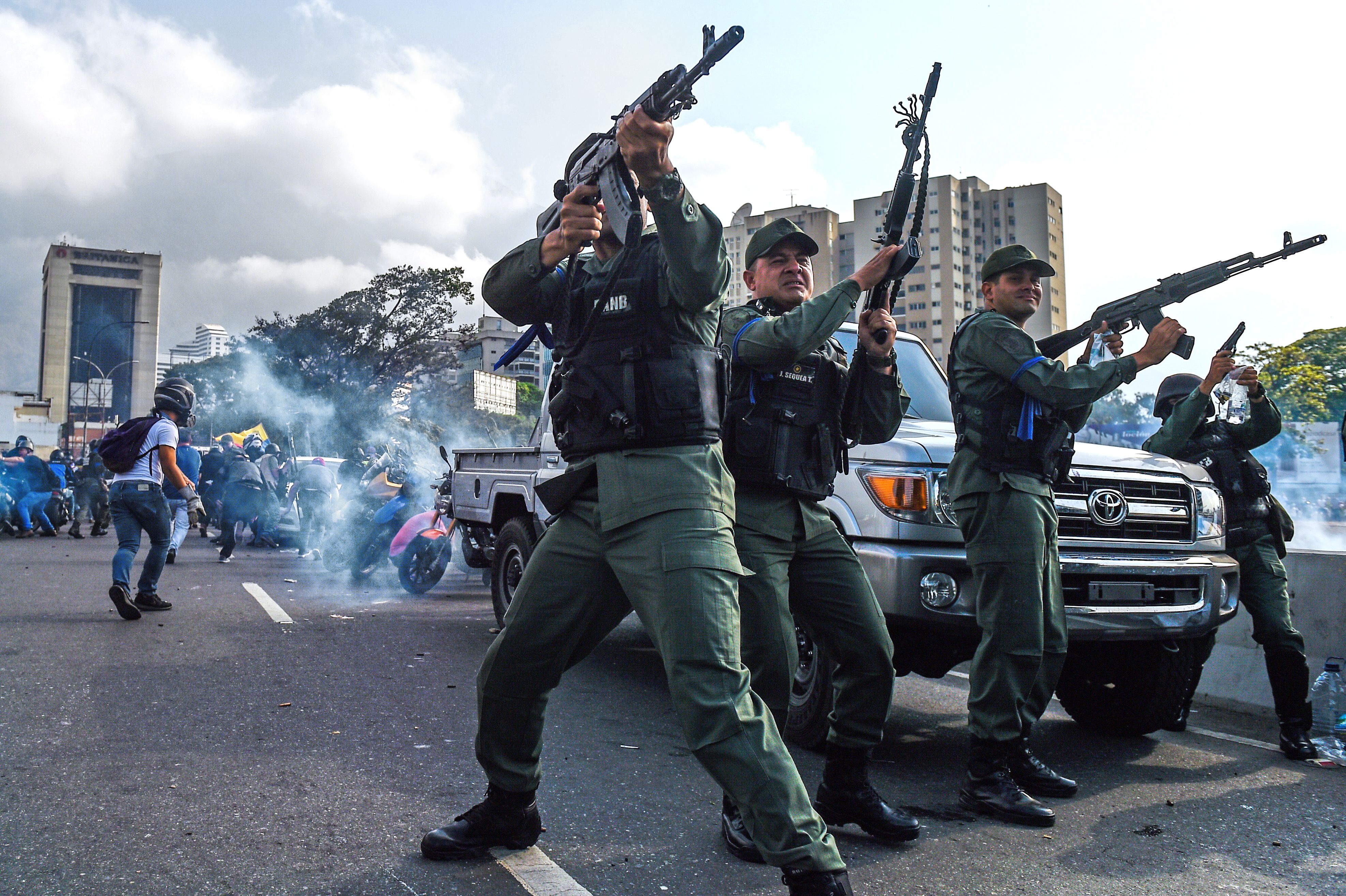 Members of the Bolivarian National Guard who joined Venezuelan opposition leader and self-proclaimed acting president Juan Guaido fire into the air to repel forces loyal to President Nicolas Maduro who arrived to disperse a demonstration near La Carlota military base in Caracas on April 30, 2019. (Photo by FEDERICO PARRA/AFP/Getty Images)

The Daily Caller followed up with Parampil and asked her to explain why she believes the United States is backing Guaido. She said:

Regime change has had bipartisan support in countries that resist the US sphere of influence from Yugoslavia to Iraq to Libya to Syria, and now Venezuela. Because Guaido and his shadow administration have promised to privatize Venezuela’s natural resources, which include the largest oil reserves in the world, he satisfies foreign policy elites in both parties, as well as their corporate paymasters.

Bolton has even admitted that US companies would like to get their hands on Venezuela’s oil. It is their interests which many elected Democrats and Republicans both represent: not the desires of the Venezuelan people, and certainly not the US public, which elected Trump because he promised to end these wars. It is time for Trump to fire his national security team—which is lying to him—and abandon this failed and destructive coup policy.

Not only is his legacy as president at stake, but the lives of millions of Venezuelans hang in the balance. They will be the first casualties if the deadly sanctions continue or if the regime change operation escalates into a military intervention.

ANOTHER DEMOCRAT HOAX EXPOSED! Ohio AG Reveals There’s NO Such Case of a 10-Year-Old Getting Raped Like Benedict Biden Claimed Last Week!