WASHINGTON, D.C. — Democrats claim the Trump White House does not have much interest in preventing Russians from interfering in future U.S. elections, but claim the previous administration did all it could to stop Russia from meddling in the 2016 presidential election.

Immediately before Attorney General Bill Barr testified before the Senate Judiciary Committee on Wednesday, President Donald Trump tweeted his criticism of former President Barack Obama regarding the matter, asking him why he did not do more. (RELATED: Barr: Trump Was ‘Falsely Accused’ Of Being A Treasonous Russian Agent)

Why didn’t President Obama do something about Russia in September (before November Election) when told by the FBI? He did NOTHING, and had no intention of doing anything!

The Mueller report stated that Russian meddling began in 2014, but Democratic Connecticut Sen. Richard Blumenthal insisted that the Obama administration attempted to stop it from happening and claimed the Trump administration denied any interference occurred.

“The previous administration made efforts to stop it. Obama told Putin to cut it out. They imposed sanctions. My view was that perhaps more could have been done in hindsight. But they were at least moving in the right direction as opposed to simply denying that there was any meddling which is Trump’s attitude,” Blumenthal said Tuesday.

Just minutes before, however, Senate Minority Leader Chuck Schumer acknowledged to reporters that the Trump White House signed off on $380 million for the states to spend on election security in 2018.

“It’s one of those government programs that was put together and was spent very well,” Schumer said.

Additionally, the Trump administration, according to Foreign Policy magazine, has expelled “dozens of Russian diplomats, and providing lethal weapons support to Ukraine—a step that former President Barack Obama had been unwilling to take.”

Democratic California Sen. Dianne Feinstein said she “wasn’t prepared” to respond at this time about how the Obama administration should have reacted to Russia’s intrusion, adding that she did not “know any of the particular data of [the election interference] beginning in 2014.” 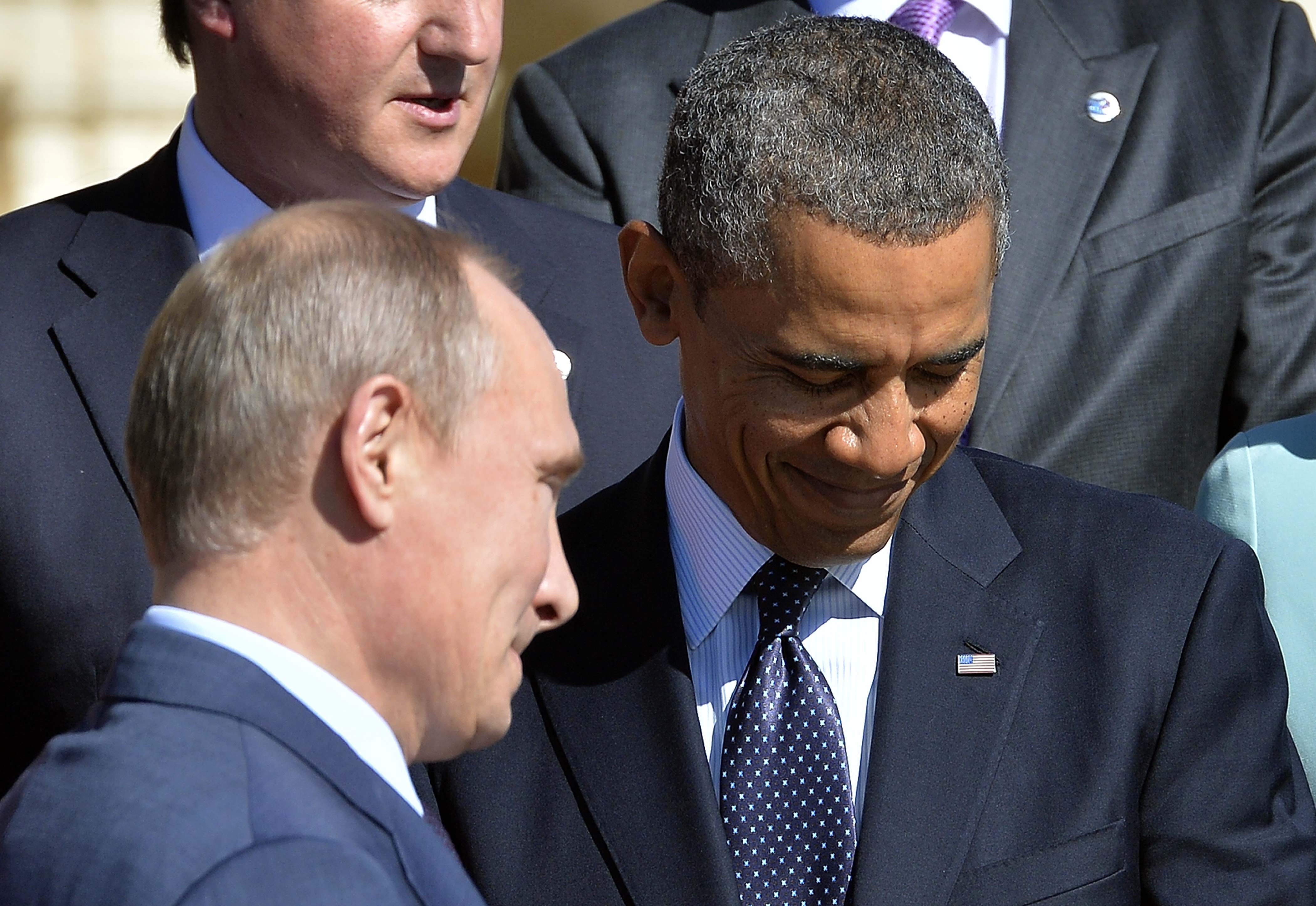 Russias President Vladimir Putin (L) walks past US President Barack Obama as he arrives to pose for the family photo during the G20 summit on September 6, 2013 in Saint Petersburg. (Photo by JEWEL SAMAD/AFP/Getty Images)

Democratic Vermont Sen. Patrick Leahy only questioned how much the Obama administration knew about the Russian meddling before the attempted interference actually occurred.

In August 2017, Politico reported the Obama administration became aware of Russia’s intent to interfere in the upcoming U.S. elections by 2014.  According to the report, the administration learned that the Kremlin was establishing a disinformation unit that could be deployed to disrupt Western countries like the United States.

Democratic Illinois Sen. Dick Durbin pointed the finger at Senate Majority Leader Mitch McConnell, who he says did not support former President Barack Obama when his administration announced that Russia was behind the hacks of the emails of the Democratic National Committee and Hillary Clinton campaign chairman John Podesta.

“The President on October 7, before the election, made that declaration and asked for bipartisan support and Senator McConnell would not join him,” said Durbin.

More than a dozen current and former officials, according to Politico, in the national security field, intelligence agencies, State Department and Pentagon almost all agreed that the former Obama administration was well aware of what the Russians were doing but did not react as forcefully as it could have.

Kerry Picket is a host on SiriusXM Patriot 125

Nikki Haley: The Only Ones Mourning For Soleimani Are Democrats

Iran Hopes for a Return of a Democratic President