WASHINGTON — The special counsel, Robert S. Mueller III, twice pushed Attorney General William P. Barr to release more of his team’s investigative findings in late March, citing a gap between Mr. Barr’s interpretation of them and their full report, according to a letter from Mr. Mueller released on Wednesday.

Mr. Mueller and his investigators also pressed the Justice Department to include summaries of their work in the hours before Mr. Barr released a four-page letter of his own on March 24, the new document showed. Mr. Barr’s letter allowed Mr. Trump to wrongly claim that he had been vindicated in the Russia investigation.

Mr. Mueller’s letter revealed deep concern about how Mr. Barr handled the initial release of the special counsel’s findings — which Mr. Mueller said created “public confusion about critical aspects of the results of our investigation.”

“This threatens to undermine a central purpose for which the department appointed the special counsel: to assure full public confidence in the outcome of the investigations,” Mr. Mueller wrote.

Members of a Senate panel pushed Mr. Barr on Wednesday just after Mr. Mueller’s letter was released to explain his decisions about the Russia investigation over the past month, and some Democratic lawmakers have demanded his resignation.

The letter, the existence of which The New York Times and The Washington Post revealed late on Tuesday, is the first public evidence of widespread concern among Mr. Mueller and his team that the attorney general distorted their findings in his initial presentation of them. 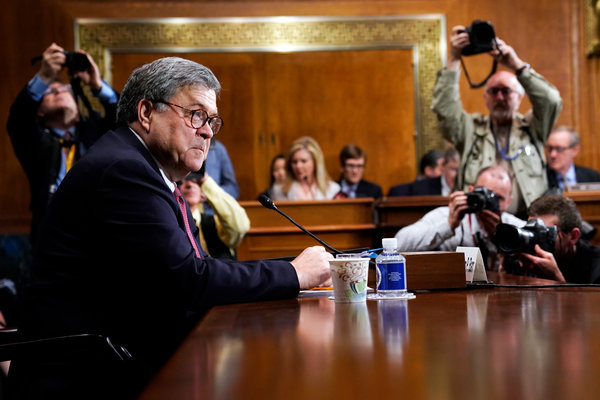 Attorney General William P. Barr is testifying before the Senate Judiciary Committee on Wednesday about his decisions around the report from the special counsel, Robert S. Mueller III.

It also revealed an extensive back and forth between the special counsel and Mr. Barr in the tense days after Mr. Mueller delivered a 448-page report to the Justice Department that presented the conclusions of his office’s 22-month-long investigation.

A rift between the two men appears to have grown in the weeks since, with Mr. Barr challenging the special counsel’s legal analysis on how some of the president’s actions might have amounted to criminal obstruction of justice. In the hours before the Mueller report’s public release, Mr. Barr gave a news conference during which he said that some of Mr. Trump’s behavior — when put in “context” — was understandable.

During congressional testimony last month, Mr. Barr demurred when asked whether he believed that the investigation was a “witch hunt”— an often repeated line by Mr. Trump.

Mr. Barr said it “depends on where you’re sitting.”

Mr. Mueller’s office first informed the Justice Department of their concerns on March 25, a day after Mr. Barr released his letter clearing the president but declined to release the special counsel’s findings along with his letter.

Mr. Mueller added, “The summary letter the department sent to Congress and released to the public late in the afternoon of March 24 did not fully capture the context, nature, and substance of this office’s work and conclusions.”

Mr. Mueller asked the Justice Department to release the summaries of his findings.

“Release at this time would alleviate the misunderstandings that have arisen and would answer congressional and public questions about the nature and outcome of our investigation,” Mr. Mueller wrote.

Deaths of 3 Americans at SANDALS resort in Bahamas under investigation… How 'most conservative gov in NC history' became 'RINO'…