London Marathon runners on the tail-end of the race were called “fat” and “slow” while passing through clean-up operations along the course, according to an official pacer.

Similar to other marathons, London recruits volunteers to run at specific paces as a way to aid participants in their timing. Pacer Elizabeth Ayres was asked to run the course in 7.5 hours for slower runners, the first time the marathon had pacers slower than six hours.

Ayres and the other participants, however, were “told to hurry up” as cleaning operations had already begun around them early on in the race. Ayres and the participants encountered numerous issues, such as no water stations after the third mile, being sprayed with water and chemical fluid from clean-up vehicles and being forced onto the pavement due to traffic. (RELATED: Lukas Bates Runs The London Marathon In Big Ben Costume)

Ayres outlined her “horrible” experience in a Facebook post and in an interview on BBC’s Victoria Derbyshire program:

James Miller, 35, was running for a dementia charity and finished in just over eight hours. Miller, however, felt that they were “forgotten about” by marathon officials as the course was being picked up while they were still running.

“The worst part was the clocks and timing mats being taking away, so when I passed the 30 and 35 km points my time wasn’t recorded and I wasn’t able to keep track of the progress I was making towards the finish line,” said Miller.

“I even had to ask for directions at a couple of points as the route wasn’t obvious. It was like you were forgotten about,” he added.

In addition to the issues with marathon clean-up, the runners faced “horrendous” treatment from event officials and volunteers. Comments such as, “If you weren’t so fat, you could run,” and, “This is a race, not a walk,” were directed towards the runners with Ayres. (RELATED: Icelandic Hero Takes The Subway To Finish NYC Marathon)

“I had runners that were crying — ones saying they were going to go home and quit,” said Ayres, mentioning that she would “rather the race was canceled than people being spoken to like that.”

As the runners were approaching the 22nd mile, the roads were opened and her group had to run into traffic. While they approached the landmark Tower Bridge, the runners were blocked for a few minutes by sewage trucks and had to weave through vehicles to get by. 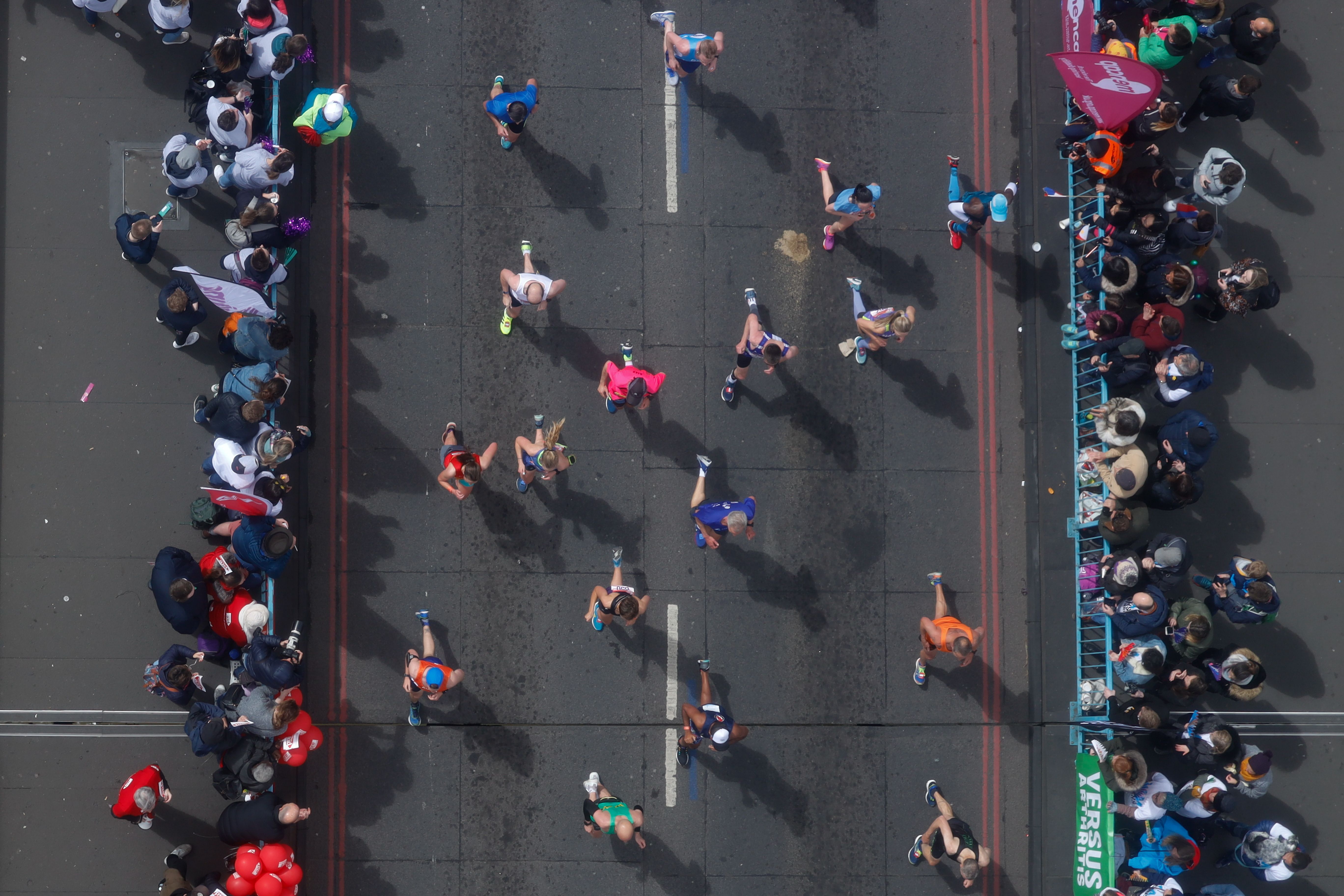 TOPSHOT – Competitors run across Tower Bridge as they compete in the 2019 London Marathon in central London on April 28, 2019. (TOLGA AKMEN/AFP/Getty Images)

“Tower Bridge is supposed to be where every runner gets their epic marathon shot. Not for us,” said Ayres.

“It can be so easy if you’re a faster runner to kind of not notice what’s going on in the back,” said Ayres. “They are heroes at the back, they are my heroes … It was horrible, but they got their medals. I’m so proud of them.”

Hugh Brasher, the London Marathon event director issued an apology to Ayres and the runners, saying that they are going to launch a “full investigation” into the matter. (RELATED: Double Amputee Veteran Runs Fourth Boston Marathon Race Since Losing His Legs)

“We work hard to provide the best possible experience for every runner in the London Marathon and we were very sorry to hear about the experience of Elizabeth and a small number of other runners on Sunday,” said Brasher.

“A senior member of our team called Elizabeth yesterday to find out more and we are now looking into this in detail as part of a full investigation. We’ll be talking to the people involved to find out what happened and we’ll also be contacting the runners who were in the group being paced by Elizabeth.”

Getting Off the Electrical Grid – #SolutionsWatch