“Facebook said on Thursday it has permanently banned several far-right figures and organizations including Nation of Islam leader Louis Farrakhan …” the Post article’s lede by Elizabeth Dwoskin read. (RELATED: Don Jr.: The ‘Alliance’ Between Big Tech And The Activist Left ‘Prevents People From Being Heard’)

Later, the correction called Farrakhan an “extremist leader who has espoused anti-Semitic views.” The reworded article included “anti-Semitic figures” to describe the Nation of Islam leader:

Correction: Louis Farrakhan is an extremist leader who has espoused anti-Semitic views. An earlier version of this story and headline incorrectly included him in a list of far-right leaders.

Facebook said on Thursday it has permanently banned several far-right and anti-Semitic figures and organizations, including Nation of Islam leader Louis Farrakhan, Infowars host Alex Jones, Milo Yiannopoulos and Laura Loomer, for being “dangerous,” a sign that the social network is more aggressively enforcing its hate speech policies under pressure from civil rights groups.

The Atlantic made the same mistake.

In an effort to contain misinformation and extremism that has increasingly spread across the platform, Instagram has banned several prominent right-wing extremists.

The new write-up separated the ideologies of the extremists mentioned in the post:

In an effort to contain misinformation and extremism that have spread across the platforms, Instagram and its parent company, Facebook, have banned several prominent right-wing extremists including Alex Jones, Infowars, Milo Yiannopoulos, Paul Joseph Watson, Laura Loomer, and Paul Nehlen under their policies against dangerous individuals and organizations. They also banned Nation of Islam leader Louis Farrakhan, who has repeatedly made anti-semitic statements.

However, The Atlantic’s header remained the same at the time this story was published.

The New York Times’ social media team even got in on the action with a tweet that seemed to lump Farrakhan in with “other fringe right-wing personalities.” 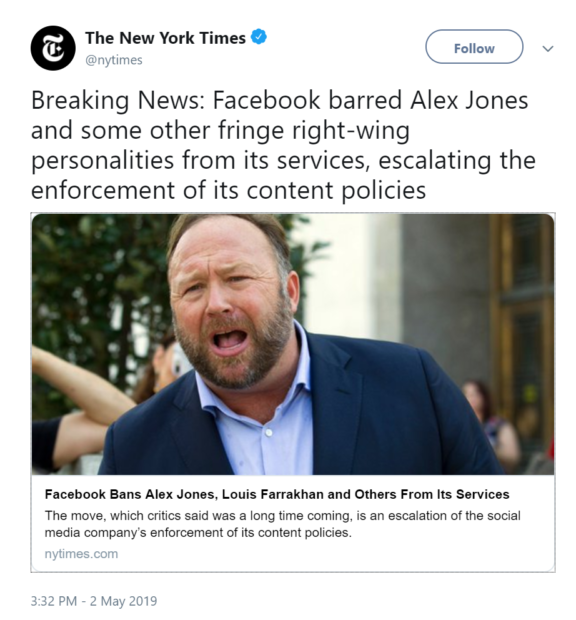 The Washington Post also changed their headline to read, “extremist leaders,” but The DC Examiner’s Julio Rosas saved a version of the original and posted the link via Twitter:

The “buried lede,” according to Rosas, is Farrakhan’s history of meeting with left-wing leaders.

Buried lede: Far-right leader has a history of meeting with Democrats. pic.twitter.com/WlzZpystjJ

In addition to recently uncovered pictures and footage of the Nation of Islam founder and prominent anti-Semite posing and gladhanding with prominent Democrats from Barack Obama to Maxine Waters over a decade ago, Farrakhan found time just last September to pose for a picture with former Attorney General Eric Holder at singer Aretha Franklin’s funeral, where he sat in the front row.

Meanwhile, the reaction on Twitter was swift and brutal:

A thing I learned today: Louis Farrakhan is a Republican …apparently pic.twitter.com/EL28pxZRCB

Are you effing kidding me?

Here’s some iron-clad evidence of where Farrakhan is on the political spectrum, idiots.

Hey @washingtonpost. Are you going to explain your correction here or nah? Last I checked Farrakhan is on your team. pic.twitter.com/FLiMjhR4FS

Gen. Wesley Clark’s Cell Phone Rings During CNN Appearance. What He Does Next Earns Compliments From The Host