UPDATE 5:23 PM EST: The Washington Post has added a correction to the post in question — after this article was published. The paper held off on a correction on its site for nearly two hours after acknowledging the error on Twitter. The headline on Breitbart’s story has been updated to reflect this change.

The Washington Post described Nation of Islam leader Louis Farrakhan as “far-right” Thursday, then scrubbed the error from the article’s headline and text without acknowledging the edit.

The false label was also included in the first line of author Elizabeth Dwoskin’s article.

What in the actual hell? Louis Farrakhan has never once been considered on “the right” – far or otherwise. @washingtonpost what are you doing?? You don’t even have to dig much to get a list of all the appearances he’s made w/lefties over the years. pic.twitter.com/mIPHHAewMp

We have deleted this tweet because it incorrectly included Louis Farrakhan, who has espoused anti-Semitic views, in a list of far-right leaders. Facebook banned extremist figures including Farrakhan, Alex Jones, Milo Yiannopoulos for being “dangerous” https://t.co/iCI8pzK6aR pic.twitter.com/m87t1fglrZ

However, the paper has not acknowledged any error on the article page itself — or told readers that its editors altered the headline, lead paragraph, and URL after publication.

Despite the stealth correction, the article has received the endorsement of NewsGuard, a Microsoft partner that marks news sources as reliable or not in a web browser extension — even on a cached version of the article with the false “far-right” label still included in the URL. 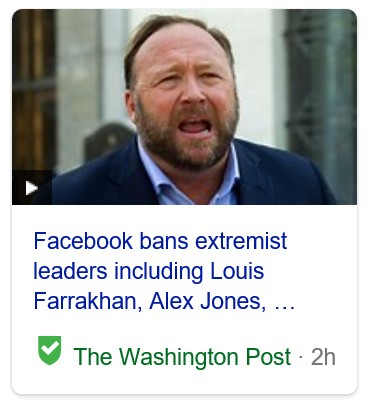 “This website adheres to all nine of NewsGuard’s standards of credibility and transparency,” a pop-up reads when users mouse over the green checkmark next to the Post‘s name. Among those criteria: “Regularly corrects or clarifies errors.”

NewsGuard similarly defended a stealth edit from corporate media in February, saying that the New York Times did not run afoul of its policy by altering a headline without acknowledging the update.

Another article published in The Atlantic about the Facebook bans used the headline “Instagram and Facebook Ban Far-Right Extremists,” with a photo of Farrakhan in the featured image. As of this writing, it has not been corrected.

Farrakhan, who has praised Adolf Hitler and promotes an anti-Semitic and black nationalist worldview, has a number of well-documented relationships with Democratic lawmakers.

Last October, Farrakhan said during an address that he was not an “antisemite” but an “anti-Termite.”

“So when they talk about Farrakhan, call me a hater, you know they do, call me an antisemite–stop it! I’m anti-termite! I don’t know nothing about hating somebody because of their religious preference,” he said