The Israeli military sent an additional tank brigade to the Gaza border on Sunday and prepared for fighting in the coming days after over 450 rockets and mortar shells were fired into southern Israel from the Gaza Strip over the course of 24 hours this weekend, killing an Israeli man and injuring several others.

In response to the attacks, the Israel Defense Forces said it bombed over 220 military targets in the Strip, causing considerable damage to terror groups’ facilities, but relatively few casualties in the densely populated coastal enclave.

The fighting began shortly after 9:30 a.m. Saturday, continuing into Sunday morning with a few hours-long periods of calm overnight.

The exchanges of Palestinian rocket fire and Israeli airstrikes appeared to slow on Sunday morning, but both sides said they would step up their retaliations if the other side’s attacks persisted. 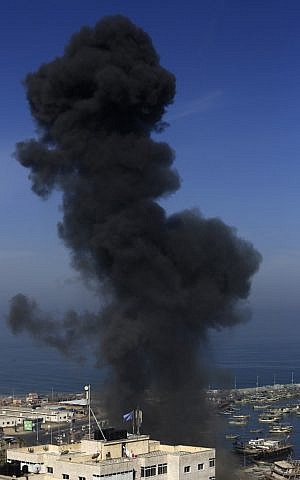 Smoke billows above buildings in Gaza City during an Israeli airstrike on the Palestinian enclave in response to rocket fire from the Strip on May 5, 2019. (MOHAMMED ABED / AFP)

An IDF spokesperson said the military sent its 7th Armored Brigade southward “so that there would be a force available in the Gaza Division in case there is a need for it.”

The intense violence that engulfed the region over the weekend began on Friday evening, when a sniper in Gaza shot at two soldiers along the border, injuring them, and the military responded with a strike on a Hamas position that killed several members of the Islamist terror group.

The exchange of fire followed several weeks of relative calm between Israel and Gaza amid an unofficial armistice, which appeared to be breaking down as terrorists in the Strip stepped up their violent activities along the border in the days preceding the outbreak of fighting. Gaza terror groups said their actions were retaliation for Israel not abiding by the ceasefire agreement by halting the transfer of Qatari money into Gaza — a charge Jerusalem denied, blaming the delay on Qatar and the United Nations.

According to the IDF, approximately 70 percent of the more than 450 rockets and mortar shells fired at Israel struck open fields, where they caused neither injuries nor damage. Over 150 projectiles that were heading toward populated areas were intercepted by the Iron Dome missile defense system, the army said. 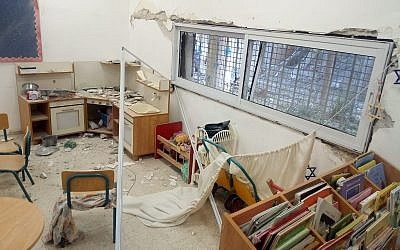 A kindergarten in the southern town of Sderot that was hit by shrapnel from a rocket fired from the Gaza Strip that struck its courtyard on May 5, 2019. (Sderot Municipality)

Despite what the military said was excellent performance by the Iron Dome, several projectiles directly struck houses and apartments or landed just outside them, including one that hit the courtyard of the home of Moshe Agadi, 58, a father of four, who was declared dead after being rushed to Ashkelon’s Barzilai hospital with shrapnel wounds at around 2:30 a.m. Sunday.

At least three rockets landed outside schools in southern Israel, which were empty due to the weekend. One of those strikes, outside a kindergarten in the southern town of Sderot, caused significant damage to the building overnight, as shrapnel from the projectile ripped through walls, windows and furniture inside the school.

The damage was not found until late Sunday morning as the kindergarten was closed for the weekend and was ordered shut by the military on Sunday as a precautionary measure. The kindergarten will remain closed and the children will be sent to another school until the building can be fixed, a Sderot municipal spokesperson said. 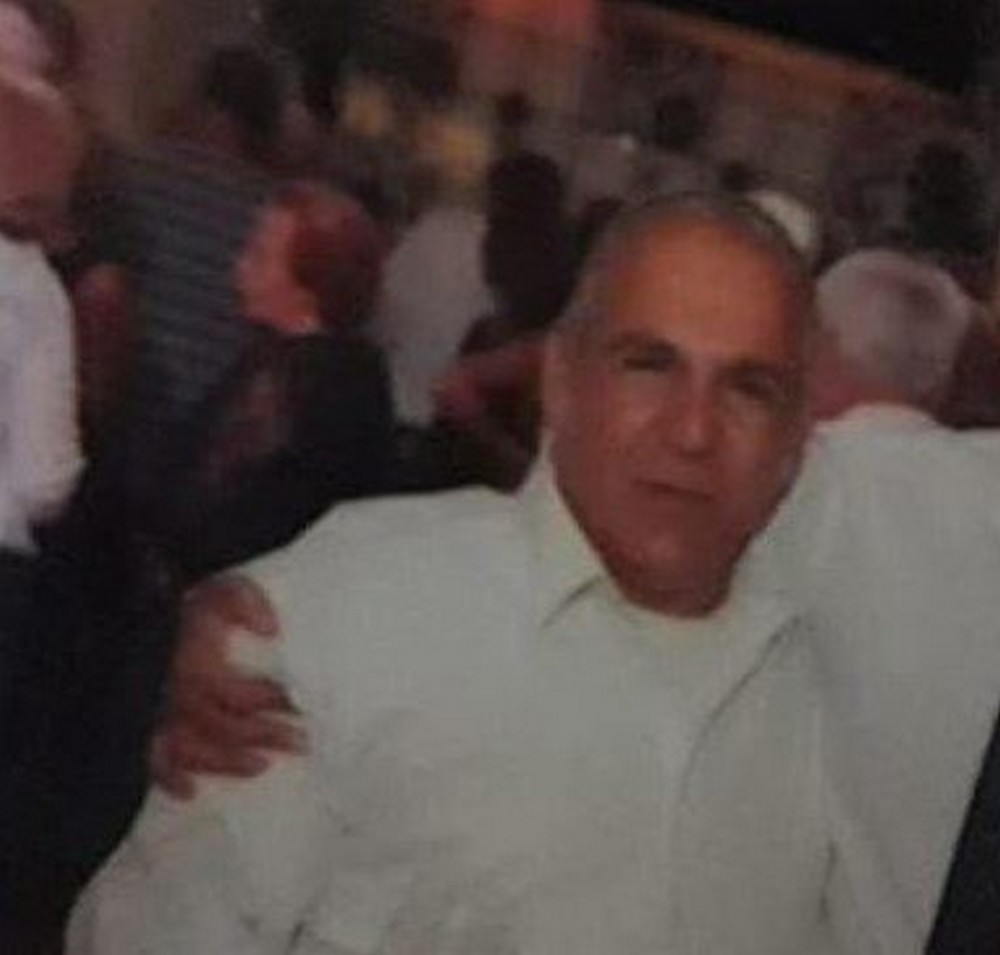 Moshe Agadi, 58, who was killed when a rocket fired from the Gaza Strip scored a direct hit on his home in Ashkelon in southern Israel early on May 5, 2019 (courtesy)

Agadi appeared to be the first Israeli fatality from Gazan rocket attacks since 2014’s war with terrorists based in the Strip. A Palestinian man working in Israel was killed in a rocket strike in Ashkelon in November.

The military said the vast majority of the projectiles fired from Gaza were launched by Hamas, which rules Gaza, and the Palestinian Islamic Jihad, the second-most-powerful terror group in the Strip. A smaller number were fired by other groups in Gaza.

The military said on Sunday that it had conducted some 220 retaliatory raids against targets connected to Hamas and the Iran-backed Islamic Jihad since Saturday and was continuing to do so on Sunday morning.

At least four Palestinian men in their 20s were reported killed in the Israeli strikes, all of whom were said to have been part of rocket launching teams.

Gazan authorities also blamed the deaths of a mother and her baby on Israel, but the IDF denied responsibility and said they were the result of a failed rocket launch.

“Based on our intelligence, we can confirm that they were killed by an accidental use of Hamas weaponry,” IDF spokesman Lt. Col. Jonathan Conricus said Sunday, referring to their deaths as “unfortunate.”

Conricus said it was “likely not the last case” of Palestinians blaming Israel for deaths that were actually caused by Hamas. 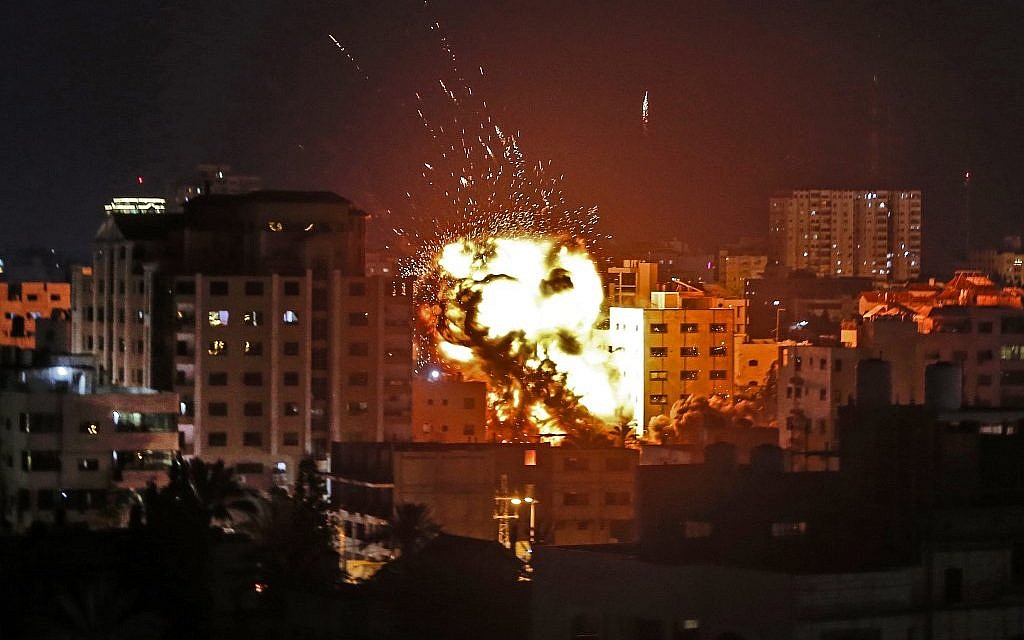 An explosion is seen among buildings during an Israeli airstike on Gaza City in response to rocket fire from the Palestinian enclave on May 4, 2019. (Mahmud Hams / AFP)

On Sunday morning, the military released footage of what it said was its strike on the Hamas underground rocket factory. In the video, the initial bombing can be seen followed by what appear to be secondary explosions caused by the munitions in the facility.

The military said it also bombed several boats belonging to the naval commando units of Hamas and Islamic Jihad. 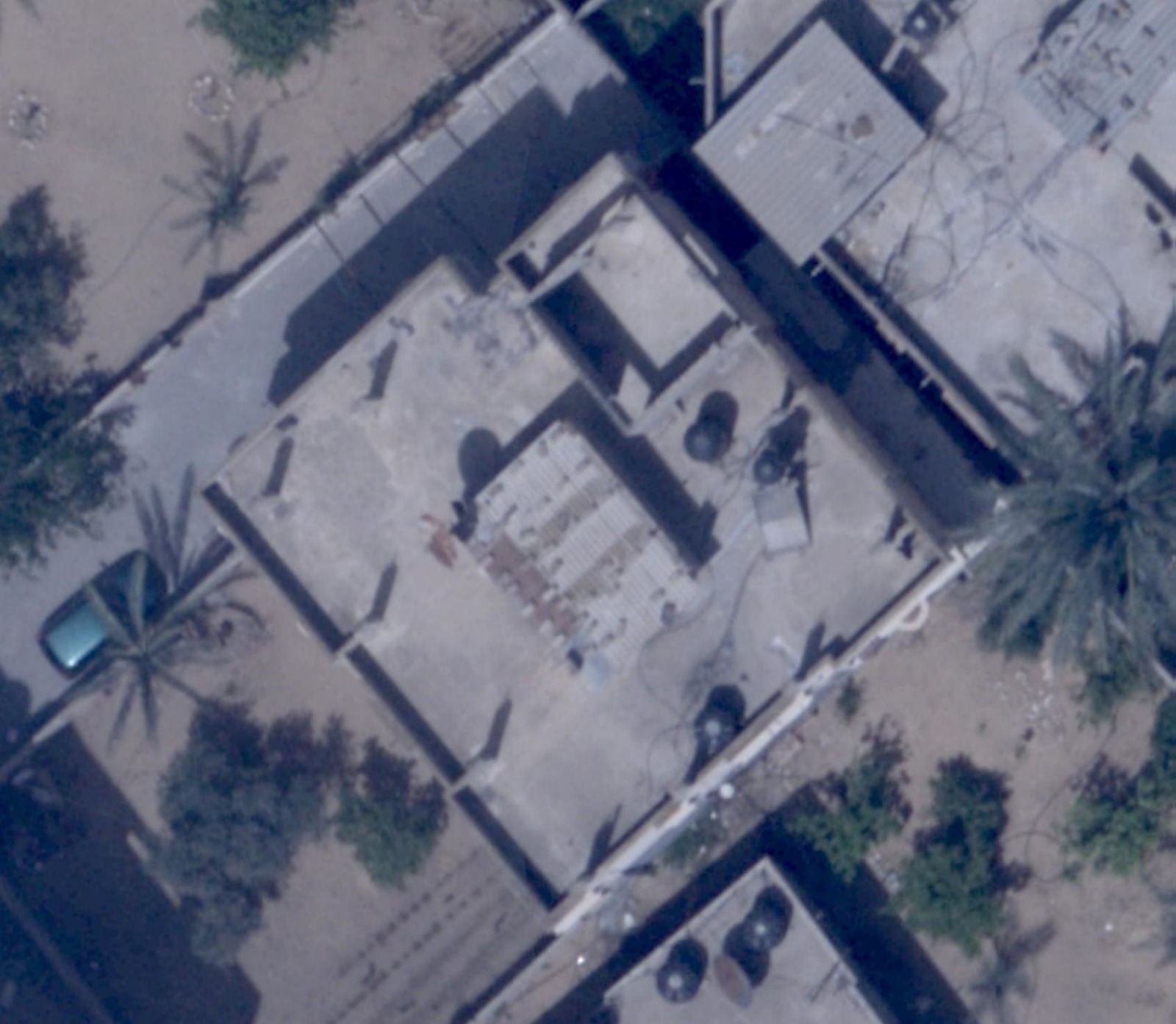 A home in the Gazan city of Rafah belonging to a Hamas leader where the IDF says munitions were stored, which was bombed in response to rocket attacks from the Strip on May 5, 2019. (Israel Defense Forces)

In the strikes, the Israeli Air Force bombed several ostensibly civilian structures, including the homes of terrorist leaders where munitions were being stored in the cities of Khan Yonis, Rafah and the al-Shati refugee camp, as well as a mosque in al-Shati that the IDF says was used as a headquarters by the Islamic Jihad.

The Israeli military also flattened a building housing the offices of the Turkish state-run Anadolu news agency in the Rimal neighborhood of Gaza City, prompting an outcry from Ankara. The IDF said the eight-story building was used by the Hamas and Islamic Jihad to conduct terrorist activities.

Another multi-story building in Rimal, which the IDF said housed Hamas’s military intelligence and domestic security service, was also destroyed in the strikes.

The Israeli army said it was prepared to continue conducting raids if the attacks from Gaza continued. Terror groups in the enclave made similar threats, saying they would attack deeper into Israel if the IDF continued its strikes. 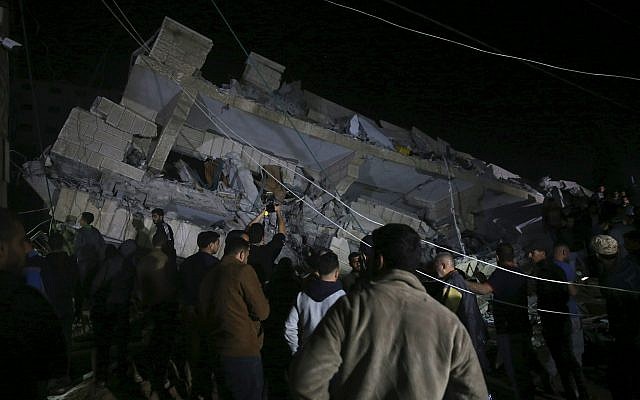 Residents inspect the damage to a building in Gaza City, May 4, 2019. (AP/Adel Hana)

The United States said in a statement it backed Israel’s right to self-defense.

“The United States strongly condemns the ongoing barrage of rocket attacks by Hamas and Palestinian Islamic Jihad from Gaza upon innocent civilians and their communities across Israel. We call on those responsible for the violence to cease this aggression immediately,” State Department spokeswoman Morgan Ortagus said in a statement.

The crossings are used by Palestinian medical patients to enter and exit the territory, and provide the main entry for cargo into the blockaded territory.

Diesel fuel and gasoline were allowed into Gaza through Kerem Shalom on Sunday despite the closure in order to “prevent the civilian-humanitarian deterioration of the Strip,” an Israeli official said, speaking on condition of anonymity. 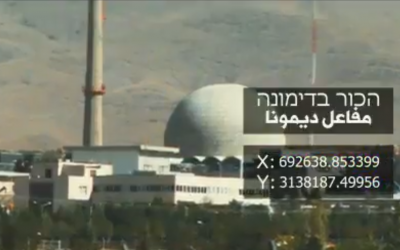 The military wing of the Gaza-based Islamic Jihad terror group releases video threatening rocket attacks on the nuclear reactor in Dimona and other sensitive sites in Israel, May 4 2019 (Screen grab)

Hamas in a statement said it was “prepared to respond to Israel’s crimes” and vowed to stop it from “spilling the blood of our people.” Islamic Jihad threatened to disrupt the upcoming Eurovision Song Contest, due to take place in Tel Aviv May 14-18, as well as issuing a video threatening the Dimona nuclear facility, Ben Gurion Airport and other sensitive sites in Israel.

The UN’s Mideast envoy, Nickolay Mladenov, said the United Nations was working with Egypt to restore calm and called on all sides to “de-escalate” and restore recent understandings.

“Those who seek to destroy them will bear responsibility for a conflict that will have grave consequences for all,” he said in a statement. 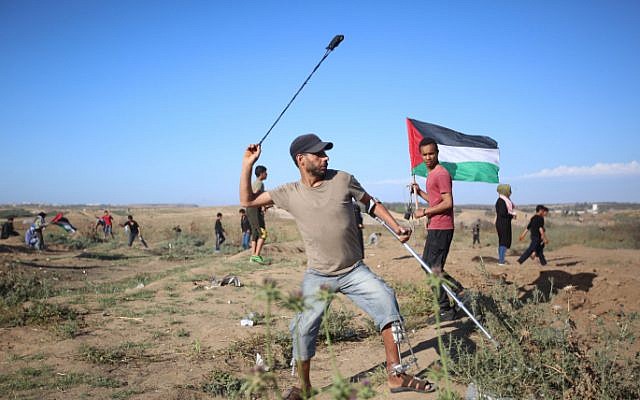 Palestinianss clash with Israeli troops during protests at the Israel-Gaza border, on May 3, 2019 (Hassan Jedi/Flash90)

Following heavy fighting in early April, Israel agreed to ease its blockade on Gaza in exchange for a halt to rocket fire. This included expanding a fishing zone off Gaza’s coast, increasing imports into Gaza and allowing the Gulf state of Qatar to deliver aid to cash-strapped Gaza.

That agreement appeared to be under stress in recent days, with Palestinians launching arson balloons and rockets into Israel and Israeli warplanes striking Hamas targets. Hamas has said the incendiary balloons were a message to Israel not to hold up the transfer of millions of dollars in Qatari aid funds to the cash-strapped Hamas government in Gaza.

Minister Tzachi Hanegbi blamed the delay on Qatar and the United Nations.

On Thursday, a Hamas delegation led by the group’s Gaza chief Yahya Sinwar traveled to Cairo for talks with Egyptian officials on a truce with Israel, Hamas officials said.

Israel and Egypt have maintained a crippling blockade on Gaza since Hamas, which seeks to destroy Israel, seized control of the territory in 2007. Jerusalem says it is necessary to prevent terror groups from rearming and becoming an even greater menace.

The sides are bitter enemies and have fought three wars along with numerous smaller flareups of violence.

Times of Israel staff and agencies contributed to this report.

The Power of the Squat…