The Philadelphia Commission on Human Relations said it’s investigating an event at the Muslim American Society’s Philadelphia chapter last month with Muslim children seen on video speaking in Arabic about beheadings and the liberation of Jerusalem’s most sensitive holy site, The Associated Press reported.

A video uploaded to the chapter’s Facebook page shows children moving to a revolutionary anthem often used by Islamist groups, the AP said, and two girls reading from a prepared text. One says, “We will chop off their heads, and we will liberate the sorrowful and exalted Al-Aqsa Mosque,” the outlet reported.

Among other phrases the children reportedly said: “We will defend the land of divine guidance with our bodies, and we will sacrifice our souls without hesitation,” and “we will lead the army of Allah fulfilling His promise, and we will subject them to eternal torture.” 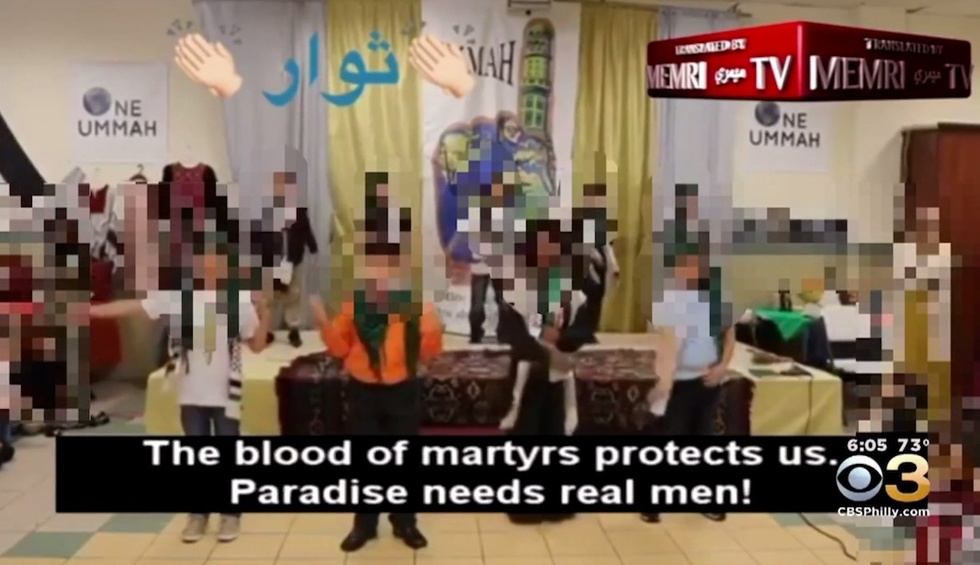 The contested site, revered by Jews as the Temple Mount and by Muslims as the Noble Sanctuary, is at the heart of the Israeli-Palestinian conflict. The compound is the third holiest site in Islam and the holiest site for Jews. It has been a flashpoint of violence in the past.

The Muslim American Society took the video down — calling the video “disturbing” and condemning the words used in it — and said a school that rented space in the building was responsible for the program. It said the person in charge of the event had been dismissed.

The society also called the school, which it did not name, a “separate entity.” But old Facebook posts that have since been taken down show that a school called MAS Leaders Academy operates at the Muslim American Society’s Philadelphia location. Muslim American Society officials did not return phone calls and email messages seeking comment Monday on the relationship between the Philadelphia chapter and the school.

What did the Anti-Defamation League have to say?

The Philadelphia chapter of the Anti-Defamation League called the video “extremely disturbing,” adding that “children should not be indoctrinated to hate. These young people should never have been asked to make speeches and dance and lip-sync to songs that glorify violence against Jews and the state of Israel. The conflict between Israelis and Palestinians is deeply complex and painful on all sides, and the only chance for a peaceful future is to teach our children to pursue peace.”

What else did the Muslim American Society say?

“Unfortunately, the video from the school was uploaded to the chapter’s Facebook page without verifying the content of the video for appropriateness and making sure it conforms to our hate-free policy and values,” according to a weekend statement from the society’s national headquarters, the outlet said. “The chapter will take further steps in assuring strict adherence to publishing and posting policies.”

The Muslim American Society shares space with the Al-Hidaya mosque, which serves many Palestinian immigrants, Jacob Bender, executive director of the Philadelphia chapter of the Council on American-Islamic Relations, told the AP.

Bender — who is Jewish — added to the outlet that the mosque has asked the CAIR chapter to hold a “workshop on diversity and religious tolerance” to help “members of the immigrant Muslim community have a better understanding of Jewish sensitivities and anti-Semitism, so that events like this don’t repeat themselves.”

Bender also told the AP that the April 17 incident “was not an example of radicalization” but rather “a stupid decision by an untrained pedagogue and volunteer teacher.”

What did Philadelphia’s mayor have to say?

“The city of Philadelphia condemns bigotry in all its forms,” Democratic Mayor Jim Kenney said in a statement Monday, the outlet added. “Philadelphia is the City of Brotherly Love and Sisterly Affection. For this moniker to ring true, all our brothers and sisters — regardless of their background — must feel safe and welcome. We are committed to working together with partners representing all our communities to make this happen.”