A student art project showing a pig dressed in a police uniform was removed before the opening of an art show in Madeira, Ohio, after complaints, the Cincinnati Enquirer reported.

The artwork was being displayed in the Madeira Municipal Building, which also houses the police department, WCPO-TV reported — and that sparked outraged calls to the department and threats against the student. 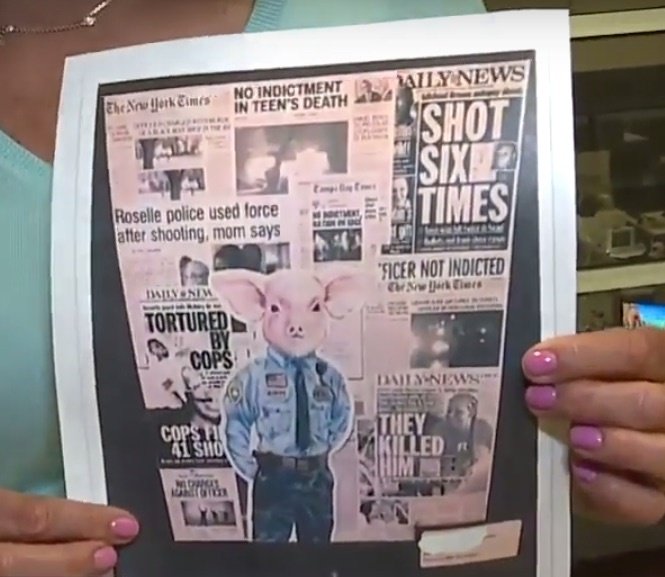 Madeira City Schools gave a group of art students the following assignment: “Take current event articles published in newspapers or magazines on a similar topic and then summarize those articles into a visual representation of the feelings and emotions within the articles selected,” the station said.

The art piece in question was the result of that assignment and was among other art pieces in the municipal building for the annual Madeira Art Show — but the pig-as-cop piece was removed before the May 5 show opening, the Enquirer reported. The school district said the decision was “out of concern for the safety of the student,” WCPO said.

“It was not the intention of the student to evoke such a divisive response,” the district statement added, according to the station.

What was the reaction to the art and to its removal?

“We have the First Amendment for a reason, and sometimes it’s not comfortable to have it, but I would rather protect that freedom of expression than limit what people are saying and try and limit the conversation just because it’s uncomfortable,” Amy Phillips, whose daughter attends Madeira City Schools, told WCPO.

Byron Marks told the station he works in art and found the image “offensive” — but he added that he’s “troubled by the number of unarmed Americans who’ve been shot by police in the past year or so.”

Kellie Gantzer Williams shared an image of the art piece on Facebook and offered the following observation: “I support free speech and pouring your feelings into artwork. But this goes way beyond that, it promotes hatred and divisiveness. I just can’t believe this is hanging in a municipal building.”

The district superintendent wrote the following to Williams:

Police officers and those in law enforcement deserve and demand our respect as they serve to protect our communities. Particularly in our Madeira community, our officers under the leadership of Madeira Police Chief Schaefer go out of their way to support our schools. I have spoken with Chief Schaefer this morning to apologize as it would not have been my choice to have this artwork displayed. I’ve spent the last several hours looking into the “how” or “why” this piece made it into the art show. For everyone’s benefit, until those questions are answered, the organizers of the art fair took the artwork down prior to the show this morning. I thanked them and will continue to work through this situation.

While this piece of “art” may have been created by a student in our school district, I can assure you that it does not represent my views or the overwhelming majority of our student body or staff.

What did police have to say?

The Madeira Police Department told WCPO it got complaints about the art piece but didn’t say if it had requested its removal.

“The members of the Madeira Police Department fully respect and support the student’s right to free speech and recognize that this young artist is very talented,” the department’s statement reads, the station said. “However, officers are troubled by the perceived message of the student’s art project.”

Lt. Dan Hils, president of the local police union, told WCPO he was saddened by the piece but wouldn’t have asked for its removal.

“For me, the word I think of is just a little disappointed,” Hils added to the station. “Disappointed that there is youth that believe that of police officers … It’s a beautiful thing our country has — the ability for people to express how they feel — and this young person was expressing how they feel. I feel they were wrong.”


Should this Madeira student art project have been taken out of show?

Las Vegas Raiders mandate vaccines for home games, offer to jab fans in the parking lot before games — then they can enter with masks