President Donald Trump is warning Iran, saying that if Tehran does “anything” in the form of an attack “they will suffer greatly.”
AP

LONDON – The United States is playing a “very dangerous game” as it attempts to “drag Iran into an unnecessary war,” a senior Iranian official said Tuesday.

Hamid Baeidinejad, Iran’s ambassador to the United Kingdom, told reporters here that the Trump administration’s deployment of an aircraft carrier strike group, B-52 bombers and other military personnel and equipment to the Persian Gulf to counter alleged, unspecified Iranian threats risked “serious miscalculation.”

Baeidinejad denied that Iran or its “proxies” were behind what Washington has described as the possible Iranian-backed “sabotage” of oil tankers in the Gulf belonging to Saudi Arabia, Norway and the United Arab Emirates. On Tuesday, Saudi Arabia said that drones also attacked one of its oil pipelines and other energy infrastructure, an incident that caused global oil benchmarks to jump.

“We are prepared for any eventuality, this I can tell you,” Baeidinejad said, amid growing tensions between the U.S. and Iran that have appeared to bring the two longstanding foes to the brink of war. The two countries have no formal diplomatic channel of communication, contributing to fears war could be started by accident.

Baeidinejadsaid said from the Iranian perspective it appeared that some of President Donald Trump’s closest advisers such as National Security Adviser John Bolton were actively “trying to convince” Trump to start a military confrontation that neither country wants and would be “devastating” for both Iran, the U.S. and the region.

‘They’re not going to be happy‘: Trump threatens Iran over reports of ‘sabotage‘ 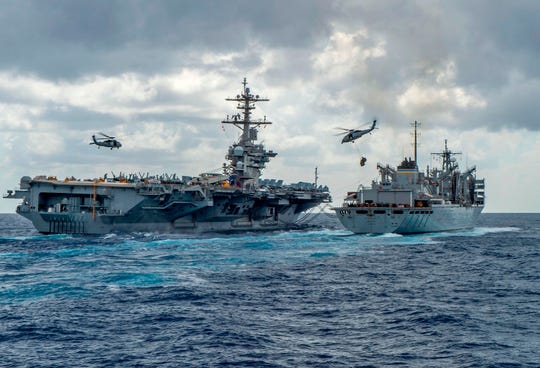 Baeidinejad’s comments came as Acting U.S. Defense Secretary Patrick Shanahan reportedly presented a military plan at a meeting of top national security officials that would send as many as 120,000 U.S. troops to the Middle East in the event Iran strikes U.S. forces in the region or speeds up its development of nuclear weapons, according to a report published in The New York Times on Monday. The plan was partly ordered by Bolton, the report said. It does not call for a land invasion of Iran.

Since last week the Trump administration has been insisting that is has “specific and credible” intelligence indicating Iran or its regional supporters may be preparing attacks against American forces or targets in the region. “It’s going to be a bad problem for Iran if something happens,” Trump said Monday outside the White House.

However, the details of that intelligence remain murky and potentially wrapped up in what seasoned Iran-watchers and security experts believe may be part of attempts by  Trump administration hawks to find a pretext for a military conflict with Iran following the president’s decision to withdraw from the 2015 landmark nuclear deal between Iran and world powers. The accord was viewed by former President Barack Obama as one his signature foreign policy accomplishments and Trump campaigned on abolishing it.

“As we read of Bolton’s plan to send 120,000 U.S. troops to go to with Iran, we should remind ourselves that this is a TOTALLY UNNECESSARY CRISIS!” wrote Trita Parsi, the founder of the National Iranian American Council, on Twitter.

“We’re only here cuz Trump quit the deal and put Bolton in charge of Iran policy,” he said. The NIAC seeks improved relations between Washington and Tehran.

“This is politics, and this is about Bolton and others who have had a bee in their bonnet about Iran for as long as they have been in politics,” said Robert Muggah, a specialist in international security and co-founder of The SecDev Group, an Ottawa, Canada-headquartered consultancy that analyses open-source intelligence.

Trump has pursued a policy of “maximum pressure” on Iran, a strategy that has seen the U.S. slap the Middle East country with a series of increasingly onerous economic sanctions. Last week, Tehran announced that it was abandoning two of its nuclear-deal-related obligations: exporting excess uranium and “heavy water” used in nuclear reactors. The Trump administration characterized this move as an attempt by Iran to hold the U.S. “hostage” and an example of “nuclear blackmail.” However, it was a direct response to the U.S. ending exemption from nations that purchase these stockpiles.

“The (nuclear deal) is becoming meaningless because of the U.S.,” Baeidinejad said.