Amid the United Kingdoms efforts to
stem the tide of knife attacks — some of which has resulted in widespread mockery — one police department is getting hammered for a Twitter photo.

In a Tuesday post, the Regents Park Police force said it “conducted weapons sweeps, dealt with a person injured from a van reversing on them, reported a burglary, and collected all these from @scope
charity shop who diligently didn’t want them to get into the wrong hands & disposed of correctly & safely.”

No, your eyes don’t deceive you. Among the objects in the photo is a spoon — and that fired up the ire of journalist Tim Pool, who mercilessly called out police: 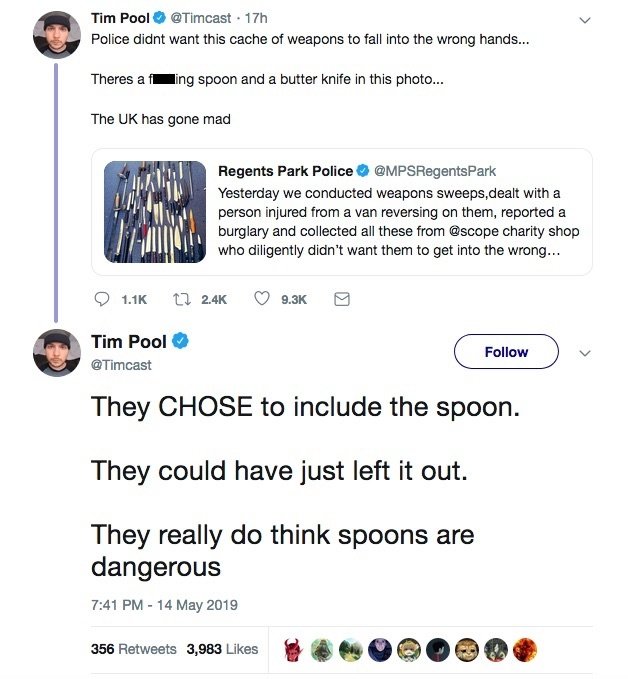 “Police didn’t want this cache of weapons to fall into the wrong hands … There’s a f***ing spoon and a butter knife in this photo … The UK has gone mad,” he wrote, adding that the cops “CHOSE to include the spoon. They could have just left it out. They really do think spoons are dangerous.”

It’s not exactly clear which object is a butter knife, but the spoon is there for all to see.

As you might expect, the police force’s ratioed post — with comments far exceeding likes — attracted reactions that were arguably even funnier than the spoon in the photo:

Authorities charge 2 teens as adults after group was found to be plotting a mass killing on Columbine anniversary: report

88-year-old professor resigns mid-class after student refuses to wear a mask: I 'risked my life to defend my country in the Air Force' — not willing to risk my life to teach unmasked students