ISOLATED Theresa May was last night holed up in No10 amid an extraordinary Cabinet bid to force her from power.

Brexiteer Commons Leader Andrea Leadsom quit over the PM’s bid to offer MPs the chance of a second EU referendum.

And seven other Cabinet ministers also told No10 they will not back Mrs May — a clear signal for her to step down.

But the PM refused to budge, with aides saying: “She is going nowhere until she gets Brexit done.”

Mrs May even refused a series of ministers’ demands for face-to-face talks, scrapping an appointment with Scottish Secretary David Mundell with ten minutes’ notice.

Former Tory leader Iain Duncan Smith last night joked that Mrs May was virtually barricading herself in at Downing Street — saying: “The sofa is up against the door, she’s not leaving.”

Cabinet rebels are furious at Mrs May for saying the Government will legislate for a second referendum, insisting they agreed only to offer the Commons a vote on it.

One minister said: “It’s not just her intention of legis­lating for a second refer­endum. It’s also become a clear reality the PM is no longer getting a hearing, so someone else now needs to do it.”

Mrs May’s bleary-eyed look was reminiscent of ex-PM Margaret Thatcher’ tears after she quit in 1990.

After her resignation, Leadsom delivered a withering personal attack on Theresa May — accusing her of blowing Brexit and calling on her to quit “in the interests of the country”.

The PM’s ex-leadership rival reignited their long-running feud with a devastating letter to Mrs May while resigning as Leader of the Commons.

In it she  came close to hinting Mrs May had lied to the Cabinet by failing to consult ministers, which saw a  second referendum plan passed without their say-so.

It also emerged that  76 Tory MPs — a quarter of her party — are now vowing to vote down her deal.

He will tell her she must name her departure date by the end of the day — or face being forced out by his powerful 1922 executive committee within days.

The 18-strong group, which governs party leadership rules, yesterday decided to give Mrs May 48 hours to leave No10 with “dignity”.

Members had held a secret ballot on whether to change Tory rules to hold a fresh no confidence vote in her leadership, with their votes sealed in envelopes.

If she does not stand down, the envelopes will be opened by Sir Graham. One 1922 executive said last night there was “a clear majority” in the room for a rule change.

The senior MP added: “Theresa will have to go on Friday, whatever happens now.”

Former  minister Tim Loughton was among Tory MPs who sent new letters to Sir Graham  calling for her to go.

He  even tweeted a photo of the addressed envelope, with the words: “Enough said.”

On another day of high drama in Westminster;

Mrs Leadsom quit last night with a devastating attack on the Prime Minister’s latest Brexit climbdown and her  handling of Cabinet tensions.

But it was just the boiling over of the simmering antagonism between the pair.

Mrs Leadsom, a former banker and married mum of three, had been a prominent Leave supporter in the referendum campaign. She stood against Remain-backing Mrs May after David Cameron resigned as PM in 2016.

The women made it to the final two but then Mrs Leadsom gave a disastrous interview in which she appeared to suggest she was a better choice for PM because she had children.

She claimed this meant she had  a “stake in the future” by contrast with Mrs May who cannot have children for health reasons.

She withdrew from the contest soon after the controversy  and so cleared the path for Mrs May to enter Downing Street.

The new Prime Minister appointed Mrs Leadsom as her Environment Secretary only to  demote her to Commons Leader in a reshuffle after the disastrous 2017 General Election.

Afterwards Mrs Leadsom did not quit the Cabinet but is believed to have been unpopular in No 10 for her hardline stance.  Last month she made more waves by claiming that No Deal  would not be “nearly as grim as many would advocate”.

Mrs Leadsom has also repeatedly clashed with Commons Speaker John Bercow. Last year she confronted him over claims he called her a “stupid woman”.

But, as Commons Leader, Mrs Leadsom has also been central  in tackling the “Pestminster” culture of sexual harassment and bullying.

In 2017, Defence Secretary Sir Michael Fallon was forced to quit  after she accused him of making lewd comments to her.

​Theresa May delivers her ten point Brexit plan to the Commons​

Seven other  Cabinet ministers also told No10 they won’t back Mrs May’s high stakes final Brexit gamble — a clear signal for her to step down.

It would be her  second tilt at the top job following her controversial bid in 2016 when she was forced to withdraw after appearing to suggest she was a better choice for the PM because she had children.

In her resignation letter, Mrs Leadsom  said the PM’s plans would fail to “deliver on the referendum result”.

She acknowledged that leaving on the eve of today’s European elections was damaging but  she insisted she had to quit as  she was “fundamentally opposed” to the Withdrawal Agreement Bill, which she was due to unveil to MPs today.

He said Theresa May should  put a firm proposal for a “public vote” in  legislation.

He spoke as Labour peer  and former  EastEnders actor  Michael Cashman, 68, quit the party and said he would vote for the Lib Dems in today’s European elections.

‘URGE YOU TO MAKE THE RIGHT DECISIONS’

Hinting that the PM had lied to the Cabinet after her second referendum plan passed without their  say-so, she wrote: “There has been such a breakdown of Government processes that recent Brexit-related legislative proposals have not been properly scrutinised or approved by Cabinet.”

And in a call for Mrs May to stand down in the national interest, Mrs Leadsom finished her letter by saying: “I fully respect the integrity, resolution and determination that you have shown during your time as Prime Minister.

“No one has wanted you to succeed more than I have, but I do now urge you to make the right decisions in the interests of the country, this Government and  our party.”

Senior No10 staff were given no warning about Mrs Leadsom’s departure, and she  rang the PM to inform her of the decision only 30 minutes before making it public shortly before 8pm last night. Downing Street issued only a curt response, with a spokesman saying Mrs Leadsom had served “with distinction and great ability”.

Mrs May said she was “sorry” Mrs Leadsom was off, praising her “passion, drive and sincerity”.

THOSE who predicted Theresa May would be a poor Prime Minister have regrettably been vindicated.

In fairness, her task has been harder than any predecessor’s since Winston Churchill. It became all but impossible after she blew her majority in 2017.

Even so, Mrs May and her woeful Cabinet of mainly third-rate friends have failed on Brexit and the social justice mission she initially championed. Andrea Leadsom cannot bear to be a part of it any longer.

All PMs want a “legacy”. It can be the only reason Mrs May has clung on so long.

And though she will leave office with none to speak of, she can at least retain her dignity in defeat.

Even that is ebbing way.

She said she was “grateful for the support  given over the last three years” in working to deliver Brexit.

But the PM said she believed Mrs Leadsom was wrong to argue that the deal negotiated with the EU meant the UK “will not become a sovereign country”.

In a further sign of the PM’s support slipping away, eight junior ministers led by Nadhim Zahawi pleaded for a meeting with her after deciding they couldn’t support the Withdrawal Agreement Bill due to the second referendum pledge.

They were snubbed after putting their request to Chief Whip  Julian Smith.

Mr Zahawi told The Sun: “We decided we had to act.

“It’s a matter of credibility now. We’ve been arguing all along that a second referendum would lead to more uncertainty and division. We just cannot offer one.”

In a statement after the 1922 Committee meeting, Sir Graham said he would meet the PM tomorrow and then consult with the 1922 executive. Tory MPs were told  of tomorrow’s meeting last night.

It came amid a growing rebellion of Tory MPs to Mrs May’s “new” Brexit deal, which she outlined on Tuesday.

The number opposed to the deal has more than doubled since the speech, which promised MPs a vote on a second referendum and customs union.

Crucially it means Mrs May must now win over more than 70 Labour MPs to have any chance of getting her deal through the Commons.

The PM even lost several loyal Tory MPs who have voted for the deal on all three previous occasions — including Martin Vickers, Robert Halfon and Geoffrey Clifton-Brown. Despite scores of MPs coming out against the deal, Mrs May pushed ahead with a Commons statement pleading with them to support her faltering plans.

She said that another rejection would plunge Britain back into yet more “division and deadlock”.

And unveiling her deal to the Commons, she insisted the Government would “make provisions” for a second referendum if MPs voted for one.

Furious People’s Vote backers said the commitment didn’t go far enough for them to back her Brexit bill.

ANGER AS PM SHUNS NO DEAL 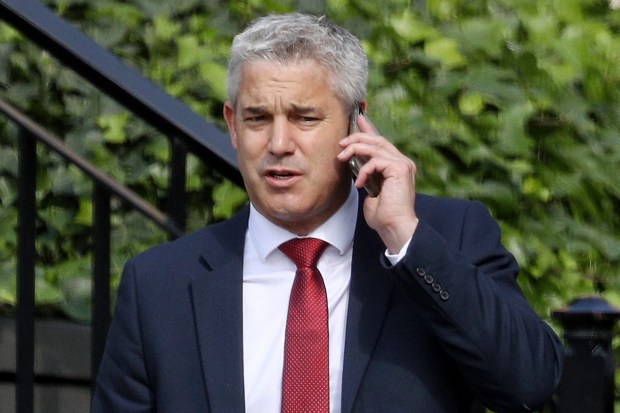 THERESA May incensed Brexit-backing Ministers by killing off a Cabinet No Deal debate despite calls for a “step change” in preparation, we can reveal.

He said  a “cliff-edge” exit on October 31 would be “far worse” for business than March 29 and warned of pre-Christmas warehousing shortages.

But the PM stunned Brexiteers in Tuesday’s Cabinet by postponing a vote on No Deal work until after the half term break. Yesterday, she claimed a No Deal could threaten the Union’s future and leave Britain more vulnerable to terrorists.

She said the UK’s security relationships with the EU27 was “fundamental” to keeping the country safe, yet leaving with no deal would close them off.