Trump has built less than 2 miles of new wall with $1.57 BILLION Congress handed him for this year but insists ‘demolition and rebuilding’ should count too

The Trump administration has built less than 2 miles of new border barriers using the $1.57 billion Congress allocated to the project for the fiscal year that will end September 30, according to a letter filed Tuesday in federal court.

House of Representatives general counsel Douglas Letter made that revelation to Judge Haywood Gillam, citing information the administration provided to Congress about its efforts through the end of April.

‘Based on that updated information, it appears that CBP has now constructed 1.7 miles of fencing with its fiscal year 2018 funding,’ Letter wrote.

President Donald Trump fired back Wednesday on Twitter, defending what he said has been ‘a complete demolition and rebuilding of old and worthless barriers with a brand new Wall and footings.’

‘Problem is, the Haters say that is not a new Wall, but rather a renovation. Wrong, and we must build where most needed,’ he added. 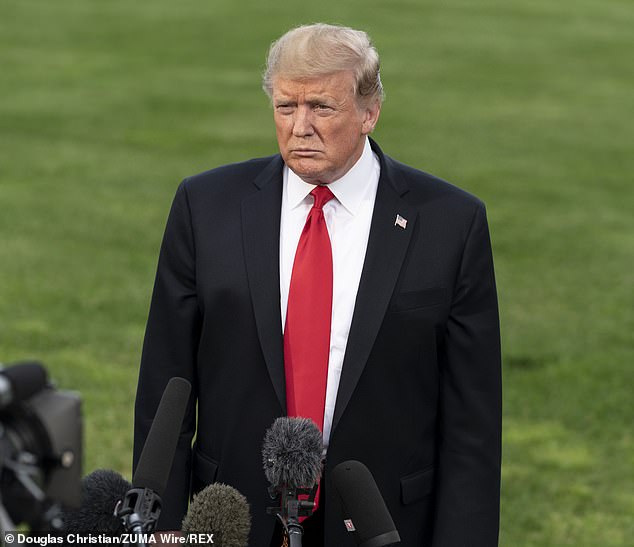 President Donald Trump played defense on Wednesday after a lawyer for Congress told a federal judge that his administration has made little progress building a border wall despite getting $1.57 billion in funding for it this year 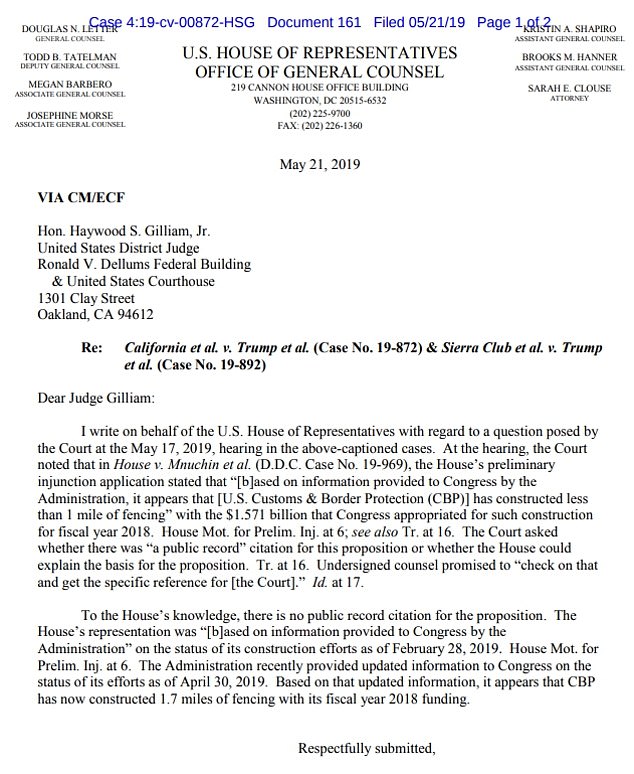 On Tuesday the House of Representatives’ general counsel told a judge that U.S. Customs and Border Patrol ‘has now constructed 1.7 miles of fencing’ with the $1.57 billion it received for the project in the fiscal year that ends September 30 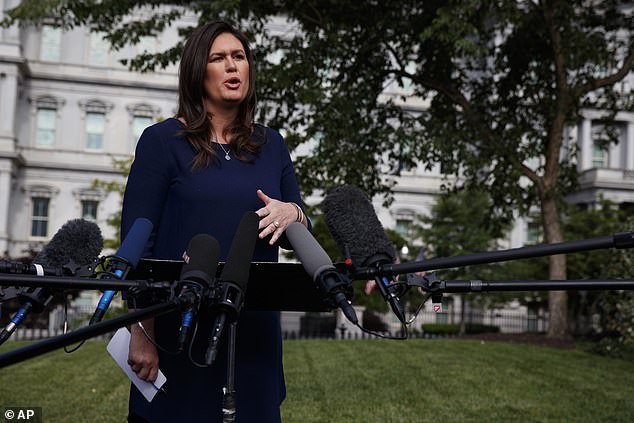 ‘Also, tremendous work is being done on pure renovation – fixing existing Walls that are in bad condition and ineffective, and bringing them to a very high standard!’ Trump concluded.

A U.S. Customs and Border Protection spokesman told DailyMail.com in March that it had not erected any walls at all to protect previously unbarricaded sections of America’s southern border.

‘The first new wall project, where no barrier currently exists, is anticipated to start in April,’ CBP spokesman Roger Maier said at the time. He identified Hidalgo County as the construction project’s location, a border zone along a meandering 50-mile stretch of the Rio Grande.

CBP said last year that it was ‘designing and constructing approximately 25 miles of levee wall system’ in that county, whose anchor is the the border city of McAllen.

Maier did not immediately respond to a question on Wednesday about whether the Hidalgo County project has proceeded.

CBP wrote in March, after DailyMail.com reported Maier’s comments, that it had ‘built 38 miles of new border wall system in CA NM & TX—providing new capability by replacing ineffective infrastructure, like Normandy-style barriers designed only to stop vehicles, not people on foot.’ 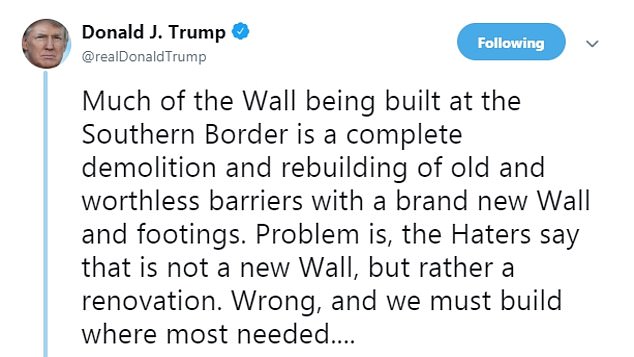 Trump blasted the ‘haters’ who point to a lack of action at the border, claiming that he should get credit for ‘demolition and rebuilding’ of ineffective border barriers

Trump said Monday night during a rally in Pennsylvania that ‘the wall is being built as we speak.’

‘We’ll have almost 500 miles of wall by the end of next year,’ he boasted, inviting an audience member on stage who was wearing a suit made of brick wall-print fabric.

White House Press Secretary Sarah Sanders upper the ante Wednesday morning, saying the administration will hit that landmark by the end of 2019 and that Letter cited ‘an incorrect number.’

‘We feel comfortable and confident that we’re on track to get right around 500 finished by the end of the year,’ Sanders insisted.

Letter’s letter doesn’t address the possibility that the Trump administration has used money for wall-building other than the funds Congress appropriated for this year.

The president has rediirected billions of dollars to the project through a national emergency declaration, while claiming at the same time that the project has long been underway.

Both houses of Congress voted to rescind that declaration with a resolution that the president vetoed in March. 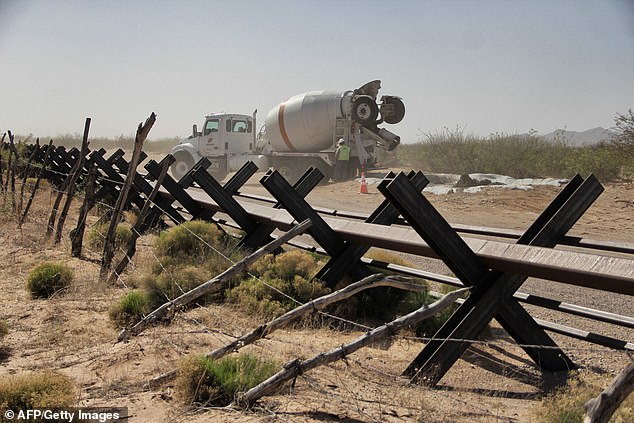 Customs and Border Protection says it has replaced ‘dilapidated’ border barriers that consisted of Normandy-style vehicle barriers like these, shown in April 2018 between Santa Teresa, New Mexico and Ciudad Juarez, Mexico

The administration has awarded contracts for just 244 miles of barriers so far, and more than half of the money required to pay for those projects is earmarked from emergency-declaration funds that court battles have, at least temporarily, put out of reach.

Of those 244 miles’ worth of contracted walls, 230 would be replacements to barriers that existed when Trump became president in January 2017.

Judge Gillam presides over two separate lawsuits aimed at stopping Trump from using emergency-declaration money to fund construction that Congress has refused to pay for.

California and 19 other states brought one suit. Plaintiffs in the other include the Sierra Club and the American Civil Liberties Union.

Trump has boasted in the past that ‘[w]e have already built large new sections’ during his time in the White House.

But border barriers erected between the U.S. and Mexico since Inauguration Day 2017 have consisted almost exclusively of supplements to existing walls and replacements for outmoded or decreipt barriers.

Maier said in March that CBP had ‘constructed approximately 38 of 40 miles of wall in place of outdated designs,’ using funds Congress appropriated for fiscal 2017.

Those replacements are up in San Diego and El Centro, California; Santa Teresa, New Mexico; and El Paso, Texas.

‘This barrier replaced dilapidated infrastructure, half of which was Normandy-style vehicle barrier,’ he said.

GOLDMAN: These 4 cities will suffer ’08 crash in home values…