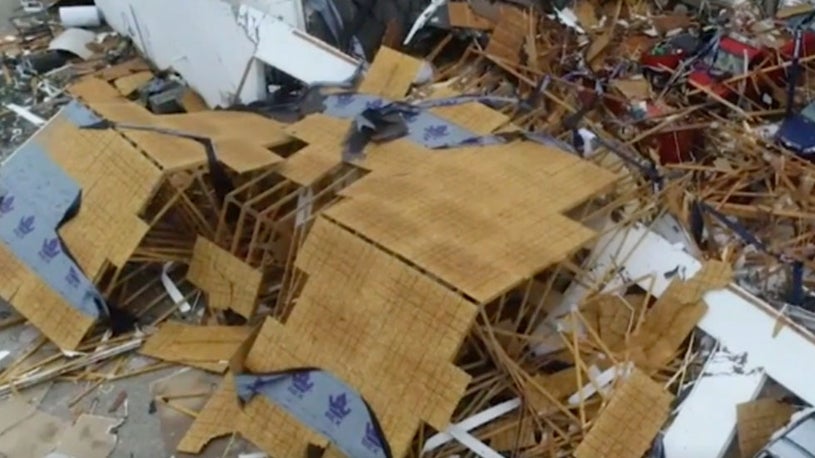 “It’s just a war zone,” Eric Cunningham told CNN. “There’s a school up on the hill that has major roof damage. Power lines snapped in half. Light poles snapped at the base; just tossed like toys. … Trees were just completely stripped. It doesn’t even look like they had any leaves or bark on them. They are just stripped clean. … Streets were completely blocked with bricks and trees and power lines being down. Really bad. Really a war zone right now.”

Drone video showed roofs ripped off several large buildings in an apartment complex just off Ellis Boulevard at Highway 54. Bedrooms and living rooms were open to the rain that was beginning to fall about 8:45 a.m. CDT Thursday. In other buildings, only piles of lumber and chunks of broken drywall remained.

No deaths have been reported in Jefferson City, but the tornado was part of a multi-day severe weather outbreak in the Plains and Midwest that has killed at least eight people and caused extensive flooding.

Three of those deaths occurred Wednesday evening when a tornado struck near Golden City, Missouri, about 30 miles northeast of Joplin, according to the Missouri Department of Public Safety.

Kenneth Harris, 86, and his wife, 83-year-old Opal Harris, were found dead about 200 yards from their home, the Missouri State Highway Patrol said, according to KOLR. Betty Berg, 56, also was killed in the storm and her husband, Mark Berg, 56, suffered serious injuries, KOLR reported.

The damage spanned about a 3-square-mile area in the city of 43,000, Jefferson City Police Lt. David Williams said. About 20 people were rescued by emergency personnel, and although there were no reports of missing people, authorities planned to make door-to-door checks on Thursday, he said.

“It’s a chaotic situation right now,” Williams said. “We need people who are not affected to stay out of those areas.”

Williams spoke from the Cole County Sheriff’s Office, where debris such as insulation, roofing shingles and metal pieces lay on the ground outside the front doors.

Nineteen people have been treated at Jefferson City hospitals. Jessica Royston, a spokeswoman for SSM St. Mary’s Hospital, said seven people with minor injuries were treated there. About 12 people suffering minor to moderate injuries such as cuts and bruises were treated at Capital Regional Medical Center. Spokeswoman Lindsay Huhman says only one person was admitted.

Danny Clayton was one of 75 guests at the Best Western Hotel in Jefferson City. He woke up when the power went out and the sirens were already blaring.

“It wasn’t but a few seconds later and the whole building started trembling and shaking,” Clayton said in an interview with meteorologist Mike Seidel of The Weather Channel. “It just felt like an earthquake.”

“I was a straight rumble. If you can just imagine putting your head in a box and just trembling and shaking as fast as possible … it was just violent.”

A tractor-trailer truck was blown over outside his room, and he said two people were taken to the hospital with cuts from broken glass.

“It was very fast. Once it settled down I was able to get out of my room and there was glass everywhere, people screaming. You see blood in the hallways from the ladies that got cut. Just a lot of confusion, you know. But they were able to get the ambulances here soon enough and they got them out of here.”

He said it was a “surreal feeling when you experience something like that and you come out of it OK.”

Kyla Foster, another guest at the Best Western, was woken by sounds in the hallway.

Then she heard the sirens.

“I scrambled to get dressed,” Foster told The Weather Channel.

“I ran for the door and there was a woman screaming outside, women screaming, outside the door and I was afraid to open the door because I didn’t know if the tornado was on the other side or what was there. So I turned around and I ran into the bathroom, into the bathtub, until the screaming stopped. Then I went to the door and opened it up and just saw total chaos, total mess.”

Her car was pushed across the parking lot by the semi and totaled. Foster is from California and said she is used to earthquakes, but had never experienced a tornado before.

“The rumbling, the roaring, the screaming is what’s going to last for a while.”

Austin Thomson, 25, was doing laundry at his apartment complex when the tornado struck, according to the Associated Press. He watched a flagpole bend and then slam to the ground. Windows broke and he dove behind the washers and dryers.

After it calmed down, he walked outside to check the damage.

A spokeswoman for Jefferson City Public Schools told KMIZ that several school buildings had damage to their roofs because of the tornado.

A weather spotter reported some homes had collapsed and trees were stripped.

All non-essential state employees in Jefferson City were told not to report to work Thursday. Damage was reported to some state buildings, according to the Missouri Department of Public Safety.

Debris from the “wedge” tornado was lofted up to 13,000 feet, according to radar estimates, and may have been falling out northeast of the city. A tornado warning was first issued for Cole County, of which Jefferson City is the county seat, at 11:08 p.m., roughly 35 minutes before the tornado hit the city.

About 25 miles southwest of Jefferson City, two buildings were badly damaged at the Eldon Manor Apartments in Eldon, Missouri, and a retirement home was evacuated, KY3 reported. Only minor injuries were reported.

To compound matters, the Missouri River was expected to crest in Jefferson City on Friday at its highest level, there, in 24 years, about 9.5 feet above flood stage, levels expected to flood some city streets downtown

The tornado was just one of a swarm of tornadoes which struck Wednesday and Wednesday night in a band from eastern Oklahoma into Missouri and Illinois. Over 30 reports of tornadoes had been received by the National Weather Service, though the exact number of tornadoes had yet to be determined.

In addition to three tornado deaths Wednesday in Golden City, Missouri, five deaths were confirmed on Tuesday. They included two woman who drove around barricades on flooded streets in Oklahoma; a 74-year-old woman who died as a result of her home being hit by a reported tornado in Adair, Iowa; and two deaths attributed to a car accident in heavy rain near Springfield, Missouri.

Another destructive tornado struck just north of Joplin, Missouri, on the eight-year anniversary of the devastating EF5 tornado of 2011, producing structural damage in Golden City, west of Dudenville and in Carl Junction, Missouri.

The line of storms also caused damage across parts of Illinois and Indiana overnight.

A tree fell onto a home in Ashland, Illinois, just before midnight. Trees were uprooted and power poles snapped. Trees were also down in Cisco, Illinois.

A possible tornado blew a tractor-trailer off of Interstate 74 near Fithian, Illinois, about 2 a.m., the National Weather Service said. Trees were down in Danville, and at least two homes were damaged.

A grain bin blew over north of Oxford, Indiana, about 2:30 a.m. Tree limbs were broken in Rolling Hills, Indiana.

Information from the Associated Press was used in this report.