‘It was a direct hit’: Monster tornado tears through Jefferson City in Missouri causing ‘catastrophic damage’ and a ‘mass casualty event’ as twisters across the state kill three and the National Guard is called in

By Valerie Edwards For Dailymail.com

A catastrophic tornado has ripped through Missouri’s capital, according to the National Weather Service.

The ‘violent tornado’ was confirmed in Jefferson City around 11.43pm Wednesday night. Jefferson City took a direct hit by the storm and there are several unconfirmed reports of residents hearing ‘mass casualties’ over their scanners.

Three deaths in Missouri have been confirmed, the result of a tornado earlier in the day, but there is no word yet on possible fatalities in the capital.

Police Lt. David Williams said officers have received multiple calls of people being trapped in their homes and 20 people have been rescued by emergency workers in Jefferson City.

An emergency alert described the tornado as ‘large and destructive’ and moving at 40mph. The NWS of Saint Louis said on Facebook that the tornado has ‘produced extensive damage’.

Some residents are also trapped under rubble in the Hawthorne Apartment complex that suffered damage to more than half of its building.

Firefighters have begun rescue operations in the area, including at the apartment building. Missouri Task Force 1 was also activated. 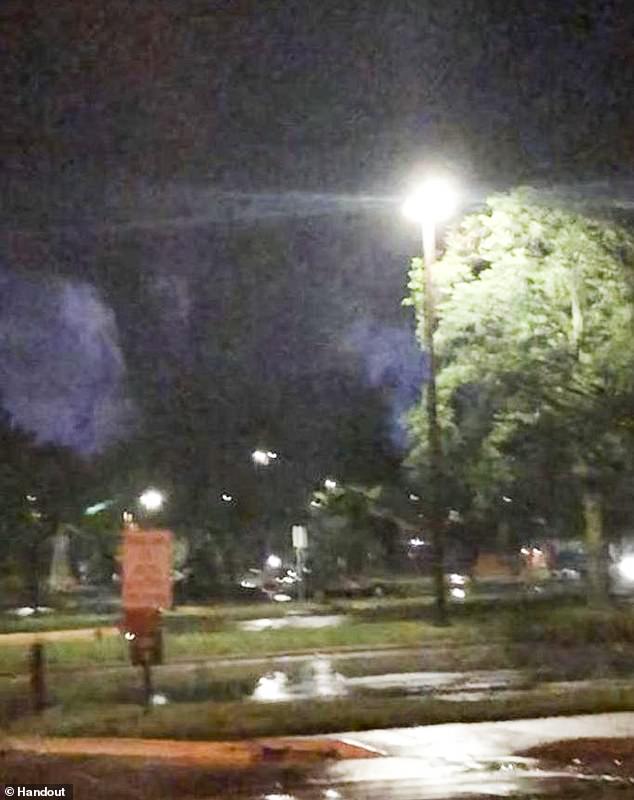 A catastrophic tornado has ripped through Missouri’s capital, according to the National Weather Service. The ‘violent tornado’ was confirmed in Jefferson City around 11.47pm Wednesday night 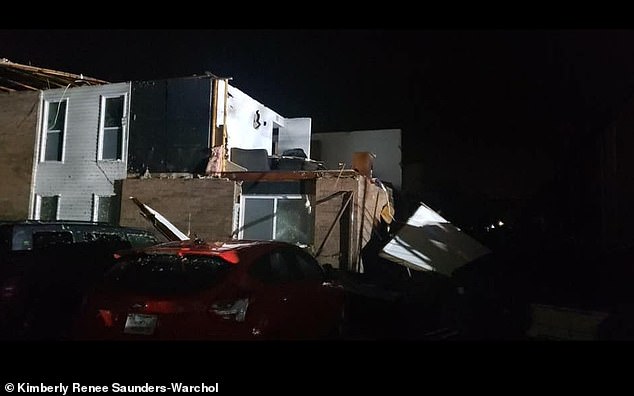 Multiple injuries were also reported, but no fatalities. Some residents are also trapped under rubble in an apartment complex (pictured) that suffered damage to more than half of its building 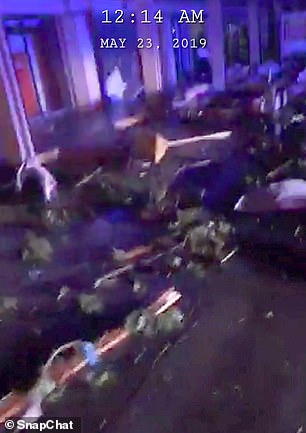 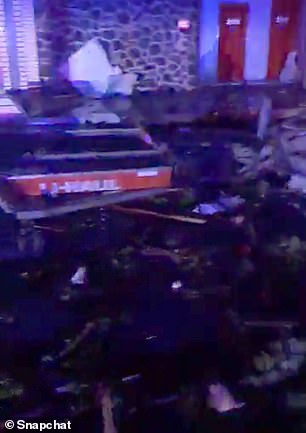 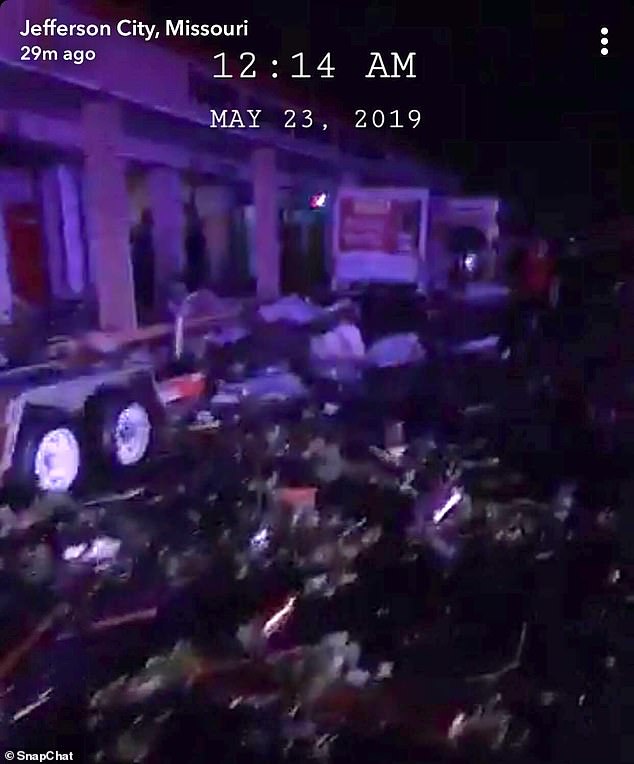 Late Wednesday night, the weather service warned residents in a tweet to take ‘shelter now!’ An emergency alert described the tornado as ‘large an destructive’ and moving at 40mph

Firefighters aren’t able to reach the complex due to the collapse of a YMCA building that’s blocking the road.

There are also multiple reports on social media of a Best Western hotel that got hit by the tornado with injuries inside.

‘Consider all power lines live. Stay out of areas with damage,’ officials warned, adding that there’s severe damage along Ellis Boulevard near Highway 54.

‘We’re doing okay but praying for those that were caught in damage, some still trapped,’ Missouri Gov. Mike Parson said on Twitter early Thursday.

A National Weather Service meteorologist said: ‘As of this morning, the main parts of the storms have pushed eastward, thank goodness,’ leaving the region to deal with just another expected two inches of rain through Friday.

However, Missouri Public Safety tweeted that there was a possibility of more tornadoes and flash flooding.

First reponders warned that ‘flash flooding hazards will expand as rain continues’. There have also been numerous reports of gas odors.

Authorities confirmed that several buildings had collapsed and photos from one structure appeared to be a Sonic restaurant.

There were also local reports of a bowling alley with heavy damage and a destroyed bank. 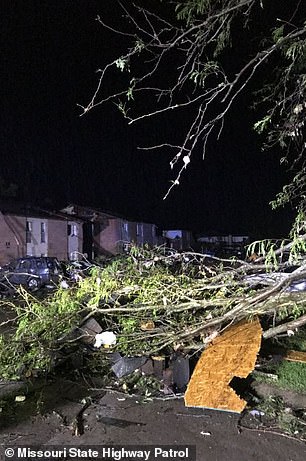 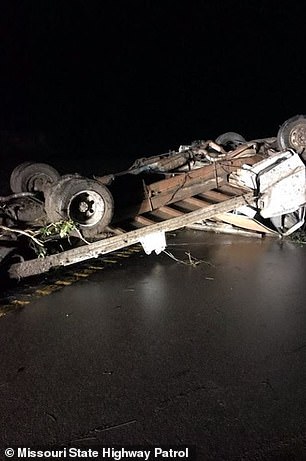 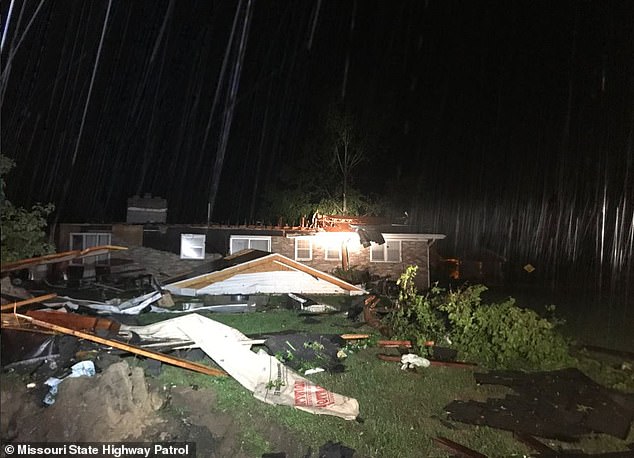 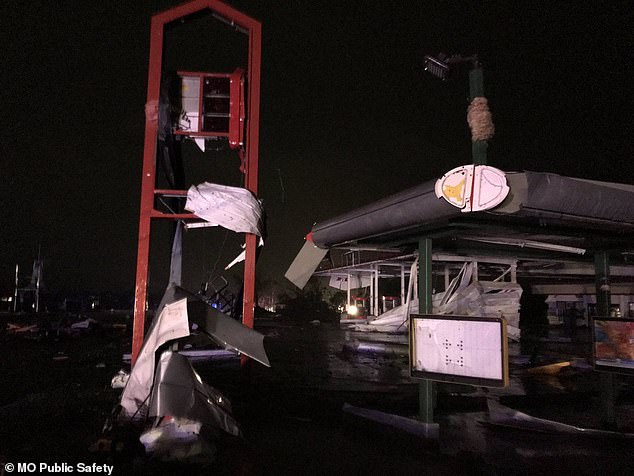 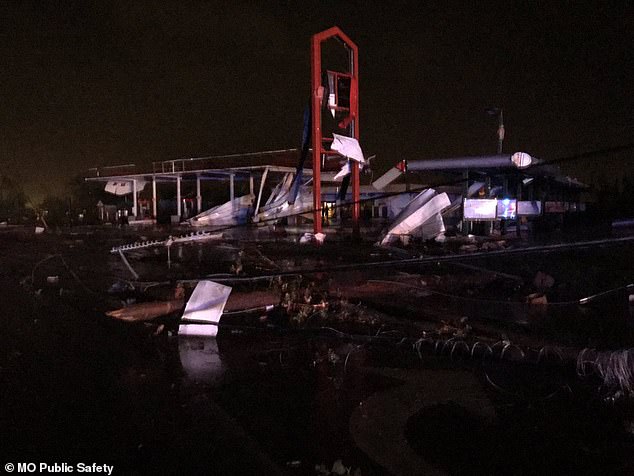 Missouri Governor Mike Parson tweeted late Wednesday night: ‘We’re doing okay but praying for those that were caught in damage, some are still trapped – local emergency crews are on site and assisting.

Parson said first responders will ‘continue to monitor and assist throughout the severe storms lasting until morning. Stay safe and alert!’

Numerous power lines have been downed in Jefferson City and there’s debris in the streets that includes large pieces of wood and concrete.

Jefferson City police Lt Dave Williams estimated that only about five to 10 homes are in the area that’s under a mandatory evacuation.

As a precaution, the Missouri National Guard also moved four helicopters out of the city’s airport, which also is on the north side of the river. And a Memorial Day weekend airshow was canceled.

The NWS issued tornado warnings for several Missouri towns until 1am CDT.

For the third consecutive day, dangerous storms prompted numerous tornado warnings and reports of twisters touching down, mostly in Missouri and Oklahoma.

The NWS said it had received 22 reports of tornadoes by late Wednesday evening, although some of those could be duplicate reporting of the same twister. 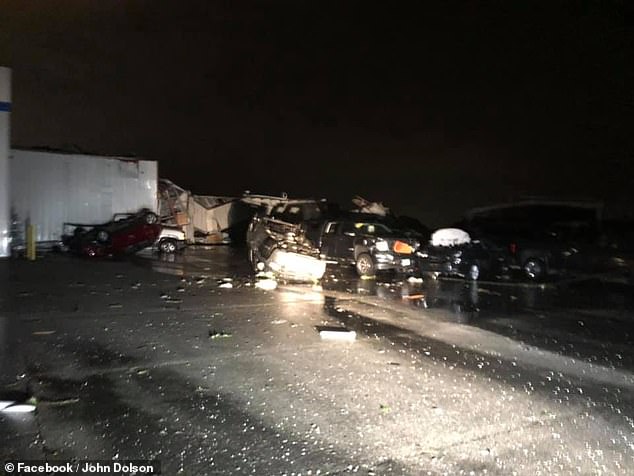 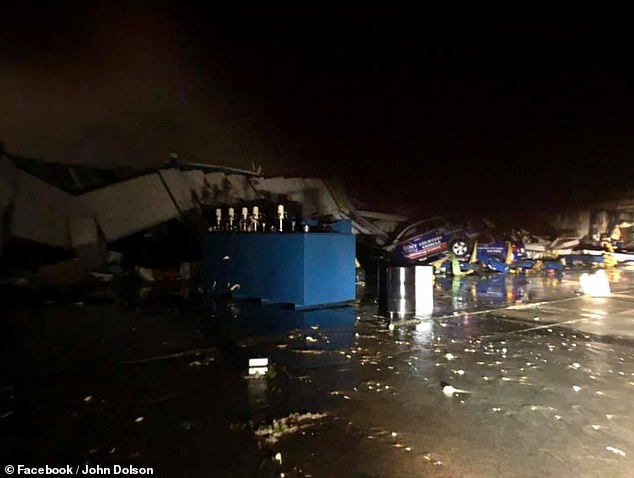 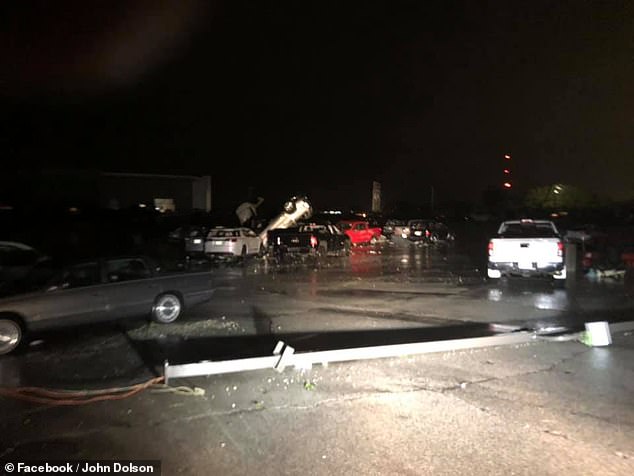 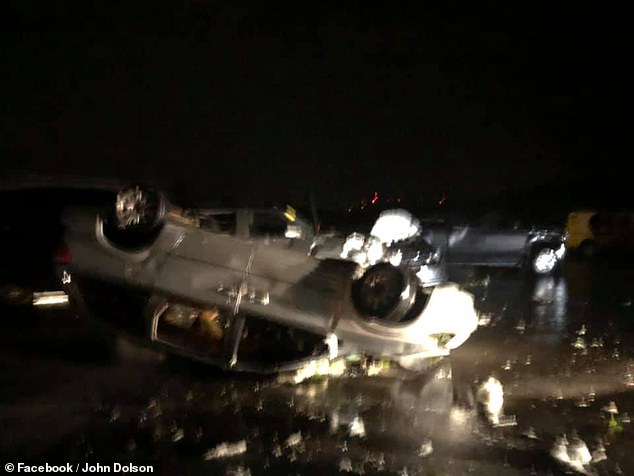 One tornado skirted just a few miles north of Joplin, Missouri, on the eighth anniversary of a catastrophic tornado that killed 161 people in the city.

The Joplin tornado on May 22, 2011, was one of the strongest and most destructive in US history.

The tornado caused some damage in the town of Carl Junction, about 4 miles north of the Joplin airport.

Law enforcement confirmed three fatalities in the Golden City area of Barton County and several injuries in the Carl Junction area of Jasper County from the tornado that hit Joplin.

The Arkansas River was approaching historic highs, while the already high Missouri and Mississippi Rivers were again rising after a multi-day stretch of storms that produced dozens of tornadoes.

Officials said the Mississippi River was at or approaching major flood stage from Iowa through southern Missouri and Illinois. 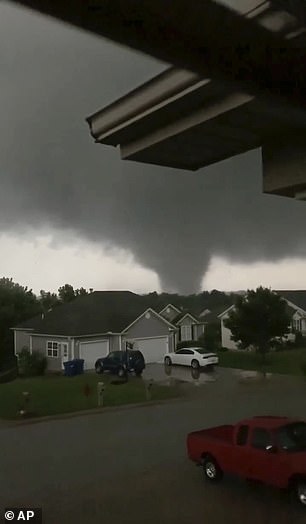 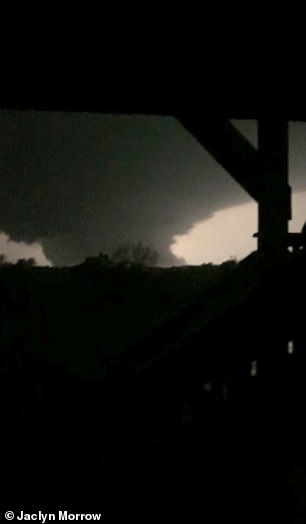 The NWS said it had received 22 reports of tornadoes by late Wednesday evening, although some of those could be duplicate reporting of the same twister. One tornado (pictured) skirted just a few miles north of Joplin, Missouri 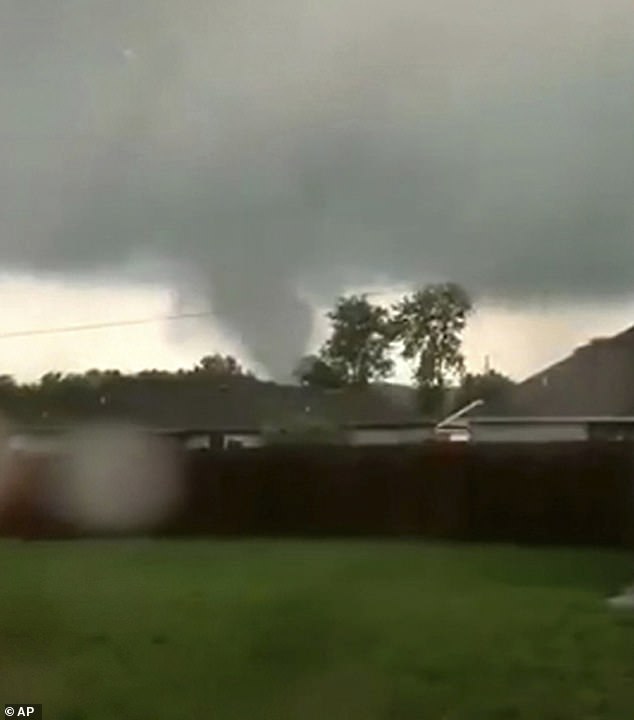 The tornado caused some damage in the town of Carl Junction (pictured), about 4 miles north of the Joplin airport 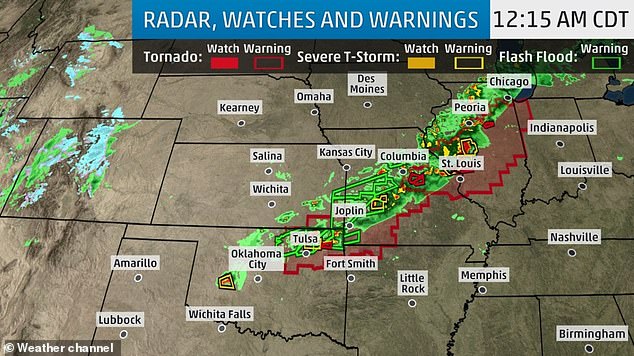 For the third consecutive day, dangerous storms prompted numerous tornado warnings and reports of twisters touching down, mostly in Missouri and Oklahoma

In St Louis, the Mississippi was expected to crest Monday at nearly 12 feet above flood stage.

If that holds, the Coast Guard will likely close the river to navigation for the second time this month.

Along the Missouri River, about 50 levees in Missouri could be overtopped by Saturday as high water levels move downstream, according to the Army Corps of Engineers.

The river was expected to crest Thursday at 36.1 feet near the town of Glasgow, Missouri, overtopping agricultural levees and inundating some homes, highways and parkland.

The deluge inundated roadways, closing highways in 22 Oklahoma counties and 17 Kansas counties, along with more than 330 Missouri roads.

Amtrak suspended train service Wednesday and Thursday along a route between St Louis and Kansas City because of congestion and flood-related delays.

Deaths from this week’s storms include a 74-year-old woman found early Wednesday morning in Iowa.

Officials there say she was killed by a possible tornado that damaged a farmstead in Adair County.

Missouri authorities said heavy rain was a contributing factor in the deaths of two people in a traffic accident Tuesday near Springfield.

A fourth weather-related death may have occurred in Oklahoma, where the Highway Patrol said a woman apparently drowned after driving around a barricade Tuesday near Perkins, about 45 miles northeast of Oklahoma City.

The unidentified woman’s body was sent to the state medical examiner’s office to confirm the cause of death.

Oklahoma Department of Emergency Management spokeswoman Keli Cain said she isn’t yet listed as what would be the state’s first storm-related death.

Does DOJ want to charge The Don?

IDF drills for a devastating war on home soil and away…