Chairman of the House Judiciary Committee Jerry Nadler appeared weak and on the verge of passing out at a presser held by New York City Mayor Bill de Blasio Friday morning in Manhattan.

The mayor is speaking — and then there’s a sudden commotion. De Blasio and others move to help an extremely pale Nadler as he sits, a ghost-like look on his face, in the chairs at P.S. 199 on the Upper West Side.

Nadler had given remarks at an event about speed enforcement cameras in school zones when he slumped in his chair. At one point, video shows de Blasio offer a drink from his water bottle to Nadler and tell him he looks a bit dehydrated.

When de Blasio asks Nadler if he is OK, Nadler can be heard responding with a faint “no” before putting his hand over his face. Moments later he seemed to recover a bit and was able to speak; the Democrat was given water to drink and an orange to eat as de Blasio cleared the school gym to assist in the response.

Nadler was then wheeled out on a stretcher to an ambulance that backed up into an alley behind the school. De Blasio was seen by his side, escorting Nadler to the ambulance.

In a statement, Nadler’s spokesperson said, “He is okay. Seems to have been dehydrated and it was very warm in the room. He is now responsive and receiving a check-up.”

McGahn Is No-Show at Congressional Hearing 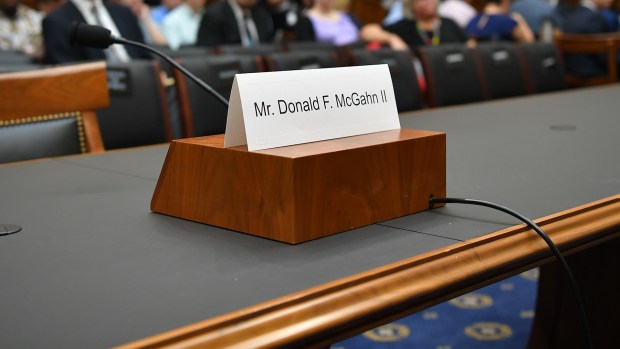 “Congressman Nadler is doing much better. I spent time with him, the medical personnel, the EMTs who responded. He got more energetic with every passing minute,” de Blasio said, adding that it was “comforting” to see Nadler back to “his old self.”

“We are very hopeful he’ll make a very speedy recovery,” de Blasio went on to say.

In a subsequent tweet, Nadler said: “Appreciate everyone’s concern. Was very warm in the room this morning, was obviously dehydrated and felt a bit ill. Glad to receive fluids and am feeling much better. Thank you for your thoughts.”

Though he couldn’t share specific health information or medical history, Dr. Ted Long from NYC Health + Hospitals, who was at the speed camera press conference, went to Nadler’s aid right away. He said Nadler was able to answer all of the medical personnel’s questions right away.

Additionally, Long said that whenever someone looks like they are falling asleep, dehydration is always a concern. However, Long said it is “presumptuous” to know exactly what went wrong without performing the appropriate tests.

This development comes as Nadler has been locked in subpoena battles with the Trump administration and has been in negotiations for special counsel Robert Mueller to testify before the committee.

Nadler has made repeated efforts for Mueller to speak in front of Congress. On “The Rachel Maddow Show” Thursday night, Nadler said Mueller told him that he is willing to make a public opening statement, but leave his testimony behind closed doors.