A former Marine, a fourth generation member of the U.S. military, cut an ad recently for his campaign for congress that is now being deliberately misrepresented, and he is being smeared, by Democrats and members of the press.

NOTE: THE WORDS ‘CUT AN AD’ IN THE ABOVE SENTENCE SHOULD NOT BE TAKEN TO MEAN ANYTHING VIOLENT.

But bad faith Democrats and mainstream media hacks are pretending that they haven’t spoken English all their lives, and don’t understand metaphor, terms of art, narratives, or campaign ads. And therefore, the white opposition candidate Carolyn Bourdeaux is capitalizing on the moment to try to find some kind of advantage over the young, black, war veteran from a family with a history of service to this country.

Naturally, the media is playing dutifully along. Check out the video below.

NOTE: CHECK OUT DOES NOT MEAN DIE IN THE SENTENCE ABOVE, BUT JUST THAT YOU SHOULD WATCH THE VIDEO.

What they want is for you to say “oh that’s somewhat ambiguous” or “I could see how someone could take it that way, using a literal interpretation,” but, you know, don’t. Because that’s preposterous. Things don’t happen in a vacuum.

In order for them to say there is even a slight chance that you could take this to mean that he’s threatening to shoot to Alexandria Ocasio-Cortez and Bernie Sanders to death, you have to evaporate all knowledge of the Marine Corps, American veterans (who Democrats pretend to like on holidays like Memorial Day), word usage and meaning, and the most basic standards of common communication and speech.

You have to lie, in other words. To yourself and everyone else. And you can see them tying themselves in knots trying not to show that they know they are lying.

Take, for example, the reaction of his white Democrat opponent Bourdeaux. She tweeted: “Violence has absolutely no place in our public discourse & I denounce this abhorrent video in the strongest possible term. This message doesn’t represent GA values & for Harrison Floyd to enter this race by inciting violence is wrong.”

Do you know what she didn’t say? She didn’t say “call the Secret Service, this man threatened to shoot a sitting member of Congress to death.” Do you know why she didn’t say that? Because it is absolutely idiotically insane and literally no one thinks that. It is preposterously, impressively stupid. Law enforcement would laugh in her face.

I dare her. I dare you, Carolyn Bordeaux. I dare you to report him to the FBI. Accuses him of violence somewhere other than in a tweet designed to get the media to fawn over you.

Oh, speaking of the media fawning: it’s bad enough for a Democrat trying desperately to be relevant to lie to herself and others about how English works. (Or tell the truth about what she thinks of American veterans.) But the trash below from the New York Post is outright despicable, and they should issue a retraction and an apology.

Look at this garbage. 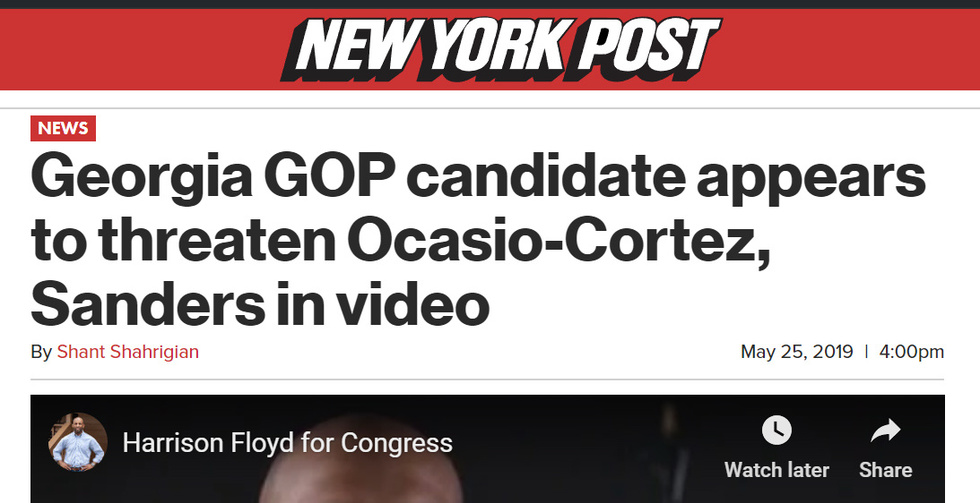 Look at those weasel words: “appears” to “threaten.”

Hmm, threaten what, Shant Shahrigian? Why weren’t you more clear? “Appears?” Do you think that’s what he did or not? Threaten their jobs? Threaten their lives? Speak up, Shant.

A congressional candidate in Georgia is targeting Rep. Alexandria Ocasio-Cortez and Sen. Bernie Sanders all but literally.

See that? The suggestion of impropriety without the explicit explanation for how this is what was implied. “All but literally” he says. And then he brings up death threats, just to associate this with death threats, something neither he nor Carolyn Bordeaux will state directly. They want you to connect the dots, and they drew the dots really close together for you. All but literally.

But is this campaign video a death threat? Shahrigian and Bordeaux should answer up, chop chop.

NOTE: CHOP CHOP IS SLANG PHRASE WHICH MEANS DO SOMETHING QUICKLY AND SHOULD NOT BE CONSIDERED AXE RELATED VIOLENCE

What makes this the most outrageous is how pro forma it is. Shahrigian was almost certainly fed the story by the campaign. I’ve been writing about politics for a decade and a half. Believe me, they sent this story around. And the Post article is practically cookie-cutter. His quote, her quote, link to death threats, file that puppy and get back to tweeting about Pinterest and Whole Foods or whatever is the latest millennial dystopian nightmare.

It didn’t stop with the lazy New York Post cough reporter cough, and the white, civilian, public policy professor and Democrat running against Floyd. No, social justice activist Shaun King also got involved. He didn’t say “this is a threat to commit a literal and genuine violent act against a sitting member of Congress and member of the Senate. Nope. He just said this.

The implication of impropriety without the explanation. Again.

Now, some of you many not be familiar with Shaun King. Which is fine.

Jeff Dunetz and Joe Newby at The Lid have some other Twitter reactions that will steam your collar, too.

The reason they’ve triggered on [NOTE THE WORD TRIGGERED HERE DOES NOT REFER TO A GUN] this isn’t because they think that this former Marine from a family that has served this country for generations actually intends any violence. No. it’s because he’s speaking out against socialism.

The far left believe they have a moment because of Donald Trump. They are pulling out all the stops, forcing every hand, laying down all the markers to make socialism both the primary message of the Democrat party and a mainstream part of American life.

And they don’t care who they smear to do it. In fact, being able to smear an American veteran is just a nice bonus for them.

NOTE: NOW WATCH THEM IS A FIGURE OF SPEECH AND SHOULD NOT BE CONSTRUED AS MEANING ANYTHING BINOCULAR OR GOOGLE EARTH RELATED.

Then again, if you feel like visiting their Twitter and asking them, “do you think Harrison Floyd threatened to murder Alexandria Ocasio-Cortez and, if so, why haven’t you done anything about it?” well .. hey, that’s your business. As a fellow former United States Marine, I offer only a Semper Fi. Oh, and this link to Floyd’s website.