June 3 and 4, 2019, marks the 30th anniversary of the Tiananmen Square Massacre. The following is what I observed during those fateful and sad days in Beijing – when Chinese Communist People’s Liberation Army (PLA) troops killed, maimed, or incarcerated several thousand of their own unarmed countrymen and women.

I arrived in Beijing on an afternoon flight from Singapore on June 2, 1989, on U.S. State Department assignment. I was filled with excitement – eager to see Chinese demonstrators who had gathered in Tiananmen Square peacefully for several weeks protesting their communist masters for more freedom and attempting to follow the lead of other people in Eastern Europe and former Soviet republics who already began the process of shedding their communist chains.

After arrival, I was transported to a local hotel catering to Westerners (Toronto Beijing), located on one of Beijing’s main thoroughfares, not far from the U.S. Embassy and Tiananmen Square. I immediately went from the hotel to the street to mingle with a generally euphoric and friendly public crowd – on their bicycles, and in their Beijing-unique street corner groups – chatting about the unfolding events and seemingly hoping for the best.

Amidst the euphoria and excitement, I encountered danger lurking just a few blocks from the hotel in the form of a large convoy of Chinese military troop trucks, laden with armed soldiers and blocking several bridges and thoroughfares to the square. Brave local citizens, only armed with words, circled every one of those trucks trying to dissuade the troops from entering the square and turn their weapons on peaceful demonstrators.

Walking among them, it was apparent that I was about to bear witness to a historic event as China’s oppressed population sought more freedom, liberty, and dignity from communist rulers. I was greeted by most locals with warm smiles and by the armed troops in the trucks with cold stares.

After a few hours of circulating among the people and the troops, and taking a few photos (risky business in the middle of military operations in a hostile foreign country), I retired to the hotel for the evening. And it was early Sunday morning (about 2 or 3 a.m.) when I received a call from the embassy that the troops had begun killing demonstrators. 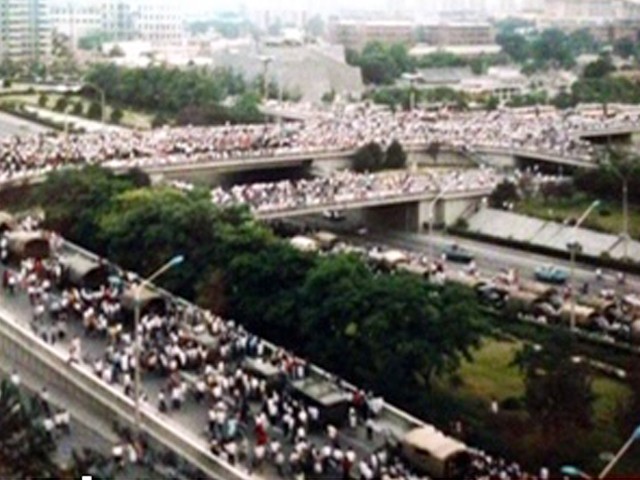 What ensued afterward became one of the most memorable days of my life as I watched events unfold from the hotel room, lobby, and the street. A few hours after the troops took action to disperse the demonstrators in and around the streets of Tiananmen, the military deployed a convoy of tanks down a main avenue and stopped in front of our hotel.

It was at that moment I witnessed the spirit of freedom in action. Against overwhelming odds, those sympathetic to the freedom movement fought back without weapons. Some attempted to stop the tanks by erecting barricades and blowing up cars, buses, and trucks on the street in a futile attempt to prevent the convoy from moving forward. Eventually, the troops in the tanks used machine gun fire to disperse demonstrators and, for good measure, directed a few warning shots towards our hotel to prevent Westerners from observing what was happening.

The tanks eventually burst through burning debris and headed down the avenue towards Tiananmen. Afterward, I went into the street to comfort some of the locals. Their faces were filled with horror and voices with anguished cries. Various sources suggest that death casualties among the locals ranged several hundred to several thousand – but no one knows for sure because of the communist government’s tight control of information. In a span of just a few short hours, I witnessed the spark of freedom, and saw it extinguished. And I decided forthwith that speaking out on behalf of freedom would be a life passion.

How did the U.S. respond to that atrocity? Rather tepidly in the long run.

A series of U.S. presidential administrations – George H.W. Bush, William Clinton, George W. Bush, and Barack Obama – basically followed a path of not severely punishing China but helping it develop economically, ostensibly as a way to entice its government to eventually let its people enjoy more political freedom, and hoping it would become less a hostile national security threat to the United States. 30 years later, it’s difficult to say that approach has succeeded other than making China a much wealthier country which disproportionately benefits its ruling communist class.

For example, China’s 1989 Gross Domestic Product was $348 billion. According to the CIA World Factbook, its 2017 GDP was $23.2 trillion, surpassing the U.S. and making it the world’s largest economy. In 1989, Freedom House (a democracy watchdog group which determines degree which countries grant citizens political rights and civil liberties) gave China its worst ranking of “Not Free.” In 2018, that ranking remained the same.

Many Americans also question if U.S. policies have made the Chinese government less hostile towards the United States. It appears not. China has repeatedly targeted U.S. aerospace, energy, information technology, satellites and telecommunications, public administration, and research and consulting firms for attack, with the stolen information used to wage continual economic, military, and political sabotage and warfare against the United States.

In 2013, A Virginia-based cybersecurity firm, Mandiant, in a report titled, “Exposing One of China’s Cyber Espionage Units,” reportedly traced 141 major hacking attempts to China’s People’s Liberation Army spanning 20 major industries since 2006 — 115 of them against U.S. targets.

In 2015, the U.S. government disclosed that Chinese hackers breached U.S. Office of Personnel Management computer system and accessed the personnel and security records of some 22 million Americans.

President Donald Trump appears committed to reversing U.S. policies with China that haven’t had the desired effect and which harm U.S. security interests on these and a host of other issues. As he ponders the changes, he should never forget the brave Chinese people who stood up to communist tyranny 30 years ago in and around Tiananmen Square. It is within their ranks, not those of the current communist regime, where a yearning for freedom and a better life still exists. Let’s hope on this anniversary that President Trump honors the memory of Chinese martyrs who sacrificed lives and physical well-being for freedom’s cause, and succeeds in implementing new China policies that will benefit freedom-loving Chinese people and American businesses, entrepreneurs, and consumers instead of China’s wealthy communist dictators.

Fred Gedrich is a foreign policy and national security analyst. He served in the U.S. departments of State and Defense. Overwhelming Majority of U.S. Voters Believe Valid ID Should Be Required in Elections