A Catholic priest was blasted on Twitter for asking “ladies” to dress modestly to “protect the purity of men at holy Mass.” And while Father Kevin M. Cusick later tweeted that he isn’t backing down from his request, it appears his Twitter account has since been deleted.

Cusick on Monday posted the following tweet: “Ladies, a priest I know was forced on Sunday to ask a woman at Mass to cover her shoulders. Please help the priest to protect the purity of the men at holy Mass by choosing to dress modestly. The alternative is awkward for all involved. Thank you.”

But not everyone was against Cusick’s plea.

“I am honestly very saddened by how many women take a ‘not my problem’ stance when it comes to how men feel when exposed to the way most women dress today,” Catholic writer Stephanie Nicholas noted. “Have you considered speaking to good, godly men and seeing what they think?”

Later on Monday Cuscik said he wasn’t about to bow down to the outcry against his tweet.

“By the way: I’m not backing down from this,” he tweeted. “I’ve thought about it, I’ve prayed about it, and I’m not to going to engage in the endless Vatican II style debate that goes back-and-forth constantly and ends up nowhere.” 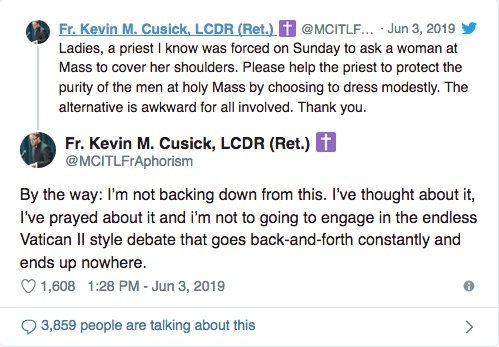 But as of Wednesday morning, it appeared his entire Twitter page had been deleted.

However, Cusick did tell Yahoo Lifestyle that “Twitter does not lend itself well to some sensitive subjects” and that “even though we may have a very valid point to make sometimes it just happens that we don’t express it in a way that takes into account certain sensitivities and so because of that somebody becomes offended when that wasn’t intended at all.” Deneen Borelli: Mark Zuckerberg, I hold you responsible for the high-tech lynching of my job.